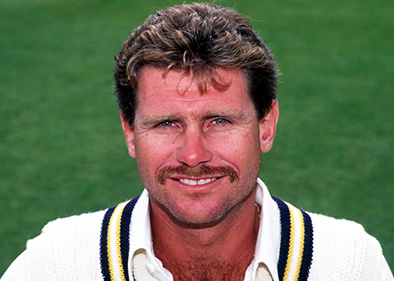 South African cricket speaker and player Robin Smith is better known by some as ‘The Judge’, playing for England thanks to his English parents from the mid 1980’s, Smith was unable to play for his country of birth because of the apartheid ban that prevented South Africa from taking part in International cricket. Smith was best known for his abilities against fast bowling, with what was regarded as a trademark square-cut that was hit ferociously and regarded by many as the hardest hitting batsman cricket had ever seen. Having enjoyed a prolific career as a player Smith now works extensively as a cricket speaker travelling across the UK delivering thoroughly entertaining and informative performances.

Beginning his career playing for Natal in South Africa, Smith joined Hampshire CCC in 1982 and remained at the club for over two decades. Captaining the county for four years, Robin shares the leadership and tactical advise that allowed him to succeed as a captain during his work as a cricket speaker. Playing over 850 matches in professional cricket, Robin Smith scored over 40,000 runs including almost 90 centuries at an average of over 40. As a cricket speaker Robin discusses his domestic career and expresses his gratitude and affection for county cricket.

Representing England in 62 Test Matches and 71 One Day Internationals, Smith immediately took to International cricket and proved to be England’s only successful batsman in his first Ashes Series contributing two wonderful centuries. Robin’s highest test score, 175 came against the West Indies in Antigua and was made in reply to Brian Lara's record-breaking innings of 375 showcasing his ability to concentrate for long periods of time and respond positively to high pressure situations. Smith became renowned for his performances against the West Indies and was widely regarded as one of England's most courageous players. He was targeted by the West Indies at Antigua in 1989–90 by fast short pitched bowling giving him no room for his favourite shots. During that innings, he was hit on the finger and hit flush on the jaw by a bouncer from Courtney Walsh – but neither blow forced him to retire hurt. This remarkable sign of character and strength earnt Smith huge respect and praise from around the world and also makes for fascinating content during his work as a cricket speaker.

A devastating batsman in One Day International cricket, Smith scored 167 not out for England against Australia in the 1993 Texaco Trophy in a game that Australia went on to win by six wickets. This was the highest score made by an England batsman in a One Day International and was the highest score made by any batsman who finished on the losing side in such a game, both of which have since been broken. Despite these performances Smith was dropped from the England team and the decision was popularly perceived as premature, particularly given his Test batting average of over 43 at the time. This was supported by the ICC's historical rankings of Test batsmen, which placed Smith as the 77th greatest batsman in history and 17th greatest Englishman. As a cricket speaker, Smith discusses his feelings when he was left out of the team along with the extensive supported he received from fans and his counterparts both of which he is hugely grateful to.

Before he scored a staggering 175 against the West Indies, England coach Duncan Fletcher accused Smith of ‘having too many fingers in too many pies’, this remark undoubtedly played a huge role in Smith’s deselection and is fascinating topic he breaches during his work as a cricket speaker and one that is not to be missed. Robin Smith ended his International career with over 6,500 runs to his name at an average of over 40.

Since retiring Smith often appears as the cricket speaker at club events for his former County Hampshire CCC where he remains a revered and cherished figure. Remembered as one of the club’s most successful players Smith continues to draw a crowd to his appearances and garners much recognition for his work as both a sports speaker and cricketer. Regularly touring the UK sharing his experiences from within the world of cricket and commenting on what remains one of the world’s most popular cricket speakers on the after dinner speaker circuit. The former Wisden Cricketer of the Year, Robin Smith has a host of entertaining and insightful tales and anecdotes to share along with an abundance of knowledge and experience. The consummate professional who is still used as a comparison when discussing both the finest and hardest hitting batsman to play for England, Robin Smith is available to hire as a cricket speaker for any cricket event, dinner or awards presentation and is certain to be the idyllic addition to any occasion.

When he’s at corporate events, Robin is known to cover the following topics: