Pioneering cricketer and former England captain, Alastair Cook, is one of the top cricket speakers on the circuit. His presentations leave a positive impact on audiences, through actionable strategies for leadership, teamwork and overcoming adversity. Armed with a sportsman's mindset, he can positively influence his guest's perception of success.

Let's answer the question; who is Alastair Cook?

Alastair is considered to be one of the best batsman in modern cricket, ranked as the fifth highest Test run scorer of all time. Having nurtured an unrivalled skillset, he is the most-capped player in England history, a testament to Alastair's unwavering dedication to the sport. Since his debut in 2003, Alastair scored 1,000 runs in his maiden before he made centuries in his first Test match.

During the 2009 Ashes series, Alastair is credited for England's first place finish, thanks to his quick thinking and keen, calculated eye for the ball. Such success secured his full time captaincy role, which then resulted in England's first Test series victory in India since 1984. By 2015, Alastair was the top run-scorer in Test matches for England. In celebration, he was knighted in 2016 as Alastair Cook CBE.

A testament to his incredible on-pitch skill and determination, Alastair's statistics position him as a standout leader within the sport.

As a speaker, Alastair discusses with audiences the highs and lows of his elite career. Having experienced first hand the challenges of top level competing, he supplies transferrable strategies for corporate audiences designed to reignite a professional team. Alastair's actionable strategies are influenced by his career as a country-leading captain, an experience that has shaped him as a sportsman, and a speaker.

When booked for after dinner events, Alastair invites audiences to enjoy his thrilling life story. Charismatic, engaging and interesting, he is as natural on the stage as he was in the pitch, exuding effortless confidence. An event featuring Alastair is a surefire success, as he resonates with audiences of all ages.

When attending events, Alastair can discuss the following speaking topics:

To book Alastair Cook or one of our other top class cricket speakers, simply contact a member of our team today by filling in our online contact form or you can call us directly on 0207 1010 553. 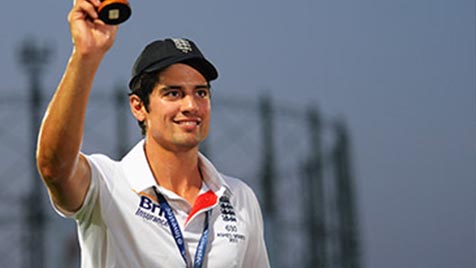