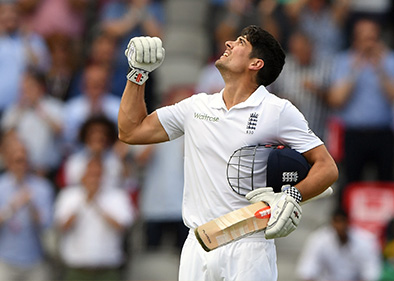 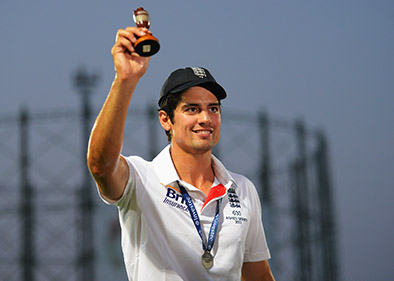 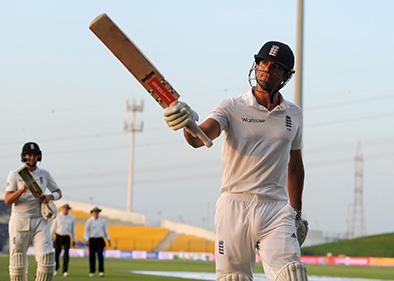 Alastair Cook CBE is a current England cricket player and former England Captain, widely heralded as one of the greatest players to ever represent England and has a host of records and accolades to his name. Cook is England’s most capped Test player of all time and is also the country’s leading Test run scorer with over 12,000 runs to his name and often compared against the greats of the game. A truly eloquent and compelling personality, Alastair Cook is an incredibly popular figure on the after dinner speakers circuit where he works predominately as a cricket speaker sharing his diverse knowledge and experience of both cricket and leadership alike during his work at cricket events and engagements.

A child prodigy, Alastair Cook CBE attended Bedford School where he was a keen and successful musician, he however gained headlines as a 14 year old when Marylebone Cricket Club came to play against Bedford School First XI and were a player short. The MCC drafted the first year student to supposedly make up the numbers however Cook’s elegance and talent shone through as he scored a century against his own schools First XI, a day that would propel Cook to achieve great heights within the game. Alastair was selected in the Essex Cricket Academy at the age of 16 and following his record breaking school boy cricket career which saw him shatter all records scoring 17 centuries and over 4,000 runs, Alastair Cook CBE made his First Class debut for Essex CCC against Nottinghamshire CCC in 2003. Having quickly secured his place within the Essex team, Cook’s maiden First Class century came against Leicestershire County Cricket Club where he made 126 which along with other impressive performances gained the attention of people across the nation.

Cook was selected to play for The MCC in the First Class season opening match against Champions, Warwickshire CCC, a game in which Cook stamped his authority. Alastair Cook made a century in the first season followed by 97 in the second innings, this however would not be his highlight, with The Ashes soon approaching, Australia played a Tour Match against Essex and Cook certainly made a lasting impression scoring a double century against the old enemy and is an experience he speaks fondly of during his performances as a cricket speaker. This double century further bolstered Cook’s reputation and came just a few days following him being named the PCA Young Player of the Year.

Cook was the integral part of Essex’s Totesport League Title winning campaign and his success earnt him a place of ECB National Academy Tour of the West Indies. Having both played for and captained England Youth teams during the infancy of his career, Cook was called up to the England XI following an illness to England opener, Marcus Trescothick. Cook was welcomed into the England team and instantly made an impact scoring a half century in his first innings in Test cricket followed by a century in the second innings making Cook just the 16th England player to score a Test Century on debut, this innings would cement Cook’s place within the team.

Following a couple more centuries, Cook became the first England player ever to score four Test match centuries before the age of 22 and was nominated for the ICC Emerging Player of the Year award. Following a few years where Cook was an integral part of the England Test match team and quickly establishing himself as arguably the greatest opener to play for England his involvement within the One Day International was less consistent despite his performances and prowess and Cook discusses the trials, tribulations and challenges that his sporadic selections had during his work as a cricket speaker.

Alastair Cook CBE first captained England in 2010, during his first match in charge Cook scored a century in his first innings and in the second innings he passed the landmark of 4000 Test match runs and by doing so became the youngest Englishman to pass the landmark. The 2010/11 Ashes is a series that Cook will forever be proud of from a personal point of view, scoring 766 runs in the five match series, the second highest total runs scored in a series, during one innings Cook spent over 1000 minutes at the crease and this alone makes for fascinating content during his work as a cricket speaker as he provides an insight into the unthinkable. Cook’s two centuries to go with a double century saw him unsurprisingly named as the Man of the Series.

Named the full time England captain in 2012, following sustained success as a player and vice-captain along with being crucial to the teams success in winning the 2009 Ashes and the retention of The Ashes. Cook unforgettably and historically led England to their first Test series win against India since 1984/85 and also during the same series became the first player ever to score five centuries in their five matches as captain, a quite remarkable achievement that is reminisced on during his work as a cricket speaker.

Following a number of successful years as a player and captain, Cook stood down as the Test Captain following the 2016 tour of India after 59 matches in charge. An incredibly proud and successful captain, Cook remains honoured of having had the privilege of captaining his nation and during his tenure as a captain continued to break individual records as he became the youngest batsman to score 10,000 Test runs beating the legendary Sachin Tendulkar’s record as well as breaking the record of the great Indian batsman Sunil Gavaskar in passing 9,607 runs and becoming the highest Test scoring opener of all time.

Currently playing as a batter alone as he has given up his leadership responsibilities, Cook scored a double century against Australia during the 2017 Ashes Series scoring 244 not out and in doing so became the highest score by an opener who has carried his bat through an entire innings. A spectacular innings to date, Alastair Cook CBE is England’s most capped player, England’s most capped Test player and has also scored the most Test centuries as captain.

The youngest Englishman to score 2000, 3000, 4000, 5000 and 6000 Test Match runs and the youngest player ever to score 7000, 8000, 9000, 10000, 11000 and 12000 Test Match runs, the 2012 Wisden Cricketer of the Year will certainly be remembered as a legend of the game and his incredible accolades are a testament to his wonderful talents that have led to mind boggling exploits. With over 15,000 International runs, 37 International centuries, International captaincy and a host of records to his name, Alastair Cook CBE is available to hire as a cricket speaker and is certain to be fantastic addition to any event.

Cook truly is a remarkable player and incredibly intelligent and captivating speaker, with a host of tales and anecdotes from a thoroughly distinguished career that has garnered experiences from across the cricketing world, the former England captain and England’s most successful batsman ever will provide an unforgettable cricket event or dinner.

To book Former England Captain, Alastair Cook CBE, as the cricket speaker for your corporate event, function or conference, simply contact the Champions Cricket Speakers agency by filling in our online contact form. Alternatively, call a booking agent directly on 0207 1010 553.