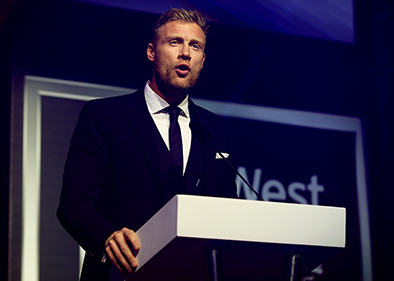 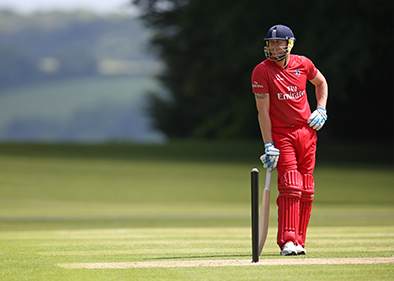 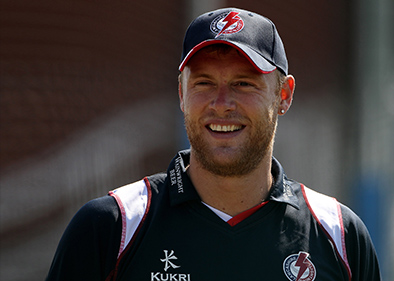 Andrew Flintoff MBE is a former England Cricketer, captain and TV personality who is arguably the most recognisable figure in English cricket. Widely regarded as one of the most effective impactful all-rounders of all time, Flintoff had an incredible ability to change the course of the game and single handily win games of cricket, this highlighted in the infamous 2005 Ashes. Flintoff’s popularity from both his cricketing and his television exploits make him an incredibly sought after speaker that attracts huge audiences and demand for his after dinner speaking engagements where he specialises as a thoroughly entertaining cricket speaker.

A schoolboy prodigy, Flintoff often wrote headlines as a junior through his wonderful ability and recognisable build for a player of such a young age. Destined and touted for great things from his childhood, Flintoff’s hard-hitting batting style was notorious around the cricketing circuit with many left in amazement at the power he we was able to generate. A proud Lancastrian, Flintoff captained England U19s before making his first real impression on English county cricket, in the Quarter-finals of the 2000 Natwest Trophy against Surrey CCC, Flintoff scored 135 not out in innings that was described by England legend, David Gower as "the most awesome innings we are ever going to see on a cricket field". Despite his tremendous achievements on the field, Flintoff’s fitness, professionalism and weight came under great scrutiny from the England management along with his lack of consistency. During his work as a cricket speaker, Flintoff speaks of his struggles with his lifestyle and consistency disclosing unique insights into the requirements and struggles of professional cricket.

An abundance of talent, a couple of years after his Test Match debut in 1998, following a One Day International Man of the Match performance Flintoff infamously said ‘not bad for a fat lad’ in response to his numerous critics and this is something he amusingly reminisces upon during his work as a cricket speaker. Despite his often lack of reliability early on in his career, Flintoff was often trusted in crucial moments during matches and is remembered for the last over he bowled against India where he was tasked to defend 11 runs, something he successfully did after he ran out Anil Kumble and bowled Javagal Srinath with successive balls to win the match and become the hero for India. Flintoff’s celebration however stile the headlines as he famously took off his shirt and did a lap of the ground in celebration, something that would later haunt him as he was which mimicked by India’s captain, Sourav Ganguly in a later match at Lords following India’s series victory.

A lifestyle change led to Flintoff’s consistency going through the roof and allowed to him emerge as a major force in world cricket and a reward for his hard work soon followed as Freddie as he is affectionately know made his maiden Test hundred. Averaging just 19 with the bat and 47 with the ball at the end of 2002, a quite magnificent few seasons which included the 2005 Ashes saw Flintoff’s batting average rise to 43 and his bowling average to 28, world class figures! Flintoff’s dominance in 2004 led to him being named the Wisden Cricketer of the Year along with the ICC One Day Player of the Year award.

The 2005 Ashes cemented Flintoff’s name in cricketing history as he was an integral member of the England team that captured the hearts, minds and attention of the nation. The Man of the Series for his extraordinary efforts and performances, Flintoff became legendary from his exploits in the series both for his performances on the field and his antics following. Named the BBC Sports Personality of the Year for his heroics as well as receiving the prestigious Sir Garfield Sobers Trophy crowning him the ICC Player of the Year, Flintoff was also rewarded with an MBE. The proudest moment of his career, Flintoff fondly recounts a historic period in the history of English cricket and the biggest achievement of his career as well as hilariously recounting his well-documented celebrations, tales that are not to be missed during his performances as a cricket speaker.

Often plagued by injury, Flintoff represented England in three World Cup campaigns as well as joining an elite group by scoring over 3,000 runs and taking over 150 wickets in One Day Internationals. Flintoff’s Test numbers were also impressive as he scored over 2000 runs to go with 200 wickets and in doing so became one of only seven players to have their named etched on both historic Lord’s honours boards. Experiences in the Indian Premier League and the Big Bash as well as a comeback in English cricket where he once again captured the hearts of the nation and narrowly missed out the coveted Twenty20 trophy, Flintoff has a host of tales and anecdotes to share with guests at any event.

An incredibly popular personality, following his retirement Flintoff has became a TV personality and arguably gained an even larger fan base through his work as a team captain on hit Sky One show, A League of their Own and his various marketing work where he is the face of clothing brand, Jacamo as well as supermarket giants, Morrisons. Flintoff is also a very popular commentator and pundit covering cricket round the world for both Sky Sports and BT Sport often entertaining the crowd with performances dressed as Elvis!

In the headlines for his exploits in cricket and controversies that followed him off the pitch, Flintoff speaks about his encounters with the infamous pedalo and various other drunken frolics during his work as a cricket speaker. A real character and infectious personality coupled with his tremendous cricketing talent, Flintoff is arguably one of the most instantly recognisable cricketing icons in the sport. A relatable cricket speaker with an ability to portray both the fun and serious sides of his career within the game, Andrew Flintoff is the perfect addition to any event as a keynote or after dinner speaker.

A true gentleman, with a kind heart and friendly nature, Andrew ‘Freddie’ Flintoff is a popular cricket speaker and is certain to add a new edge and depth to any event. The current holder of 14 Guinness World records, many of which were achieved during his extensive efforts to to raise money for Sport Relief, Flintoff’s popularity and superiority is at an all-time high. The I’m a Celebrity Get Me Out of Here….Australia contestant, Professional boxer with an unbeaten record that was showcased in a documentary, Flintoff: From Lord's to the Ring, Flintoff truly is an icon.

The former England captain, Ashes winning hero and TV personality, Andrew Flintoff MBE is available to hire as a cricket speaker for any event, function or presentation evening and is certain to leave a lasting impression on any audience and provide a thoroughly entertaining and informative event. A legend of the game, an evening with Andrew Flintoff MBE performing as a cricket speaker is an opportunity not to be missed!

To book Legendary England All-Rounder, Andrew Flintoff MBE, as the cricket speaker for your corporate event, function or conference, simply contact the Champions Cricket Speakers agency by filling in our online contact form. Alternatively, call a booking agent directly on 0207 1010 553.