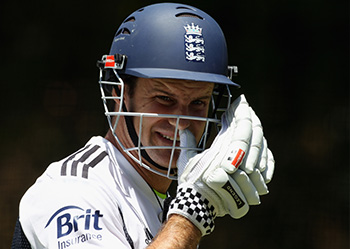 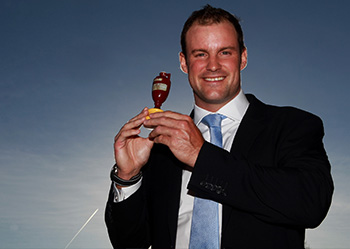 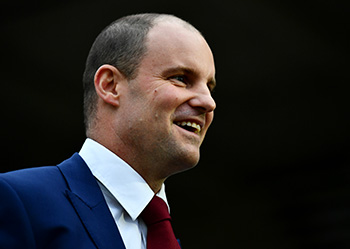 Andrew Strauss OBE is a former England Cricket Captain and opening batsman who is currently the Director of Cricket for the England Cricket team. A prolific batsman renowned for his cut and pull strokes as well as his catching at slip, Strauss is only the third captain to have successfully won the coveted Ashes urn both home and away. During a distinguished career, Andrew Strauss scored over 6,000 test match runs and is widely recognised as the second most successful England captain of all time. An incredibly intelligent and eloquent personality that retired following his 100th One Day International, Strauss is in high demand on the after dinner speaker and often draws large audcienecs during his work as a cricket speaker.

Born in South Africa, Strauss moved to England at the age of six before attending Radley College and continue his education at Durham University where he continued to develop as a fine cricketer. Andrew Strauss went on to make his first class debut in 1998 where me made 83 on his debut after playing extensively for Durham University and Middlesex CCC Second XI. Andrew didn’t enjoy immediately enjoy success at First Class level however two disappointing seasons were followed his maiden First Class hundred which spring boarded him to experience three magnificent seasons which all yielded over 1,000 runs a year allowing Strauss to make a real statement.

Strauss was appointed captain of Middlesex CCC in 2003 before surprisingly making his One Day International debut at the end of 2003 despite seeing himself as a better player in the longer format of the game. Having to wait until 2004 to finally make his Test Match debut, Strauss instantaneously made an impression scoring a 112 on his debut and cemented his name on the Lord’s Honours Board. Strauss speaks of this incredible start to his career during his work as a cricket speaker.

Strauss continued to succeed at the top of the innings in both formats of the game for England and in passing the 1,000 run mark in Test cricket became the fourth fastest Englishman to do so. Initially struggling to find form leading up to the 2005 Ashes, he finished the 2004 summer with a prolific series against Bangladesh to take huge confidence into the Ashes.

An integral member of the historical 2005 Ashes series, Strauss scored 393 runs at an average of almost 40 during the series as well as contributing two vital centuries and taking six critical catches, one of which was an outstretched one handed effort that is widely considered as one of the best catches of all time. During his work as a cricket speaker, Andrew Strauss OBE passionately reminisces on the incredible achievement and record breaking series.

A difficult period in his career followed the Ashes series when in 2007 a string of poor performances saw Andrew be left out of the England team, a difficult experience filled with a host of emotions and disappointment, Strauss relays his feelings and the resilience he showed to regain his form during his performances as a cricket speaker. Recalled into the team the following year, Strauss went on to re-establish his place in the team making for centuries in the year, one of which was a career best 177. Strauss’ vital role within the team and clear leadership credentials led to him being named the England captain following Kevin Pietersen’s resignation.

Andrew Strauss OBE began his captaincy tenure with huge success, scoring three centuries before leading England to a successful 2009 Ashes series, scoring 474 runs and being the leading run scorer in the series. Personally, Strauss continued to succeed in both Test match and ODI cricket however the ICC Champions Trophy and 2011 Ashes eluded him and following this he shortly after announced his retirement which was met with applause from all that were present at the press conference.

An incredibly successful player and leader, Andrew’s accomplishments as a captain display his extensive and distinguished leadership and management qualities. The archetypical England Captain, Strauss led from the front and still remains a role model and benchmark for how to conduct yourself and be the ultimate professional. Arguably one of the best cricket players England has produced, Andrew Strauss OBE is also an incredibly intelligent individual exuding grace and class. Strauss’ wonderful cricketing exploits have seen him be in huge demand in commentary and analysis alongside his extensive and impressive performances as a cricket speaker.

A consummate professional who came into the professional arena as a mature following a career working within the City, Strauss’ knowledge of business and the corporate industry allow him to provide great versatility in his speaking engagements, appealing to audiences as a business and keynote speaker as well as a cricket speaker.

An eloquent speaker who utilises his abundance of knowledge and years of experience within elite Cricket, Strauss is a favourite with many large companies and groups largely due to his ability to deliver inspiring and stimulating keynote speeches and cricket after dinner speeches to conferences and events. A world class performer and incredibly well respected figure within the game, Strauss’ presence at any event is certain to increase its prestige and stature. The man at the helm of English cricket, Andrew Strauss OBE is available to hire as a cricket speaker for any event or function.

To book Former England Captain, Andrew Strauss OBE, as the cricket speaker for your corporate event, function or conference, simply contact the Champions Cricket Speakers agency by filling in our online contact form. Alternatively, call a booking agent directly on 0207 1010 553.