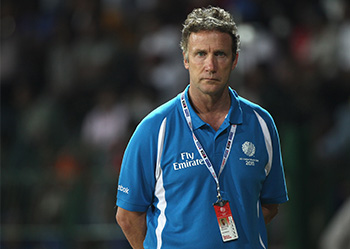 Chris Broad is a former England player who plied his trade as an opening batsman that now works as a match official. The father of current England bowler Stuart Broad, Chris represented England on over 50 occasions playing both Test matches and One Day Internationals. An integral part of the historic 1986/87 Ashes winning team, Chris Broad is very popular figure on the after dinner speaking circuit working extensively as a cricket speaker.

Broad suffered from osteomyelitis at the age of 15, which inevitably delayed his progress as a cricketer. Broad’s First-class debut eventually came when he represented Gloucestershire CCC in 1979 and went on to become an integral part of the team the following season. A move to Nottinghamshire CCC coincided with his Test selection for England in 1984, Broad’s first England series yielded 195 runs at an average of almost 25 however was left out of the team for a few years. Broad speaks of the disappointment of being dropped and how it acted as his motivation to come back a better person during his work as a cricket speaker.

Broad returned to the Test arena in the 1986 Ashes series, this series would be a career defining period for Chris and one that he remains best known for. During the series Broad scored centuries in three matches and in doing so became only the 8th Englishman at the time to achieve the feat. A prolific series for Broad, his 487 runs and three hundreds were crucial to England winning the prestigious and cherished Ashes urn. Broad was named the 1987 International Cricketer of the Year largely thanks to his magnificent Ashes contribution and in the same year made his One Day International debut. During his work as a cricket speaker Chris Broad often reflects upon what was a purple patch in his career and arguably the proudest period in his career.

Shortly after making his ODI debut, Broad was at the centre of tremendous controversy when during England’s 1987 tour of Pakistan he refused to walk despite being given out by the umpire. Refusing to leave the field for over a minute before finally being persuaded to leave the field, Broad was once again under great scrutiny for famously knocking his stumps out the ground after being bowled during the 1988 Sydney Bicentennial Test. Renowned for his temper and inability to control his anger, Broad recollects the controversy and troubles that occurred during his career when he works as a cricket speaker.

An appearance on the 1990 Rebels Tour to South Africa further fuelled the scrutiny and controversy that followed Broad and put a blip in what was otherwise an unblemished and prolific career across the world of cricket. An incredibly successful career domestically as well as internationally, Broad scored over 30,000 domestic runs playing for Gloucestershire CCC, Nottinghamshire CCC and Orange Free State.

Following his retirement as a player, Chris Broad became an ICC Official in 2003 and continues to be an incredibly well respected and successful Match Referee around the world. Having been faced with personal tragedy following the loss of his wife to motor neurone disease, Chris along with his Son, Stuart and daughter, Gemma who has worked as a performance analyst for England, launched The Broad Appeal in an attempt raise both awareness and funds for suffers of MND. A topic incredibly close to his heart, during his work as a cricket speaker Chris Broad expands upon this fantastic charity along with sharing the moving account that traumatised the lives of his family.

A strong-minded individual and fierce competitor, Chris Broad possess a tremendous repertoire of knowledge and experiences that he eloquently shares as a cricket speaker. Chris Broad’s continual involvement within the game at the highest levels only reinforce his superiority within both cricket and after dinner speaking. An entertainer who is certain to provide a thoroughly insightful and compelling event. Chris Broad is available to hire as a cricket speaker for any event, dinner or presentation evening and is certain to provide his opinion on who is the superior cricketer, father or son?