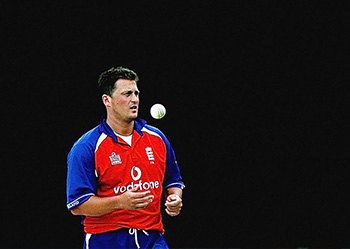 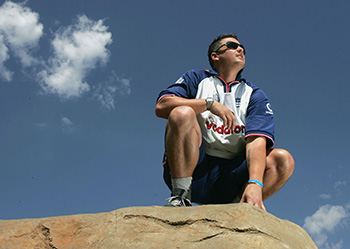 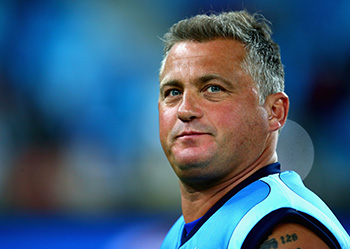 One of England's Greatest Strike Bowlers

Darren Gough is a former England fast bower who became one of the most feared England bowlers of all time. A magnificent exponent of swing bowling, Gough is England’s second highest wicket taker of all time One Day International cricket. A fierce competitor, leader and TV personality, Darren Gough remains one of the most popular and recognisable personalities in English cricket. A treasured and cherished figure who was able to resonate with audiences around the world, Gough’s popularity has transferred to the world of after dinner speaking where he specialises as a cricket speaker.

Following his First Class debut in 1989 for Yorkshire CCC, the county at which he spent the majority of his domestic career, in 1993 Gough was poised with a decision that would shape his career. Lacking in height and stature, Gough certainly made up for it with his drive, determination and fierce competitiveness. Unsure whether to utilise his impressive swing bowling and sacrifice pace or to operate as a an out and out fast bowler, advice from a West Indian legend and Yorkshire team mate, Richie Richardson would be pivotal in Gough’s career. Opting to perform as an out and out fast bowler Gough took 5 wickets during that match and never looked back, Gough instantly comprehended that bowling fast and taking wickets was far more suited to his talents and personality and this newfound philosophy would ultimately shape the remainder of his career. During his work as a cricket speaker Gough shares how this choice defined his career as well as expanding upon his undeniable love and passion for fast bowling.

Making his England debut in 1994, playing in both Test Match and One Day International cricket, Gough instantly showed his potential with the ball along with scoring a well complied half century which immediately drew the attention of the British media who saw an aggressive England all-rounder and quickly drew comparison and dubbed him the "new Botham". A comparison to a true legend with an abundance of talent, Gough’s batting would not match the heights of those achieved by Botham however his bowling was somewhat revolutionary.

His prolonged and distinguished presence within the England team would see him become and integral part of the side both for his performances and infectious personality. A wonderful International career, Gough’s most memorable performances in Test cricket included the 23rd hat-trick in Test cricket which came against old rivals, Australia at the Sydney Cricket Ground in 1999. Gough will also forever be remembered for his exploits in 2000-01 where his contribution and influence led to him being named the Man of the Series against West Indies and Sri Lanka as he excelled and once against Pakistan, the traditional graveyard of fast bowlers. Notorious for its unresponsive pitches and excruciating heat, the subcontinent is without doubt the biggest challenge for bowlers around the world however Gough relished the challenge and was quite outstanding. His performances during that period are still spoken of to this day showcasing the magnitude of his accomplishments. Often spoken of during his work as a cricket speaker, Gough expresses the difficulties of fast bowling in Asia as well as sharing the secrets behind his success.

At the helm of the English fast bowling, Gough led the attack throughout the 90s and following a knee injury that agonisingly ended his Test career, Gough took 229 wickets in his 58 test matches, putting him ninth in the all-time wicket-takers list. Plagued by injury for large part of his career, Darren’s sheer will and determination to continually recover and retiring to playing is admirable. Focusing his efforts on the shorter form of the game, Darren Gough remains the benchmark for bowlers around the world in One Day International cricket and in particular for his exploits as a death bowler. The first Englishman to understand and utilise reverse-swing bowling, Gough is still regarded one of the best exponents of this fine art. A clear area of expertise, Gough spreads his wisdom on this crucial skill during his work as a cricket speaker.

A spectacular professional career, Gough took over 800 First Class wickets to go along with over 500 List A dismissals in addition to almost 500 International wickets. A truly illustrious and magnificent career, Gough’s exploits and prowess have propelled him to become one of the best bowlers to represent England. A true showman and entertainer, since his retirement Darren’s popularity once again grew thanks to his success appearing on BBC’s Strictly Come Dancing and being crowned King of the dance floor in 2005. The most famous venture outside of cricket, Darren Gough’s fruitful career on Television continued as he flourished on yet another BBC show, as team captain Hole in the wall.

Gough’s media success has equipped him with a skill set that transfers well into after dinner speaking and keynote speaking, something which he is being to prove popular for. Infamously asking not to be considered for an England tour to spend more time with his family, Gough had actually already signed up for Strictly Come Dancing much to the bemusement of the national selectors. A hilarious story, Darren recollects these serious of events during his work as a cricket speaker that is certain to provide huge entertainment for guests.

Known as the perfect professional throughout his career, he has acted as a role model for young cricket players throughout England; his coherent approach to event hosting and appearances follows the same meticulous and pedantic preparation as he applied to his cricketing career.

With life before cricket involving a stint as a footballer, Gough is well equipped to be a sports speaker at events as well as specialising within cricket speaking; his years spent competing as a professional throughout both of the sports permit him to deliver inspirational keynote and after dinner speeches which will motivate and stimulate the audience.

The former Yorkshire CCC captain, Gough had a tremendous ability to improve the teamwork and cohesion behind his team and inspire his teammates to bring the best out of them. Darren is also able to transfer these skills to his work as a cricket speaker allowing him to integrate and captivate the audience if required in an incredibly relatable manner.

A legend of England cricket whose popularity has arguably only grown his retirement, Gough’s abundance of knowledge and experience coupled with his expertise in cricket, implausible popularity and leadership capabilities to name a few make Gough a remarkable cricket speaker. A proud Yorkshireman, face of supermarket giant Costcutter and best man for England maverick, Kevin Pietersen, Darren Gough’s incredibly varied career and life provide him with a truly extended and vast amount of content to share as a cricket speaker. An English cricketing icon who played a huge part in transforming fast bowling, Darren Gough is available to hire as a cricket speaker for any event or function and is certain to be a fantastically entertaining addition to any cricketing engagement.

To book Legendary England Death Bowler, Darren Gough, as the cricket speaker for your corporate event, function or conference, simply contact the Champions Cricket Speakers agency by filling in our online contact form. Alternatively, call a booking agent directly on 0207 1010 553.