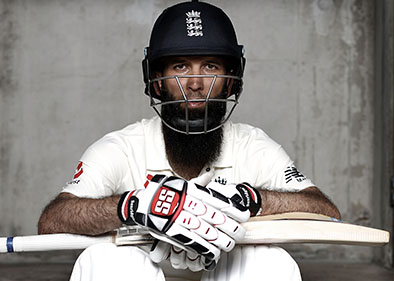 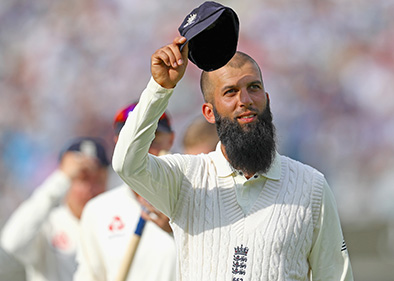 Moeen Ali is the current England spinner and batsman who plays domestically for Worcestershire CCC. A classy and explosive left-handed batsman, Ali is the England teams primary off break bowler and has been an indispensable member of the side in all three formats of the game. Fondly known as the ‘beard that’s feared’, Ali was named one of five Wisden Crcickter’s of the Year in 2015 and was recently bought in the coveted IPL Auction for the prestigious Royal Bangalore Challengers franchise. A vital member of the England team, Moeen Ali has become an incredibly sought after cricket speaker around the nation.

Ali began his career with Warwickshire CCC where he showed tremendous potential from a young age and went on to captain the England U19s to the semi-finals of the 2006 U19 World Cup in Pakistan, an impressive achievement given they had been hammered in their warm-up games by Bangladesh. Making an impressive start to his First Class career, Ali scored half centuries on both his First Class and County Championship debuts and also contributed with the ball. After beginning his career with rivals Warwickshire, Moeen moved across the boundary to New Road in 2007 and quickly established himself in the first team, scoring 77 on his County Championship debut for Worcestershire CCC.

Considered to have the ability and temperament to fill Worcestershire legend Graeme Hick’s boots, Moeen enjoyed a fine 2011 season, scoring 930 first-class runs and topping the club averages in 40-over cricket before a strong domestic campaign in 2013 which saw Ali 1,375 runs at an average of over 60 including 4 centuries in addition to almost 30 wickets saw him named the PCA MVP and PCA Player of the Year awards in addition to Moeen gaining England recognition in One Day International cricket. During his work as a cricket speaker Moeen discusses his childhood and how he got into cricket along with sharing unique insights into his decision to move counties.

After impressing in the shorter format of the game, Mooen was selected as a Test spinner for the series against Sri Lanka although it was his main suit that impressed as he hit a stunning rear-guard century in the second match. He did however shine with the ball in the subsequent home series versus India taking 19 wickets in the five Tests, including a match-winning 6-67 at the Ageas Bowl. This series was Ali’s defining moment as a Test spinner and during his performances as a cricket speaker he discusses the scrutiny and criticism he faced for his bowling at the start of his career compared to the satisfaction he felt following wonderful performances against India.

Scoring his maiden One Day International century in Sri Lanka in November 2014, Mooen followed it up with another hundred against Scotland in England’s disappointing World Cup campaign. Moeen missed the opening match of the West Indies series but otherwise played every Test for England in 2015 ending the year with a Man of the Match performance as Alastair Cook’s men kicked off the South Africa tour with a resounding win. Continuing to consistently contribute in all three facts of the game, Moeen Ali was one of only 4 players to receive full England central contracts, a testament to his performances and importance to English cricket and something he expresses his pride in during his work as a cricket speaker.

Having already scored five Test centuries and 3 ODI hundreds to go with four 5 wicket hauls, Moeen Ali is also a huge advocate and supporter of charities and an ambassador for StreetChance. Nominated for the Best at Sport award at the British Muslim Awards, Moeen Ali is an incredibly popular figure in English cricket and his endearing and welcoming nature make him a wonderful cricket speaker. England and Indian Premier League superstar, Moeen Ali is available to hire as a cricket speaker for any event or cricketing engagement.

When he’s at corporate events, Moeen is known to cover the following topics:

To book England All-Rounder, Moeen Ali, as the cricket speaker for your corporate event, function or conference, simply contact the Champions Cricket Speakers agency by filling in our online contact form. Alternatively, call a booking agent directly on 0207 1010 553.