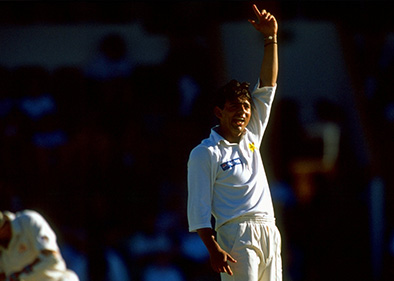 Saqlain Mushtaq is a former Pakistan cricketer who is widely regarded as one of the greatest spinners to play the game. The creator of the ‘doosra’, a leg break delivery bowled with an off break action, Saqlain enjoyed a truly prolific career as a player and won the hearts of fans around the world. One of the first mystery spinners in world cricket, Mushtaq has also worked extensively as the spin bowling coach for the England team where he was an incredibly popular member of the team as well as helping spin bowlers around the world, namely Pakistan spinner Saeed Ajmal. An incredibly intelligent and eloquent personality, Saqlain Mushtaq plays local club cricket in the Midland consistently leaving his teammates and the opposition in awe and star struck. The legendary off spinner also work extensively as a cricket speaker sharing a host of tales and anecdotes from his career along with passing on him tremendous wisdom.

With a First Class career that spanned over almost two decades Saqlain played for a number of teams in Pakistan as well as representing Surrey CCC and Sussex CCC in England. A prolific performer, Mushtaq ended his domestic career with over 1,250 wickets taking 5 wickets in a match on more than 60 occasions. During his work as a cricket speaker Mushtaq discusses his domestic career sharing his experiences playing in both Pakistan and in England.

Mushtaq is most certainly best known for his exploits in International cricket, a career filled with records and accolades Saqlain Mushtaq will forever go down as a legend of the game. Making his International debut in 1995, Mushtaq went on to play 49 Test Matches and 169 One Day Internationals for Pakistan and forever be etched in cricketing history. Mushtaq took almost 500 wickets in International cricket and also registered a Test century. With 13 5 wicket hauls and three 10 wicket hauls in Test Match cricket, Saqlain also registered seven five wickets hauls in ODIs. The Wisden Cricketer of the Year in 2000 was the fastest bowler to reach 100, 150, 200 and 250 wickets in One Day International cricket and was the first spinner to take a hat trick in ODI cricket and the second of only four bowlers to have taken two ODI hat tricks with the latter being only the second hat trick in a World Cup. Holding the record for the most wickets in a calendar year in ODIs, a statistical analysis conducted by Wisden in 2003 revealed Saqlain as the all-time greatest ODI spinner. An extraordinary career, during his work as a cricket speaker Mushtaq reminisces on his fabulous career sharing incredibly insightful and informative accounts from his playing days.

Following his career as a player Saqlain worked as the spin consultant for England as well as taking part in various coaching ventures around England while promoting the game to wider parts of the UK. Still playing in local league cricket, Saqlain has graced recreational cricket in London, Leicestershire and Birmingham and his appearances and ventures have only gone on to increase his popularity and demand as a cricket speaker.

A cricketing legend and Pakistani cricket icon, Saqlain Mushtaq has enjoyed a truly illustrious and decorated career in cricket and the abundance of knowledge and experiences he has allow him to captivate and mesmerise guests at events along with providing an extremely entertaining and hilarious aspect to events. Saqlain Mushtaq is available to hire as a cricket speaker for any event, function or occasion and is certain to be a fantastic addition.

When he’s at corporate events, Saqlain is known to cover the following topics:

To book Legendary Pakistan Bowler & Creator of 'The Doosra', Saqlain Mushtaq, as the cricket speaker for your corporate event, function or conference, simply contact the Champions Cricket Speakers agency by filling in our online contact form. Alternatively, call a booking agent directly on 0207 1010 553.