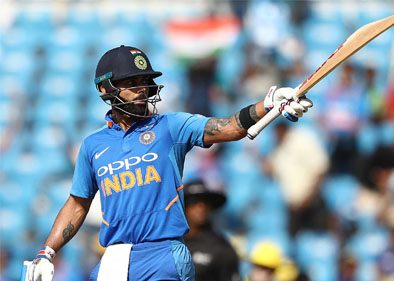 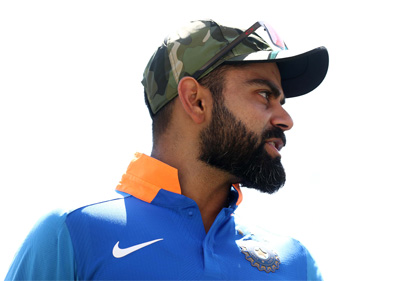 Virat Kohli is an Indian international cricketer who currently captains the India national team. A right-handed top-order batsman, Kohli is regarded as one of the best batsmen in the world. He plays for Royal Challengers Bangalore in the Indian Premier League and has been the team's captain since 2013.

Born and raised in Delhi, Kohli represented the city's cricket team at various age-group levels before making his first-class debut in 2006. He captained India Under-19s to victory at the 2008 Under-19 World Cup in Malaysia, and a few months later, made his ODI debut for India against Sri Lanka at the age of 19.

Initially having played as a reserve batsman in the Indian team, he soon established himself as a regular in the ODI middle-order and was part of the squad that won the 2011 World Cup. He made his Test debut in 2011 and shrugged off the tag of "ODI specialist" by 2013 with Test hundreds in Australia and South Africa. Having reached the number one spot in the ICC rankings for ODI batsmen for the first time in 2013, Kohli also found success in the Twenty20 format, winning the Man of the Tournament twice at the ICC World Twenty20. In 2014, he became the top-ranked T20I batsman in the ICC rankings, holding the position for three successive years until 2017. Since October 2017, he has been the top-ranked ODI batsman in the world and is currently the leading batsman in the Test rankings. Among Indian batsmen, Kohli has the best ever Test rating (937 points), ODI rating (911 points) and T20I rating (897 points).

Kohli was appointed the vice-captain of the ODI team in 2012 and handed over the Test captaincy following Mahendra Singh Dhoni's Test retirement in 2014. In early 2017, he became the limited-overs captain as well after Dhoni stepped down from the position. In ODIs, Kohli holds the world record for the fastest batsman to 10,000 runs in 205 innings. Kohli has the second highest number of centuries and the highest number of centuries in run-chases in the world. Kohli holds numerous Indian batting records including the fastest ODI century, the fastest batsman to 5,000 ODI runs and the fastest to 10 ODI centuries. Among the T20I world records held by Kohli are: the fastest batsman to 2,000 runs, most runs in a calendar year and most fifties in the format. He also holds the records of most runs in a single tournament of both the World Twenty20 and the IPL. He currently holds the record of hitting most fours (223) in T20I with Tillakaratne Dilshan. He is the only batsman in history to average over 50 in Tests, ODIs and T20I simultaneously. On 27 October 2018, he became the first batsman for India, and tenth overall, to score three successive centuries in ODIs. In December 2018, Kohli became the first Asian captain to win a test match in England, Australia and South Africa.

Kohli has been the recipient of many awards such as the Sir Garfield Sobers Trophy (ICC Cricketer of the Year) in 2017 and 2018; ICCTest Player of the Year 2018; ICC ODI Player of the Year in 2012, 2017 and 2018 and Wisden Leading Cricketer in the World in 2016, 2017. He was given the Arjuna Award in 2013, the Padma Shri under the sports category in 2017 and the Rajiv Gandhi Khel Ratna, the highest sporting honour in India, in 2018. Alongside his cricket career, Kohli co-owns FC Goa in the ISL, the IPTL franchise UAE Royals and the PWL team Bengaluru Yodhas. He also has other business ventures and over 20 brand endorsements. Kohli is ranked as one of the world's most famous athletes by ESPN and one of the most valuable athlete brands by Forbes. In 2018, Time magazine named Kohli one of the 100 most influential people in the world.

When he’s at corporate events, Virat is known to cover the following topics:

To book Indian international cricketer, Virat Kohli, as the cricket speaker for your corporate event, function or conference, simply contact the Champions Cricket Speakers agency by filling in our online contact form. Alternatively, call a booking agent directly on 0207 1010 553.