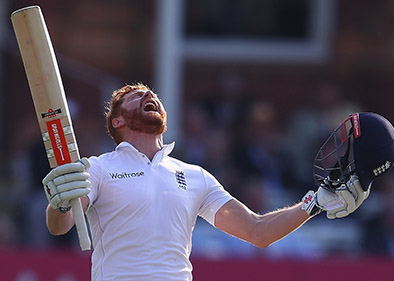 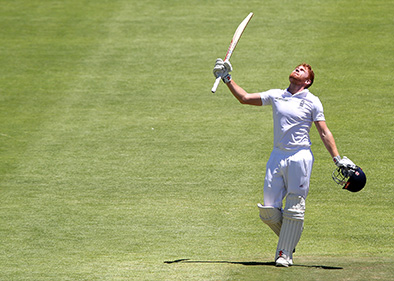 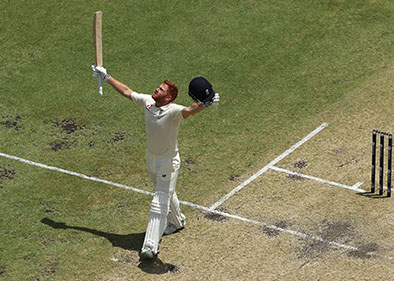 Son of the legendary cricket speaker and former England wicketkeeper David Bairstow, Jonny Bairstow is most certainly following in the footsteps of his father. A talented player who has become an indispensable member of England team, Bairstow has become one of the first names on the team sheet in all formats of cricket and has received widespread adulation and praise for his abilities being heralded as the best wicketkeeper batsman in world cricket. An enigmatic and exhilarating batsman, Bairstow has a devastating ability to obliterate opposition bowlers through his expansive stroke play. A polished and assured wicketkeeper, Jonny Bairstow is also an incredibly sought after and popular cricket speaker working extensively at after dinner speaker events across the country.

Showing talent in a variety of sports as a child, Jonny Bairstow joined Yorkshire’s Under-15 and was named the Wisden Schoolboy Cricketer of the Year aged seventeen and the child prodigy was destined for great things. Representing the Yorkshire Second XI and Academy side, Bairstow also received International recognition at young age playing for the England’s Under 17/19 teams. Jonny was awarded a professional contract aged 19 after continually impressing and showcasing his undeniable potential in both junior England and Yorkshire representative cricket. During his work as a cricket speaker Bairstow discusses his youth development and journey into cricket citing the various sacrifices he was required to make in order to fulfil his dreams.

Jonny made his First Class debut in June 2009 and instantly captured the hearts and imagination of the spectators during Yorkshire’s second innings against Somerset CCC scoring a blistering 82 not out before taking the gloves and contributing with 4 spectacular catches. This impressive performance secured Jonny Bairstow’s place in the First XI for the team as well as earning him enough recognition from England’s Performance Programme to garner a place in the England Lions. Now working as a cricket speaker Bairstow discusses his experiences of being a part of the Lions successful tour of the Caribbean where he showed off his strong right hand bowl and combative wicket keeping skills.

Establishing himself as Yorkshire CCC’s first choice wicket keeper, Jonny registered his first century with the team in May of 2011 and the incredibly popular player and cricket speaker amongst domestic fans went on to break club records as he turned his maiden century into a double hundred. Consistently averaging over 40 for a number of seasons, he was the only Yorkshire CCC batsman to score over 1000 runs in the season and on the back of his strong performances was called up to the England’s One Day International squad at the end of the season. During his work as a cricket speaker Bairstow discusses the joy and delight he felt following his call up along with expressing his desire for the future.

Jonny Bairstow found himself becoming more and more popular on the International circuit and was frequently called upon to appear in the England a team. Now working as a cricket speaker and player around the world Bairstow found he was unable to fully dedicate himself to the commitments of his domestic team. Despite such potential setbacks Bairstow played admirably at each appearance for Yorkshire, hitting his second biggest first-class score in a game against Leicestershire in 2015 as well as a match-winning 68 not out against Sussex in the same season. An incredibly proud Yorkshireman, as a cricket speaker Jonny discusses his affinity for the club and its supporters as well sharing how much he cherishes the club his late father played for.

Beginning the 2016 season with the same impressive level of success, Jonny Bairstow struck a marvellous 200 off just 163 balls in one of the first test matches of the year against South Africa. A blistering innings, Bairstow continued this rich vein of form to record a truly remarkable and record breaking year, setting a record for the most dismissals by a wicketkeeper in a calendar year, Bairstow also set a record for most runs in Test matches by a wicket-keeper in a single year. His total of 1,470 runs in Tests in the year meant he almost doubled the previous record of 777 for England wicket-keepers set by Matt Prior in 2012 and comprehensively surpassed the former record for any Test country of 1,045 runs, held by former Zimbabwe wicket-keeper and cricket speaker Andy Flower. These performances propelled Bairstow to be widely regarded as one of England’s greatest ever wicket keeper batsman and drew comparison to legends of the game. During his work as a cricket speaker Bairstow discusses the fundamentals that allowed him to enjoy just a spectacular year.

Having already scored almost 10 International hundreds and becoming a fundamental component of English cricket, Bairstow is certain to build on his thoroughly impressive start in International cricket as he takes on new responsibility at the top of England’s One Day order and earns the increased responsibility with comes with the No.6 position in Test matches. With a future that promises to be filled with further sporting success and popularity as a cricket speaker and player on both a domestic and International level Jonny Bairstow is an ideal choice of after dinner speaker for any cricketing event. The current England wicketkeeper who is said by many to be the best cricketing all-rounder in the world and certainly the best wicket keeper batsman, Jonny Bairstow is available to hire as a cricket speaker for any event, dinner or function and is certain to be the idyllic addition to any occasion.

When he’s at corporate events, Jonny is known to cover the following topics:

To book England Wicketkeeper Batsman, Jonny Bairstow, as the cricket speaker for your corporate event, function or conference, simply contact the Champions Cricket Speakers agency by filling in our online contact form. Alternatively, call a booking agent directly on 0207 1010 553.