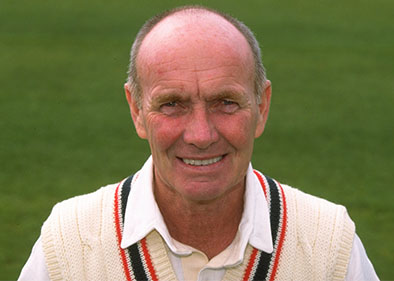 Jack Birkenshaw MBE is a former cricketer, umpire and coach who currently works extensively as scout and cricket speaker around the nation. Birkenshaw’s diverse career within the game has allowed him to compile a host of information and expertise from various facets allowing him to be an incredibly well informed and sought after cricket speaker. A widely cherished and respected cricketing personality, there is possibly no greater testament to Jack’s exploits in the game than those of commentator Colin Bateman, who stated "Jack Birkenshaw was the epitome of a good all-round county cricketer: a probing off-spinner who used flight and guile, a handy batsman who could grind it out or go for the slog, a dependable fielder and great competitor".

Beginning his career with Yorkshire CCC in his late teenage years, Jack Birkenshaw MBE immediately took to First Class cricket and made his debut in 1958, he however left Yorkshire CCC in exchange for a move to Leicestershire CCC in 1961. Following a few disappointing seasons playing solely as a batsman, Birkenshaw went on to make the history books as one of the few players to take part in the first ever Midlands Knock-Out Cup limited-overs tournament in 1962. During his work as a cricket speaker Birkenshaw discusses the infancy of his career along with the decisioss behind his reason to leave Headingley.

Gaining his first cap for Leicestershire CCC in 1965, Jack Birkenshaw MBE remained with the club for a further fifteen years and left the club as a legend. Whilst at Leicestershire, Birkenshaw drew the attention of the English cricket team selection committee and in 1971 he was selected to replace fellow cricket speaker Ray Illingworth as the team’s off-spinner for their Test matches in India and Pakistan. Jack Birkenshaw MBE went on to play in five Test matches for England and continues to contribute as a cricket speaker at a number of Test match events.

In what was a truly sensational domestic career in particularly for Leicestershire CCC, in 1967 Jack took over 100 wickets including five 5 wicket hauls leading to England selection followed by another 100 wicket season the year after before an impressive season with the bat highlighting his spectacular all round abilities. In between 1969 and 1972 Birkenshaw took a staggering 311 wickets which contributed to the 1,073 wickets he took during an illustrious First Class career along with over 12,500 runs. An illustrious playing career, during his work Jack reminisces on his glorious playing career and the key ingredients that led to such longstanding successes.

Upon retirement Birkenshaw spent six years as an umpire, covering two Test Matches and six One Day International games, four of which took place during the 1983 World Cup. In his capacity as a cricket speaker Jack Birkenshaw MBE regales audiences with tales of his time as both a player and umpire sharing in both the highs and lows of his domestic and international career.

Birkenshaw made his final appearance as an umpire in 1988 and has since gone on to work as a sports speaker and coach at his old domestic team, Leicestershire CCC followed by more recent appointments as spin coaching and scouting roles for the England & Wales Cricket Board where he is tasked with identifying and producing England’s spin bowlers of the future. Birkenshaw shares the qualities he looks for in young cricketers considering both their ability and their attitude towards the game, a vital role that will certainly shape the future of English cricket, Birkenshaw’s insight as a cricket speaker is incredibly insightful and inspiring.

A revered and cherished cricketing personality who has experienced the game from a number of different roles and positions, Birkenshaw’s journey within the game has allowed him to compile a host of interesting and entertaining tales and anecdotes that he eloquently shares with guests during his work as a cricket speaker. A legend of Leicestershire CCC, Jack Birkenshaw MBE is available to hire as a cricket speaker for any event, dinner or function and he will certainly be a magnificent addition to any occasion.

When he’s at corporate events, Jack is known to cover the following topics: