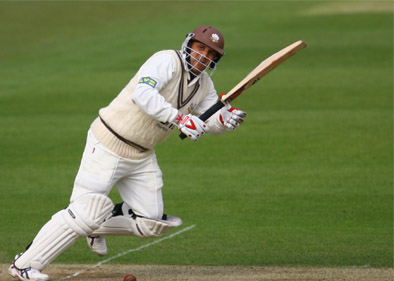 Mark Alan Butcher is a retired English Test cricketer, who played county cricket for Surrey from 1992 until his retirement from the sport in 2009. He was a left-handed batsman and occasional right-arm medium pace bowler.

Butcher played all his county cricket for Surrey, for whom he made his first-class debut in 1992. He made his Test match debut in the first Test of the 1997 Ashes series at Edgbaston. His last Test match was in December 2004, when he had played 71 Tests, making eight centuries and averaging over 34.

Butcher captained England once, in a draw with New Zealand in 1999 when Nasser Hussain was injured. He never appeared in a One Day International. Of players who have started in international cricket since the first ODI in 1970–71, Butcher is the "runaway leader" in terms of playing the most Test matches without appearing in an ODI. Butcher played in 71 Tests, but as of April 2004, no other player in the ODI era had played in more than 30 Tests without playing in an ODI.

Butcher enjoyed a reasonably good start to his Test career, hitting two half-centuries in five matches against a powerful Australian side. He then struggled, along with the rest of the England side, against the West Indies that winter, averaging just 15. However, in the next series, he did very well, scoring two fifties and a century against the South African side. Though he followed that with another impressive hundred against Australia in the first Ashes Test that winter, he then failed for the rest of that series. A poor run of form followed as he failed to score a half-century in twelve consecutive matches. Despite being appointed stand-in captain for one Test against New Zealand, he was dropped from the side in the winter of 2000.

Butcher's domestic form then suffered an uncharacteristic and dramatic decline, and he found himself languishing in the Surrey second eleven at the start of the 2001 English domestic season. However, hard work and coaching from his father, Alan, himself a former Surrey and England player, sorted out his form. He was drafted into the Test side to play the Australians and strong showings throughout that series culminated in a superb inning of 173 not out at Headingley, as England successfully chased 315 to win (although the series was by then lost).

After that series, Butcher continued to prosper until a run of injuries saw him lose his place. Consistent performances had made him an essential component of the England batting line-up, to be relied upon in a crisis. Nowhere was this more apparent than in the series in the West Indies in 2003-4, when he always batted well irrespective of the sometimes poor showing by various partners at the other end, and he passed fifty in four out of seven innings. A series of serious injuries kept Butcher out of the game for most of 2005, and his last Test was the first Test in South Africa in December 2004.

Thereafter, he struggled to recover properly from numerous injury setbacks, and although he retained the official captaincy of Surrey his appearances for the team became sporadic. In August 2009, Butcher announced his retirement from all first-class cricket after a troubling knee injury.

Since his retirement as a player, he has commentated on cricket for Sky Sports and has appeared as an expert summariser on Test Match Special.

He was awarded Honorary Life Membership of Marylebone Cricket Club in January 2010.

When he’s at corporate events, Mark is known to cover the following topics:

To book Former England Test Cricketer, Mark Butcher, as the cricket speaker for your corporate event, function or conference, simply contact the Champions Cricket Speakers agency by filling in our online contact form. Alternatively, call a booking agent directly on 0207 1010 553.