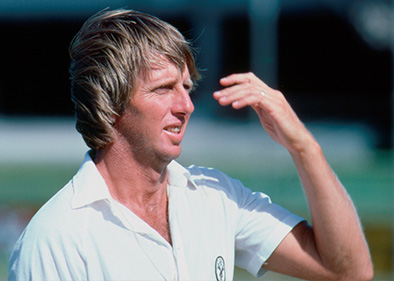 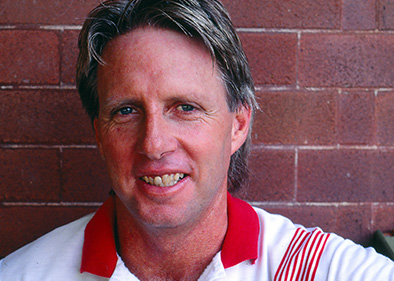 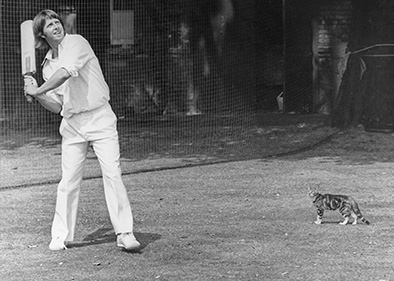 One of the Fastest Bowlers of All Time

Legendary Australian fast bowler Jeff Thomson is a former International cricket who is widely regarded as the ‘fastest bowler of all time.’ Fondly known as ‘Thomo’, Jeff is remembered for the unforgettable partnership and relationship he formed with fellow fast bowler and cricket speaker, Dennis Lillee. A devastating fast bowler who struck fear into batsman around the world, Thomson was the first bowler to break the 100mph barrier and has since his retirement become a highly influential and popular cricket speaker around the world.

Thomson made a blistering start to his career, making his First Class debut in 1972, Thomson took 17 wickets in his first five games and was a surprising selection in the Australia Test team. Selected to represent his country after just 5 matches, Thomson was eager to impress however his performance did not match his ambitions and it was later disclosed that he played with a broken foot concealing the injury from selectors and playing through the pain in order to play. Consequently Thomson was left out of the West Indies tour and during his work as a cricket speaker discusses the dramatic start to his career along with the pain he endured to take his chance in the Test arena.

Bursting into Test Match once again in 1974, going into the 1974-75 Ashes Series the England team had only seen Jeff’s unique style of bowling once before when he was under instruction to bowl within himself. That series would be a career defining time for Thomson, in an interview before the game Jeff controversially said "I enjoy hitting a batsman more than getting him out. I like to see blood on the pitch". This he most certainly did, a match winning spell of 6 for 46 proceeded another ferocious spell of fast bowling at Perth where he took 5 for 93 in the second innings to again lead Australia to victory and injury many England batsman in the process. Taking 33 wickets in the series, Thomson fondly reminisces on his first Ashes Series along with the stardom that followed his fast bowling exploits.

From this series onwards Thomson continued to remain a revered and feared fast bowler around the world continually producing outstanding perfroamnces and spearheading the Australia attack along side his compatriot Dennis Lillee. With Lillee by his side Jeff Thomson was part of the most fearsome combination in Test cricket history causing Wisden to comment that: “… it was easy to believe they were the fastest pair ever to have coincided in a cricket team”. Thomson and Lillee played Test cricket throughout the 70’s and 80’s competing in more than fifty matches, until Thomson’s retirement in 1986 whereby he became a dedicated cricket speaker.

Playing for the Queensland and New South Wales domestic teams Thomson spent a brief period as a cricket speaker for Middlesex CCC in England although he was known across the cricketing world for his work in Test cricket, particularly for the success of the 1974-75 season when Australia won the Ashes series. During his work as a cricket speaker Thomson discusses his time in domestic cricket along with his extensive and illustrious career in Test matches.

Having signed to play in the World Series Cricket with Kerry Packer, Thomson eventually attempted to opt out due to conflicting contracts made by his manager which led to controversy that he discusses during his work as a cricket speaker. Later in his domestic career Jeff Thomson was chosen as the captain and leading sports speaker for the Queensland team, whom he led to victory in a number of matches across the globe.

In 1979, Thomson won a fastest bowling competition held by the Australian television station Channel 9, in a year in which he was banned from playing professional cricket. His maximum speed was timed at 147.9 km/h using the same method as employed during the 1975 study at the WACA. Often scrutinised for his inconsistent and at time erratic bowling, Thomson also finished first for accuracy in the competition. A tenacious competitor, Jeff Thomson represented Australia in over 100 matches and went on to take over 250 wickets in International career. As a cricket speaker Thomson recollects on his fine career and discloses the key components that led to him becoming such a memorable and devastating fast bowler.

Now retired Jeff Thomson works as a cricket speaker in both Britain and Australia and is known for his sharp, witty, tongue and the wealth of entertaining stories he has to share about his time as a player. Inducted into the Australian Cricket Hall of Fame in 2016, Thomson epitomises the label of legend and will forever be cherished in the cricketing world. A unique style where he ambled to the crease before launching the ball at extreme speeds through his instantly recognisable sling, Thomson’s career in javelin throwing was to thank for this style. A cricketing legend and icon, Jeff Thomson is available to hire as a cricket speaker for a host of events and functions.

When he’s at corporate events, Jeff is known to cover the following topics:

To book Legendary Australian Fast Bowler, Jeff Thomson, as the cricket speaker for your corporate event, function or conference, simply contact the Champions Cricket Speakers agency by filling in our online contact form. Alternatively, call a booking agent directly on 0207 1010 553.