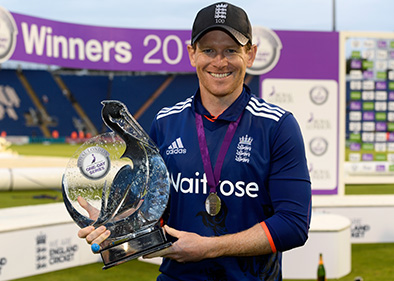 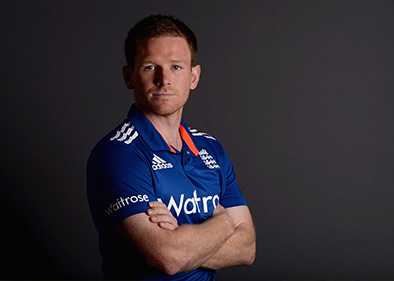 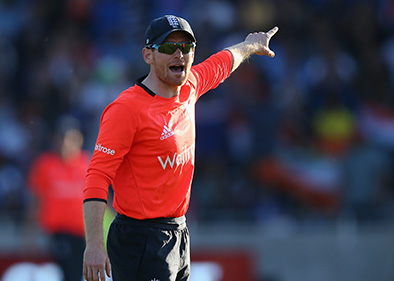 Eoin Morgan is the current limited overs England captain and is one of few players to have represented two nations. Morgan became the first of only two players in history to score a One Day International hundred for two countries and was appointed as the England captain in 2015 and has since become the only England ODI captain to have scored more than 4 centuries. Having played for Middlesex CCC for over a decade, Morgan is renowned for his powerful and dynamic stroke play and is in partially effective at the end of the innings earning him the nickname ‘the finisher’. A tremendous exponent of the reverse sweep, Eoin Morgan has played in lucrative Twenty20 tournaments around the world and is regarded as one of the most dangerous batsman in the game. Alongside his playing and captaincy commitments Morgan has become a prominent cricket speaker and appears at a host of events across the nation.

Impressing while playing for Ireland U19’s, Morgan was Ireland’s leading scorer in the 2004 Under 19 Cricket World Cup captained Ireland in the 2006 Under 19 World Cup where he finished as the second-highest overall run-scorer in the tournament. The leading run scorer in U19 Cricket World Cup history, Morgan scored his maiden First Class hundred in tour match against South Africa in 2008 and later that same year went on to be a crucial and integral member of the Middlesex CCC team that won the 2008 Twenty20 Cup. Morgan showcased tremendous leadership and maturity at a young age and was rewarded with the Middlesex captaincy in the absence of Shaun Udal. Continuing to be an incredibly important member of the London club, as a cricket speaker Morgan shares details about the beginning of his career and the success he enjoyed with Ireland along with the gratitude and affinity he has for Middlesex.

Morgan made his One Day International debut for Ireland at the 2006 European Championships against Scotland and he immediately made an impact at International level although he agonisingly fell one run short of a century, scoring 99 and this became the first time in ODI history that a player had been dismissed for 99 on debut. A maiden ODI hundred came shortly after and in 2009 Morgan became the first cricketer to score a First Class double hundred for Ireland with an unbeaten 209 against the United Arab Emirates before representing his nation at the 2007 World Cup. Having opening shared his desire to play for England from an incredibly young age, Morgan began his pursuit to play for England following the World Cup. As a cricket speaker Morgan discusses his achievements for Ireland and explains his reasons for wanting to play for England however he still remains incredibly fond of Irish cricket and a huge advocate of its growing popularity and stature.

Morgan was instantly successful playing for the England Lions and continued to do well for Middlesex CCC before eventually making his England debut in 2009. Morgan’s innovative style gained praise early into his England career as he became somewhat of a catalyst in England’s middle order. Shining against Australia and during the 2009 Champions Trophy Morgan cemented his place in the England limited overs team. An important member of the England team that won the 2010 ICC World T20 World Cup, in 2011 Morgan sacrificed domestic cricket and a potential to secure a Test call up to play in the prestigious Indian Premier League. As a cricket speaker Morgan discusses his first experience of the IPL and what it is like to be involved in such a high profile competition.

Making his Test debut in 2011, Morgan has played 16 Test matches for England and scored 2 centuries however limited overs cricket has been his forte and he has consistently been a member of the England One Day and T20 teams ever since his debut. Receiving increasing responsibility within the team, Morgan was named the England captain ahead of the 2015 World Cup and continues to flourish in the role to this day. Having already made over 200 limited overs appearances for England and scored more than 10 hundreds, Morgan has lead from the front and established himself as one of the most impressive and effective batsman in the world.

A dynamic and dangerous batsman able to singlehandedly win matches and obliterate opposition bowlers, Eoin has developed a magnificent reputation as a finisher and is in particularly effective against spin bowling and is a specialist at the end of an innings. Morgan’s prowess in the shortest format of the game has led to him playing in the Indian Premier League, Big Bash, Caribbean Premier League and Pakistan Super League and these experiences and the host of entertaining tales and anecdotes that he has compiled during these expeditions make for fascinating and insightful content during his work as a cricket speaker.

A phenomenal and special talent that is also an incredibly impressive and composed personality, the current England limited overs captain is a fantastic batsman that many consider to be one of the most destructive batsman in the world. A true gentleman and eloquent cricket speaker, Eoin Morgan is available to hire for any event or function and is certain to provide an incredibly insightful and captivating performance at occasion where he is working as a cricket speaker.

When he’s at corporate events, Eoin is known to cover the following topics:

To book England Limited Overs Captain, Eoin Morgan, as the cricket speaker for your corporate event, function or conference, simply contact the Champions Cricket Speakers agency by filling in our online contact form. Alternatively, call a booking agent directly on 0207 1010 553.