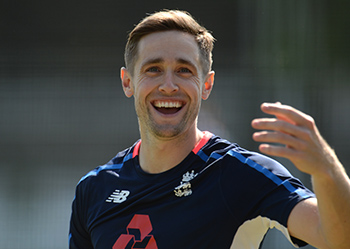 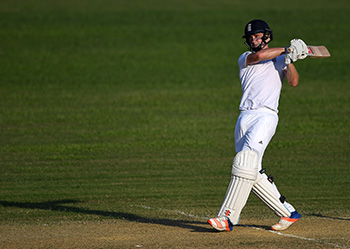 Chris Woakes is an immensely talented all-rounder who is an integral part of the current England team. A right-handed batsman and a right-arm fast-medium pace bowler, Woakes has regularly player a crucial role in England’s victories and successes. Earning International recognition at the tender age of 21, in the 2017 IPL Auction Woakes was bought for over half a million pounds by the Kolkata Knight Riders. An incredibly respectful and endearing personality, Chris Woakes has become a very popular cricket speaker on the after dinner speaker circuit.

Progressing through the Warwickshire CCC pathway, Woakes’ first taste of First Class Cricket came in 2006 in a match against West Indies A. Despite impressing on his debut, Woakes was made to wait until the final part of the 2007 season to represent the team again. Announcing himself on the First Class stage in 2008, Woakes took 42 wickets an average of 20.57 and in doing so became Warwickshire CCC’s leading wicket taker that year. Woakes’ consistently impressive performances earnt him a place in the England Performance Programme squad to tour Australia over the winter. During his work as a cricket speaker, Chris Woakes discusses his breakthrough year and his first taste of International recognition.

Soon after his spectacular season, Chris Woakes received his first senior England call-up in a limited-overs series that followed the Ashes, hitting the winning runs on debut before going on to take 6 wickets in his just his second One Day International. Having agonisingly missed out on the 2011 World Cup, Woakes continued to impress that season making crucial contributions to Warwickshire CCC challenge for the LV County Championship Division One title taking 56 wickets to go along with the vital 579 runs he scored.

An injury prematurely ended his limited-overs tour of India and saw him miss out on the subsequent winter squads announced in late 2011. This was the first real test of Woakes’ career and during his work as a cricketer he shares the tremendous will and resilience that was needed to recover from this setback.

Upon his return to fitness, Chris once again played a vital role for his The Bears in 2012, a significant contribution scoring over 500 runs at an average of more than 70, Woakes was a fundamental component in his side being crowned as County Championship champions.

Following his domestic successes, Woakes went on to represent England against South Africa and India before continuing his journey in International cricket. A much anicpiated moment fillowed during the 2013 Ashes Series when Woakes made his Test Match debut following an injury to Tim Bresnan. Initially struggling to find the same level of consistency that he enjoyed in domestic cricket, Woakes made his mark during the 2014 tour of India & Sri Lanka where he was considered as the stand out performer.

Allowed to represent his county at the NatWest T20 Blast Finals Day, Woakes led his time to the coveted NatWest T20 Blast Trophy after holding his nerve in the final over against England legend, Andrew Flintoff to win the title on home soil. Woakes reminisces on this magnificent day during his work as a cricket speaker sharing his delight at contributing to his home counties success.

Selected in the 2015 World Cup squad following further impressive performances during the successful Tri-Series victory against Australia, Woakes began to truly fulfil his potential in 2016, scoring a ODI career best 95 in the first One Day International against Sri Lank which was also the highest score by number eight or lower in One Day International history and was named Man of the Match as a result. He continued to build upon his success and transferred his performances into Test cricket taking 11 wickets in the first Test against Pakistan followed by a half century in the second Test. Making vital contributions to every game during that series, Woakes truly established himself as an important member of the England team and garnered huge praise for his performances.

Continuing to be a vital figure in the England team, Woakes is often one of the first names on the team sheet largely due to his wonderful all round ability that allows him to contribute in all three facets of the game across all 3 formats. Constantly improving as a player, Woakes was bought by Royal Challengers Bangalore for the 2018 Indian Premier League and has also experienced domestic cricket abroad playing in Australia for Sydney Thunder and in New Zealand for Wellington.

An extremely likeable personality who exudes charisma, Chris Woakes is quickly becoming a world class cricketer and is consistently playing at the highest level. Able to provide a unique insight into International cricket and lucrative global tournaments, Woakes’ experiences allow him to inspire and educate guests across the nation at all manner of cricket events. A wonderful talent, Chris Woakes is available to hire as a cricket speaker for any event, presentation evening or dinner and is certain to be a fantastic addition and deliver an unforgettable event.

To book England All-Rounder, Chris Woakes, as the cricket speaker for your corporate event, function or conference, simply contact the Champions Cricket Speakers agency by filling in our online contact form. Alternatively, call a booking agent directly on 0207 1010 553.