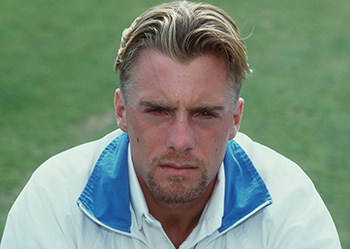 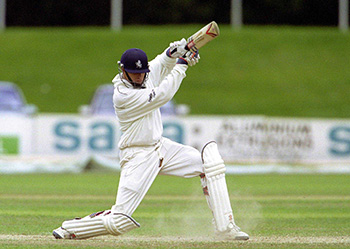 David Fulton is a former cricketer that now works as a prominent journalist and pundit namely for Sky Sports. A career that spanned over a decade playing for Kent CCC, Fulton was a right handed batsman that compiled over 12,000 First Class runs during his 15 year career at the county. During his impressive career David also captained Kent CCC and was praised by former Australian Captain, Steve Waugh for his tactical and leadership prowess and stated Fulton could be ‘a future England Captain’. Having garnered an abundance of knowledge and experience from his time in the game, David Fulton’s work in the media and as a cricket pundit has further developed his popularity and demand on the after dinner speaker circuit where he works as a cricket speaker across the nation.

Beginning his time at Kent CCC in 1992, Fulton went on to establish himself as a regular member of the county’s 1st XI and performed consistently for a number of seasons before scoring a magnificent 958 runs in 1998 including his first double century. An innings of incredible substance, Fulton’s 207 not out in a match saving cause spanned over a quite incredible 10 and a half hours showcasing his extraordinary ability to concentrate for a prolonged period of time and the skills of focus, concentration and determination are shared during his performances as a cricket speaker. Receiving criticism for the innings despite compiling a double hundred, David expresses his views on Clive Ellis of The Daily Telegraph’s comments that suggested Fulton’s knock prevented any chance of victory for his side.

Fulton enjoyed a purple patch in his career in 2001 where he had an extraordinarily successful year that saw him score 1892 runs, at an average of 75.68, a staggering achievement that he reminisces upon during his work as a cricket speaker. Fulton’s stellar year resulted in International recognition and according to Nasser Hussain, Fulton was originally selected in place of fellow cricket speaker Mark Butcher for the fourth Test against Australia before England selectors had a change of heart and reinstated Butcher. During his work as a cricket speaker David expresses his disappointment at missing out on a chance to play International cricket despite being the leading batsman in the country that year during a year in which he was named the PCA Player of the Year.

Named as the Kent CCC First Class captain for 2002, Fulton relished the added responsibility and registered his second successive 1,000 run plus season finishing the year with 1,358 runs to his name and receiving incredibly kind and powerful praise from Australian legend, Steve Waugh which he shares during his work as a cricket speaker. Sustaining an awful injury in preparation for the 2003 season during practice, Fulton was batting against the bowling machine when he was agonisingly struck by a ball in the eye that ruled him out of the first two months of the season and hampered his ability forever after. Discussing this terrible incident during his performances as a cricket speaker David recollects the horrible accident that played a large part in the demise and end of his career.

Returning after the traumatic experience, Fulton remarkably scored 600 runs in just 11 matches showcasing his incredible ability to deal with adversity and continued to consistently perform for the next few seasons while attempting to lead his team in a challenge for the County Championship title. Remembered for his decision to strike a deal with Nottinghamshire CCC captain Stephen Fleming that saw David agree to chase 420 from 70 overs, Kent unsurprising fell well short of the target and accumulated half the runs. Fulton’s deal was met with vast criticism and scrutiny described by Hampshire CCC captain, Shane Warne as "one of the dumbest things I have ever seen." Fulton stepped down from captaincy a week later and recollects this infamous agreement during his work as a cricket speaker and his hilarious account and version of events is not to be missed!

Awarded a benefit year in 2006, Fulton enjoyed an incredibly successful and fruitful campaign, a testament to his popularity amongst Kent fans and ended his career that year scoring 155 in his final First Class innings to ensure a fitting end to his impressive career. Following his retirement Fulton has become an incredibly respected and prominent member of the Sky Sports team and often shares his expert advice and presents numerous cricket shows and matches around the world. An incredibly popular TV and media personality, Fulton is now instantly recognisable as a result of his escapades on Sky Sports and his insight and knowledge has led to him becoming cherished and respected amongst viewers and supporters across the nation. A former captain and player who is a wonderful pundit, David Fulton is available to hire as a cricket speaker for any event, function or dinner.

To book Former Kent Captain & Pundit, David Fulton, as the cricket speaker for your corporate event, function or conference, simply contact the Champions Cricket Speakers agency by filling in our online contact form. Alternatively, call a booking agent directly on 0207 1010 553.