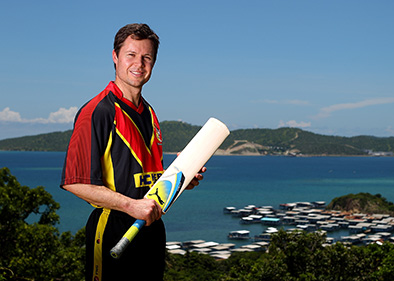 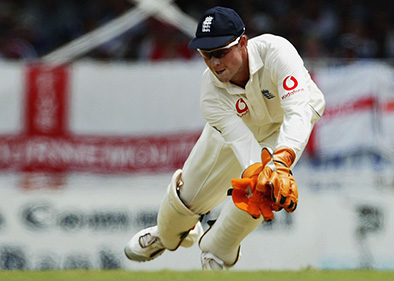 Geraint Jones MBE is a Papua New Guinean-born wicket keeper who was raised in Australia and of Welsh descent, spending time playing for both the England and Papua New Guinean national teams, Geraint Jones is one of the most celebrated cricketers of recent years. Best known for the crucial role he played in the unforgettable and historic 2005 Ashes victory, Jones is a prolific cricket speaker that is available to hire for sporting, corporate and charity after dinner speaker events across the nation.

Jones made his Test cricket debut in 2004 and spent the next two years as the first choice wicket keeper for England in both Test and One Day International matches. An integral part of the England team who made history by regaining The Ashes in 2005, that series is undeniably the highlight of Geraint’s career. Possibly the finest individual moment of his Test Career was taking the critical and spectacular catch of Michael Kasprowicz off the bowling of Steve Harmison which won the Edgbaston Test in the 2005 Ashes Series by just two runs. A fine wicketkeeper, Jones also displayed his batting capabilities at International level when during the same series he played a major role in the Trent Bridge test by supporting fellow cricket speaker Andrew Flintoff to help him reach his century whilst making a fantastic 85 himself. A memory and series that will forever live with Jones and one he will forever be remembered and cherished for during his work as a cricket speaker Geraint reminisces on the unforgettable series and achievement that captivated and galvanised the nation and forever changed the perception of English cricket.

Also boasting an incredibly successful and distinguished domestic career, Geraint Jones has worked as a cricket speaker and player for Gloucestershire CCC and Kent CCC. Spending over a decade with Kent, in 2015 Geraint Jones joined Gloucestershire CCC after a period on loan and acting as the captain enjoyed a fairy-tale ending to his playing career as Gloucestershire won the One Day cup at the Lord’s Cricket Ground in a thrilling final against Surrey CCC in what was Jones’ final game. The most special ending to fantastic career, Jones looks back on his time in county cricket sharing both his experiences and teachings with guests while reminiscing on that truly wonderful day at Lord’s.

A former Papua New Guinea International, Jones represented the nation in One Day International matches and ICC World Cup qualifiers. A record holder for the most Test innings without scoring a duck, Jones’ 52 innings streak was broken in his final Test where he was dismissed for a duck in both innings of the match and registered a pair, something he can now laugh about and discuss during his work as a cricket speaker.

Now based in the Essex and the Head of Cricket at Brentwood School, Geraint Jones works as an after dinner speaker in both England and Wales, appearing at sporting and educational events as well as corporate and charity fundraising functions. A truly charming and endearing personality, the 2005 Ashes hero Geraint Jones MBE is available to hire as a cricket speaker for any event, function or cricketing engagement and is certain to be a fantastic addition to any event.

When he’s at corporate events, Geraint is known to cover the following topics: