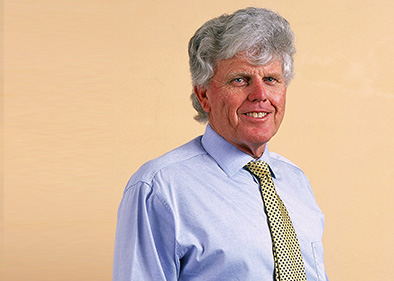 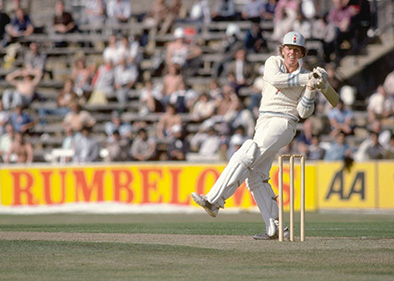 Barry Richards is a former South-African First Class cricket player and sports speaker who enjoyed an incredibly prosperous professional career spanning over three decades. Since his retirement, Richards has worked extensively as a television broadcaster, commentator and cricket analyst alongside his engagements as a cricket speaker. A remarkably successful yet brief Test career, Barry Richards remains one of the most recognisable faces and cherished personalities of his generation. Widely regarded as the ‘one of the finest talents of the 20th century,’ Barry Richards is an incredibly sought after cricket speaker.

Richards’ inability to maximise his potential was largely no fault of his own as a political battle put a restraint on South Africa’s ability to play International cricket. Scoring a century for the South African Schoolboys side against the Western Province First Class team, Barry’s ability was obvious and once again reconfirmed in 1966/67 when he scored a blistering 107 in just 160 minutes against the touring Australian national side.

Looking for opportunities to play cricket, Richards came to England to join Hampshire CCC in 1968 and immediately took County Cricket by storm scoring a monumental 2395 runs in his first season at the club and in doing so was the leading scorer in the country. The 1969 Wisden Cricketer of the Year, in his short International career which comprised of four Test matches, Richards scored 508 runs at an incredible average of 72.57 and his contribution during that series was hugely influential in the 4–0 win. With South Africa’s exclusion from International cricket coming to an abrupt ending, Richards’ magnificent start to his Test career would in fact prove to be the entirety of his International career. Barry Richards speak of his brief career at the height of cricket and his disappointment of being unable to continue representing his country during his work as a cricket speaker.

Richards in turn played around the world in search of First Class cricket and during his time with South Australia in the Sheffield Shield scored 325 in a single days play, a breath-taking achievement that is still widely discussed. Richards scored a colossal 1538 runs in just 10 matches at an average of 110, a speculator return and accomplishment by anyone’s standards. Barry also returned to play for Natal in between 1971 and 1976 and enjoyed tremendous success as he passed the 1,000 run mark in two seasons out of the four he played and narrowly missing the mark in the other two seasons. Richards is still the only player to have scored a 1,000 runs in a Currie Cup season, an accomplishment that is unheard of with the season consisting of just 8 matches. Richards fondly reminisces on his time with Natal and speaks with great pride about the feats he achieved.

Alongside his incredibly fruitful career with Hampshire CCC where he established one the most successful partnerships the County Championship had ever seen with West Indian legend, Gordon Greenridge, Richards also played in the highly publicised World Series Cricket. Barry Richards was once again incredibly successful scoring 554 runs for the World XI against Australia with two centuries including a score of 207. Richards came out of retirement to play and captain in West Indies’ rebel tour to South Africa. Barry often recollects this ‘unofficial series’ in particular discussing an innings in which he had the entire Newlands crowd enthralled and gained huge adulation across the world with many suggesting if they were to choose a player to bat for their life it would most certainly be Richards. These fond memories are eloquently spoken of during Barry’s extensive work as a cricket speaker.

In what is widely considered as one of the greatest First Class careers of all time, Richards tenure in first-class cricket between 1964 and 1983 resulted in him prolifically scoring 28,358 runs including a spectacular 80 centuries which included a best of 356. A first class average of 54.74 was also coupled with 8,506 one day runs and a further 16 centuries. Barry Richards is most certainly a legend of cricket and is still considered amongst the greatest batsman of all time despite his limited International exposure.

Following his retirement, Barry Richards has worked as a cricket speaker alongside his media and broadcasting commitments. Held in the highest regard and looked upon with the utmost respect, Barry Richards has worked for Test Match Special, Channel 4 and FIVE following his dispute with broadcasting company, South Africa’s MNet Supersport. Richards work as a analyst and commentator has only added to his demand and popularity as a figure within cricket and in particularly as a cricket speaker.

A ICC Cricket Hall of Fame inductee, Barry Richards was selected as the opening batsman by the legendary Sir Don Bradman to be a part of his 20th century team, a true testament to Richards’ prowess. A tremendously affectionate an charismatic personality, Barry Richards is available to hire as a cricket speaker for any event, awards presentation or dinner and his vast array of knowledge coupled with a host of tales and anecdotes ensure a truly wonderful and unforgettable event.

When he’s at corporate events, Barry is known to cover the following topics:

To book South African Legend, Barry Richards, as the cricket speaker for your corporate event, function or conference, simply contact the Champions Cricket Speakers agency by filling in our online contact form. Alternatively, call a booking agent directly on 0207 1010 553.