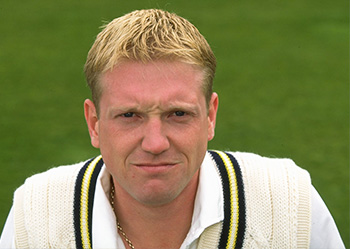 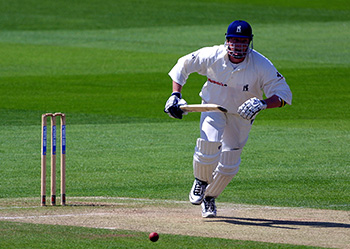 Dominic Ostler is former for Warwickshire County Cricket Club that spent over a decade with the club before going on to become a dedicated cricket speaker and frequently appearing at Warwickshire CCC after dinner events and speaking engagements. A successful and prolonged career at Edgbaston Cricket Ground, Ostler was a right handed batsman who was also an outstanding slip fielder and also had the ability to bowl and occasionally play as a wicketkeeper.

Born and raised in Warwickshire, Dominic Ostler has great pride in the fact he was able to represent his home county. Making his First Class debut in 1990, Ostler remained with Warwickshire until 2003 and during his extended tenure at the club garnered a huge deal of respect and affection amongst local supporters and as a result is often called upon to appear as a cricket speaker at both club events and private fan events.

Awarded his County Cap in 1991 having scored 1284 runs at an average of almost 40 which included his maiden First Class hundred. Ostler’s success during the 1991 season set the pattern for the next four years of Ostler's career as he personified the meaning of consistency, despite rarely being a flamboyant scorer Dominic was ever-present in Warwickshire's middle order in both first-class and List A matches. Passing 1000 first-class runs in a season in 1992, 1993 and 1994 and once again fell just in 1995. Ostler developed a knack of turning good days into great days as he scored emphatically large centuries making 192 against Surrey CCC and the following season making 174 before continuing this tendency by scoring 186 against Yorkshire and in 1995 his first double-century was a score of 208 in the home match with Surrey. During his work as a cricket speaker Ostler shares the secrets to his success and about how he was able to capitalise on opportunities and be truly ruthless, a skill that is transferable and relevant to any walk of life.

Dominic Ostler’s prolific form earnt him an England A call up however shortly after this he suffered from a loss of form and confidence, a testing time that he talks about with his audience during his work as a cricket speaker. Ostler shares the thought processes and rituals he engaged in to return to his prolific run making, something he began once again in 2000 season, when he scored 1096 runs at a career-best average of 49.81; he was also rewarded a benefit in the 2000 season by Warwickshire for his tremendous service to the club.

Ostler was once again heading for similar success in 2001, having already averaged almost 50 for a large part of the season to go along with the 22 catches he had taken in just 10 first-class games, Dominic’s season came to an abrupt end with an elbow injury during a match against Derbyshire. Earlier in the 2001 season he had recorded his highest one-day cricket score with an unbeaten innings of 134 against Gloucestershire and in 2002 he returned from the set back to make 1039 first-class runs at an average of 43.29, taking 24 catches in 14 matches as well; the runs included an innings of 225 late in the season against Yorkshire off just 240 balls, which was his highest first-class score. A superb First Class career, during his work as a cricket speaker Dominic Ostler fondly remissness on his time as a professional and shares his knowledge and experience from a prolonged period in the game.

Dominic scored more than 10,000 first class runs for Warwickshire CCC and despite his retirement as a player he continues to be a dedicated supporter of the club as well as playing locally for Berkswell Cricket Club in the Birmingham League where he also performs across the county in a number of after dinner speaker events.

Ostler has utilised the knowledge and experience he garnered from his playing career to develop into a magnificent coach working at the highly prestigious King Henry’s School as well as working for Complete Cricket as a coach. A charming and welcoming personality, Dominic Ostler is cherished amongst Warwickshire fans and has a host of tales and anecdotes to share from a thoroughly distinguished career in professional cricket. Dominic Ostler is available to hire as a cricket speaker for any event, dinner of presentation evening and is certain to be a fantastic addition to any occasion.

When he’s at corporate events, Dominic is known to cover the following topics:

To book Former Warwickshire Player, Dominic Ostler, as the cricket speaker for your corporate event, function or conference, simply contact the Champions Cricket Speakers agency by filling in our online contact form. Alternatively, call a booking agent directly on 0207 1010 553.