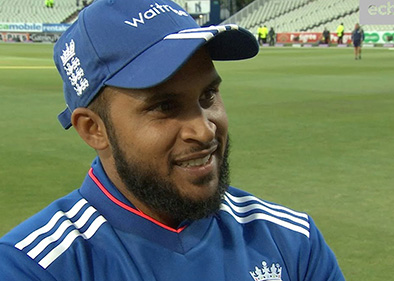 Adil Rashid is an English cricketer who plays for Yorkshire and England as a leg spinner. Previously a player with England Under-19s, in December 2008, he was called into the full England Test squad, for the Test matches to be played in India. He was then selected for the full tour of the West Indies. He made his Test debut on 13 October 2015 against Pakistan in the UAE.

As a leg spinner, Rashid received coaching from Terry Jenner as part of an ECB programme to encourage wrist-spinners. Rashid is only the third Yorkshire-born Asian to play first-team cricket for Yorkshire, and the first of Pakistani origin. In 2006, ECB bowling coach David Parsons considered him the most talented young leg-spinner in the country.

Rashid was born in Bradford, West Yorkshire, and is of Pakistani background. Like his England teammate Moeen Ali, he belongs to the Mirpuri community, his family having migrated to England in 1967 from Kashmir. His brothers Haroon and Amar are also cricketers.

Rashid showed promise from a young age: Jenner spotted him as a 14-year-old, and, in early July 2005, aged 17, he took 6–13 for Yorkshire's Academy (youth) team. A few days later he hit 111 for Yorkshire Cricket Board Under-17s against their Cheshire equivalents in the Under-17s County Championship.

In 2006, he played a number of games for Yorkshire Second XI, making four successive centuries. This form, combined with a calf injury to Darren Lehmann, earned him the chance to make his first-class debut.

When he's at corporate events, Adil is known to cover the following topics:

To book Adil Rashid as the after dinner cricket speaker for your corporate event, function or conference, simply contact the Champions Cricket Speakers agency by filling in our online contact form. Alternatively, call a booking agent directly on 0207 1010 553.