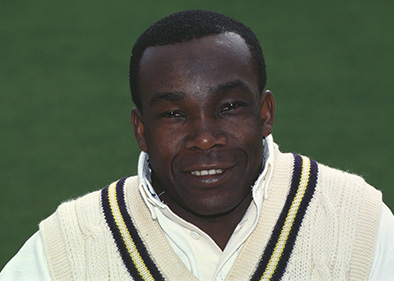 Barbadian born cricket speaker and former England cricketer Gladstone Small is well known for his playing career in both Test cricket and One Day Internationals. A popular right handed bowler, Small made up for his diminutive stature through his unrelenting work ethic and committed personality. The Warwickshire CCC and England bowler retired from cricket in the early 1990’s and has since worked as a dedicated cricket speaker.

Born in Barbados, Gladstone moved to England shortly after his fourteenth birthday which is usually the point after which a change of nationality is not permitted. However, Small applied for eligibility to play cricket for England and much to his delight the MCC accepted his application. A Manchester Metropolitan University graduate, Small has Klippel-Feil syndrome, which accounts for his distinctive "no neck" appearance and is also the reason for his nickname, Gladstone ‘no neck’ Small. Overcoming a number of barriers in his life, during his work as a cricket speaker Small discusses the drive and determination that was required to deal with the adversity and challenges he faced.

An integral member of the successful Warwickshire CCC team, Small’s impressive performances in domestic cricket led to International selection and recognition in 1986 where he made his Test debut against New Zealand before making his One Day International debut the year after. Representing England in 17 Test Matches and 53 One Day Internationals, Gladstone Small made a significant impression thanks to both his talent and his wonderful and committed attitude to both the game and his team. A capable player favoured by both his team mates and fans, Small is widely regarded and remembered as a strong team player. As well as his appearances in both Test and ODI cricket, Gladstone Small had the honour of representing England in both the 1987 and 1992 Cricket World Cup campaigns. During his performances as a cricket speaker, Gladstone Small recollects his time at the pinnacle of cricket along with sharing the incredible pride and honour he felt when representing the ‘Three Lions.’

Alongside his place in the England squad, Gladstone Small was also a hugely reputable domestic player and contributed to the strong Warwickshire side of the early 1990’s and remains incredibly popular and well respected amongst fans, teammates and adversaries within the game. Following his retirement from professional cricket Small began working as a cricket speaker for the Professional Cricketer’s Association before later progressing within the organisation to the Director of the Professional Cricketer’s Association. A massive advocate of English county cricket and the PCA, Small discusses the importance of the County Championship in being a fantastic grounding for the Test arena while also sharing the value and tremendous work done by the PCA.

As well as working as a cricket speaker for both corporate and club cricket events, Gladstone Small has been involved in the informal game of beach cricket and was a member of the national England squad in both 2006 and 2007. Renowned for his ability to swing the ball away for batsman during his playing days, Small’s propensity for unreliable bowling gave selectors cause for concern however during the 1986-87 Ashes, Gladstone was a last minute replacement for the fourth Test and rose to the challenge. Small recorded figures of 5-48 in Australia's first innings and also claimed two wickets in the second innings earning him the Man of the Match award and undoubtedly remains the highlight of his career and a moment he fondly reminisces on during his work as a cricket speaker.

The consummate professional and an incredibly endearing and affectionate personality, Gladstone Small’s popularity within English cricket is unrivalled and his reputation is spotless. Small’s distinguished and illustrious career allow him to share a host of tales and anecdotes with guests as well as distributing the diverse knowledge and experiences garnered from his playing days. An incredibly popular and well respected cricketing figure, Gladstone Small is available to hire as a cricket speaker for any event, function or occasion.

When he’s at corporate events, Gladstone is known to cover the following topics: