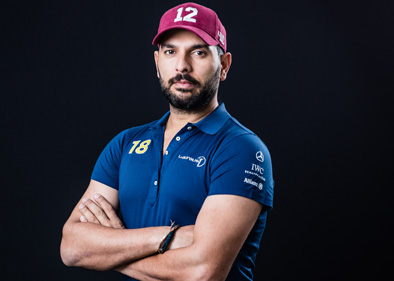 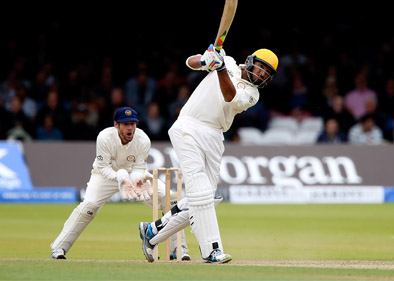 Yuvraj Singh is an Indian international cricketer, who plays all forms of the game. An all-rounder who bats left-handed in the middle order and bowls slow left-arm orthodox, Yuvraj is the son of former Indian fast bowler and Punjabi actor Yograj Singh.

Yuvraj is a member of the Indian cricket team in ODIs since October 2000 and played his first Test match in October 2003. He was the vice-captain of the Indian ODI team between 2007–2008. He was the Man of the Tournament in the 2011 ICC Cricket World Cup, and one of the top performers at the 2007 ICC World Twenty20, both of which India won. In a match against England at the 2007 World Twenty20, he famously hit six sixes in one over bowled by Stuart Broad — a feat performed only three times previously in any form of senior cricket, and never in an international match between two Test cricket teams. In the same match, he set the record for the fastest fifty in Twenty20 Internationals and in all Twenty20 cricket, reaching 50 runs in 12 balls. During the 2011 World Cup, he became the first player to take a 5-wicket haul and score a 50 in the same World Cup match.

In 2011, Yuvraj was diagnosed with a cancerous tumour in his left lung and underwent chemotherapy treatment in Boston and Indianapolis. In March 2012, he was discharged from the hospital after completing the third and final cycle of chemotherapy and returned to India in April. He made his international comeback in a Twenty20 match in September against New Zealand shortly before the 2012 World Twenty20.

In 2012, Yuvraj was conferred with the Arjuna Award, India's second highest sporting award by the Government of India. In 2014, he was awarded the Padma Shri, India's fourth highest civilian honour. At the 2014 IPL auction, Royal Challengers Bangalore bought Yuvraj for an all-time high price of ₹14 crore and, in 2015, the Royal Challengers Bangalore bought him again for ₹16 crore making him the most expensive player ever to be sold in the IPL. He is due to play for Mumbai Indians in the 2019 IPL.

When he’s at corporate events, Yuvraj is known to cover the following topics:

To book International Indian Cricketer, Yuvraj Singh, as the cricket speaker for your corporate event, function or conference, simply contact the Champions Cricket Speakers agency by filling in our online contact form. Alternatively, call a booking agent directly on 0207 1010 553.