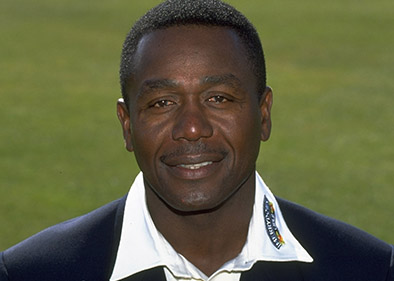 Desmond Haynes is a legendary West Indian Cricketer renowned for the infamous and prolific opening batting partnership he forged with Gordon Greenidge in the 1980s. A dynamic and devastating duo, Haynes and Greenidge scored a staggering 6,482 runs during their dominant partnership at the top of the innings for West Indies, establishing themselves in the history books by scoring the third highest partnership in Test Match history. The more measured batsman of the pair, Haynes complied over 7,000 Test runs with a career best score of 184 against England. Scoring a century on his One Day International debut, Desmond is one of only two players in ODI history to have scored a century on his debut and his last match, the perfect way to begin and end any career. Following his retirement in 1997, Desmond Haynes has focused his attention to after dinner speaking and has become an incredibly popular and revered cricket speaker.

A feared West Indian opening batsman, the century Haynes scored on his ODI debut remains the highest score ever by a player on their One Day International debut as well as being the fastest hundred scored by any player on ODI debut. Incredibly disciplined as a player and person, Haynes is one of only three West Indian players to carry their bat through a Test innings and spectacularly achieved this feat on three separate occasions, an accomplishment only one other cricketer has ever managed. Representing West Indies in over 100 Test Matches and over 200 One Day International games, Haynes scored over 16,000 international runs at an average of over 40 as well as scoring 35 International hundreds. A true icon of West Indian cricket, during his work as a cricket speaker Desmond Haynes shares his experiences from a distinguished career at the pinnacle of the game along with recollecting a truly dominant period that the West Indies enjoyed.

Haynes also enjoyed an incredibly successful career in English county cricket where he played for Middlesex CCC in between 1989-1994 prior to a playing for Western Provence in Australia. A remarkable domestic career, ‘Dessie’ as he is often referred to, scored over 7,000 runs for Middlesex CCC at an average of almost 50. Haynes’ First Class career best came during his time at Lords scoring a blistering 255 not out against Sussex CCC. Awarded with his Middlesex CCC Cap in 1989, Haynes also played 63 First Class matches for Barbados and went on to score almost 5000 runs again at a phenomenal average of almost 50 and a top score of 246.

His final domestic stint with Western Province which preceded his retirement yielded another 1340 runs at an average over 40 meaning he ended his First Class career with a colossal 26030 runs at a extraordinary average of 45.90 to go along with the 15651 he scored in List A matches. With 61 First Class hundreds to his name and 55 man of the match awards, Haynes’ has great pride in his outstanding domestic career and during his work as a cricket speaker he fondly reminisces on the impact he made on cricket along with his love for the County Championship and honour of being able to call Lords his home ground.

Following his retirement, Desmond Haynes joined the Board of Selectors at the Barbados Cricket Association before later becoming the Secretary of the West Indian Players’ Association and finally progressing onto his most prestigious administrational role as the Director of The West Indian Cricket Board. An unbelievably proud West Indian, Haynes speaks of his involvement in West Indies cricket both on and off the field with great pride and satisfaction during his performances as a cricket speaker.

Desmond’s enormous range of experiences throughout cricket both as a board member and as an International player promote and propel his abilities as a speaker; this coupled with his articulate speaking proficiencies help make him a popular addition to any event or function as a cricket speaker. Representing West Indies in four World Cup campaigns, Haynes’ experiences and stories about competing in the most prestigious tournament in International cricket are unrivalled and again add to his popularity already impressive repertoire of content as a cricket speaker.

A tactically astute cricketer who captained his nation, Haynes’ has one of the most superior cricketing brains of all time. Able to effortlessly strike fear into bowlers around the world, Desmond Haynes’ infectious personality and charismatic persona allow him to resonate and relate to guests at any event. Instantly recognisable largely due to his famously broad smile, Haynes adds a truly special touch to any event and provides a host of tales and anecdotes from his extensive career within cricket that are certain to entertain and captivate any audience. Desmond Haynes is available to hire for any event, function or cricket dinner and his presence at any occasion will without a doubt prove incredibly popular with guests.

When he’s at corporate events, Desmond is known to cover the following topics:

To book West Indian Legend, Desmond Haynes, as the cricket speaker for your corporate event, function or conference, simply contact the Champions Cricket Speakers agency by filling in our online contact form. Alternatively, call a booking agent directly on 0207 1010 553.