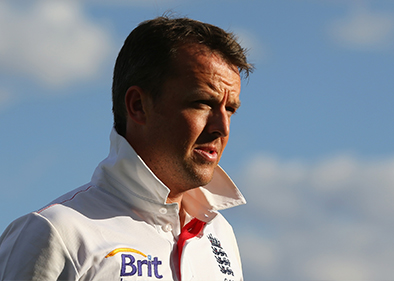 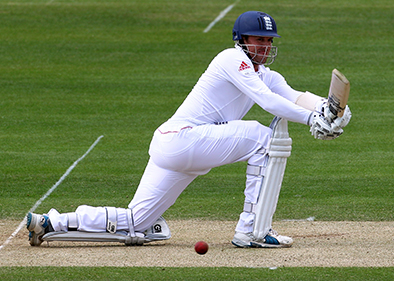 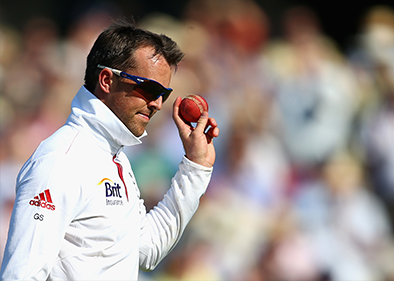 One of England's Greatest Spin Bowlers

Graeme Swann is a former England cricketer who played county cricket for Northamptonshire CCC and Nottinghamshire CCC. Arguably one of the best spinners to have ever played for England, Swann’s time in International cricket saw him become an indispensable member of the England team and pivotal figure in England’s world dominance. The former ECB Cricketer of the Year has worked extensively as a cricket speaker since his retirement as a player alongside work as a commentator and pundit for both BBC’s Test Match Special and BT Sport.

Born in Northamptonshire, Swann went on to make his First Class debut for his home county in 1997 and remained at the club until 2005 where he moved to Trent Bridge to join Nottinghamshire CCC. Although Swann got his first taste of International cricket while still playing for Northamptonshire, his International career took off during his time with ‘The Outlaws’ following his Test Match debut in 2008. During his work as a cricket speaker Swann recollects his time in domestic cricket and how it acted as a fantastic grounding for his career allowing him to practise and perfect his trade.

Making significant contributions in the shorter form of the game, Swann’s all round ability made him a vital component of England’s ODI team. He announced his arrival onto the Test match scene in dramatic fashion taking two wickets in his first over and in doing so became only the second to ever do so. Swann went on from this dramatic start to take three five wickets hauls in successive test against the West Indies as well as contributing fantastically with the bat. A formidable start to his international career, during his work as a cricket speaker Swann speaks of the passion he played with that made him so popular amongst fans as well as explaining how this great start to his career gave him a tremendous amount of confidence and self-belief.

Playing throughout the 2009 Ashes, Swann was a crucial component in England’s series victory and ended the series with 249 runs at an impressive average of 35 to go along with 14 wickets which made him England’s second highest wicket taker in the series and included the final match and series winning wicket during an unforgettable spell of spin bowling. Graeme once again was instrumental to England’s success in the 2010 ICC World Twenty20, a tournament which England went on to win and which Swann again huge applause and recognition for culminating in him being awarded the England Player of the Year award. The ECB recounted Swann’s performances that year as a "remarkable 12 months in which his attacking off spin and hard-hitting lower-order batting have proved instrumental in one of the most successful years that the England cricket team has ever known." A breath-taking and award winning year, Swann speaks of the teams success on a global stage along with what made that season so successful for himself.

Continuing to from strength to strength, Swann was widely regarded as the best spinner in the world and he showed why during the 2010-11 Ashes Series in Australia where the England team beat Australia down under, a rare and unique accomplishment that is cherished by Swann. A series that saw him perform admirably and greatly outperform his Australian counterparts, his performances that series cemented his status as the greatest spin bowler in the world and the ICC ranked Graeme as the 2nd best Test match bowler in the world. With a famous and historic Test series win against India, a tour which is said to be the biggest test for any team in the world, Swann speaks of the teams glories during his performances as a cricket speaker and expands upon the achievement that made England the best Test Match team in the world.

Swann ended his career prematurely due to an elbow injury and discusses the agony and anguish he felt at having to end a fairy-tale career, receiving plenty of criticism and scrutiny to retire in the middle of an Ashes Series, Swann sheds light on his decision as well as discussing the darker side of professional sport and the vast criticism that accompanies success. A tremendously successful career, Swann was also involved in a fair share of controversy and these events make for fascinating content during his work as a cricket speaker.

Arguably one of England’s greatest spin bowlers, following his retirement Swann has worked extensively as a cricket speaker and commentator namely for BBC’s Test Match Special and BT Sport covering cricket around the world and becoming exceedingly popular with viewers largely due to his humorous style. A special talent and fierce competitor, Graeme Swann enjoyed a remarkable and illustrious career in cricket and through his distinguished career has complied a host of tales and anecdotes to share with guests along with recounting the abundance of knowledge and experience he gained throughout his time in the game. A real entertainer and natural performer, England spin bowling hero Graeme Swann is available to hire for any event or function and is certain to be a fantastically entertaining addition to any occasion.

When he’s at corporate events, Graeme is known to cover the following topics:

To book England Spin Bowling Hero, Graeme Swann, as the cricket speaker for your corporate event, function or conference, simply contact the Champions Cricket Speakers agency by filling in our online contact form. Alternatively, call a booking agent directly on 0207 1010 553.