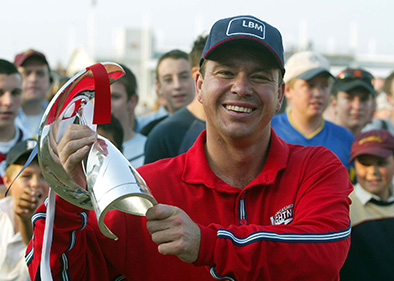 Former Lancashire CCC and England wicket keeper batsman Warren Hegg has become an incredibly popular and sought after cricket speaker following his retirement from the game in 2005. Playing for Lancashire CCC for almost two decades and also captaining the county, Hegg enjoyed a thoroughly impressive and distinguished career as a player and has experienced paralleled success as a cricket speaker. A stalwart and record holder at Lancashire CCC, Hegg remains incredibly popular at the county and is cherished by both fans and his counterparts ensuring him regularly performing at numerous club events in his role as a cricket speaker where he often discusses his affinity for the Northern county.

Making his First Class debut for Lancashire CCC in 1968, Hegg epitomises loyalty as he remained at the county for the entirety of his playing career. Taking over 1,300 dismissals in his career as a wicket keeper, in 1989 Warren set a Lancashire CCC record when he held 11 catches in a single match First Class match and the fifth in the list of the most dismissals for a wicket keeper in the history of the game. Renowned for his tremendous wicket keeping ability, Warren’s batting prowess was often overshadowed however his exploits during the semi final of the Benson & Hedges Trophy semi-final showcased his capabilities. Chasing 251 to win, Lancashire were 97/5 when Hegg arrived at the crease and further wickets continued to tumble around him however Hegg scored 81 from 62 balls to help steer his county to victory by 1 wicket from the very last ball of the match. During his performances as a cricket speaker Hegg reminisces on this incredible feat and expresses how the feat was even more special as it led to a winning cause.

Hegg’s consistency as both a wicket keeper and a batsman eventually led to International recognition as he was selected to play in the 1998-99 Ashes Series to play two Test Matches. Touring both India and New Zealand following his appearances for England in the Ashes, despite being a part of the squad Warren never played a match for England again and as a cricket speaker he shares the honour and pride he felt at receiving his England cap but also speaks of the disappointment and not playing for his country again even though he continually performed to an incredibly high standard in domestic cricket. Appointed the Captain of Lancashire CCC in 2002, Hegg led the team to second and third in the County Championship and provides vital leadership advice and techniques during his performances as a cricket speaker.

Ended his career earlier then he had hoped, two weeks before the end of the 2005 season a delivery from fast bowler and fellow cricket speaker James Anderson ricocheted off the batsman’s stumps and hit Hegg on the thumb, the freak accident forced Hegg's season to end prematurely and meant he finished with a total of 951 first-class dismissals, of which 919 were for Lancashire just six short of George Duckworth's Lancashire record of 925. Agonisingly close to breaking the record that would have been a fitting achievement for his glittering career, Hegg nevertheless ended his career with over 11,000 runs to go with over 1,000 dismissals highlighting his superb all round ability.

A hugely respected and revered player and personality across the nation and in particularly at Lancashire CCC, Hegg has accumulated a host of entertaining and insightful tales and anecdotes to share with his guests along with an abundance of knowledge and experiences that make for fascinating content as a cricket speaker. A revered player and captain that will forever be remembered as a legend of the club, Warren Hegg is available to hire for any event, dinner or presentation evening and is certain to be an idyllic addition to any occasion.

When he’s at corporate events, Warren is known to cover the following topics: