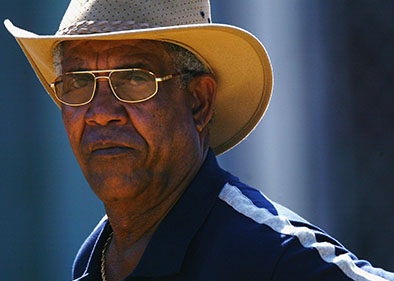 The Greatest All-Rounder of All Time

Considered one of the best all-rounders in cricket history, Sir Garfield Sobers, more commonly known as Gary is the epitome of a legend. Representing the West Indies for 20 years, Gary Sobers’ incredible all round ability set the benchmark for players forever and his versatility as a player is unrivalled. A devastatingly talented batsman who was able to bowl left arm swing and slow after spin to an extraordinary standard, Sobers was also a masterful fielder and more then able wicketkeeper making him arguably the perfect cricketer. Captain of the West Indies team for a number of years and the captain of the Rest of the World XI team during their 1970 tour of England, Sobers was knighted by Queen Elizabeth II in 1975 for his services to cricket. With not enough superlatives available in the English dictionary to do justice to his prowess, Sir Garfield Sobers is without doubt one of the most prestigious and sought after cricket speakers in the world.

Sobers made his debut in First Class cricket aged 16, progressing on to play 383 First Class matches and scored over 28,000 runs and along with taking more than 1,000 wickets. Along with a remarkable career in domestic cricket, Internationally Sobers scored over 8,000 runs at a staggering average of almost 60 in addition to taking over 230 wickets. An extraordinary cricketing talent, Sobers won a host of accolades and was named the West Indian Cricket Cricketer of the Year in 1958-59, Wisden Cricketer of the Year in 1964, The Cricket Society Wetherall Award for the Leading All-Rounder in English First-Class Cricket and the Walter Lawrence Trophy winner to name a few. With a breath-taking career in the game, Sobers has become a wonderful after dinner speaker and cricket speaker, proving to be a popular addition to events across the globe.

Named Wisden Cricketer of the Century in 2000, Sobers has enjoyed a distinguished career including breaking the record for the highest test score, scoring 365 at just 21 years of age. Regarded as a ’National Hero of Barbados’ by their Parliament in 1998, Sobers is a national treasure, and cricketing icon; this makes his stature as a cricket speaker and after dinner speaker even more desirable and sought after. An accomplished man both in his profession, and throughout his life, Sobers is an articulated wordsmith who manages to convey his thoughts into words seamlessly and in such a way that he leaves the audience fully engaged.

Playing with a style that was both elegant yet powerful, Garry Sobers is a cricketing talent which will live long in the memory of those following the game. A man of integrity and passion for his sport, Sobers has become a real hit within the cricket speaker circuit. Telling tales about his journey through Cricket, from the backstreets of Bridgetown, to International sporting stardom, Sobers offers talks as an after dinner speaker which will captivate any sports fan; his strength of mind to reach the top helps him to stand out as a desirable cricket speaker, a fantastic addition to any event.

Incredibly popular wherever he goes and instantly recognisable, Sobers also famously hit six sixes in an over while playing for Nottinghamshire CCC becoming the first batsman to ever do so in First Class cricket. A cricketing icon, Gary Sobers is the perfect addition to any event as a cricket speaker and is certain to be engage and mesmerise the audience. The National Hero of Barbados, Sobers has a host of tales and anecdotes to share from his career along with a huge array of experiences and knowledge that are incredibly insightful and informative. An idyllic gentleman and ICC Hall of Fame inductee with an incredible presence, Sir Garfield Sobers is available to hire as a cricket speaker for any event, dinner or function.

When he’s at corporate events, Sir Garfield is known to cover the following topics:

To book Legendary West Indian All-Rounder, Alastair Cook, as the cricket speaker for your corporate event, function or conference, simply contact the Champions Cricket Speakers agency by filling in our online contact form. Alternatively, call a booking agent directly on 0207 1010 553.