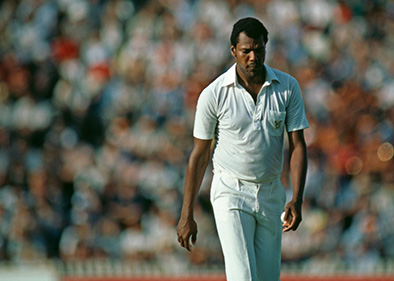 Colin Croft is a former West Indian cricketer who was an aggressive and hostile fast bowler during the legendary era of West Indies cricket. A prominent member of the popular BBC’s Test Match Special shows, Croft still holds the record for the best Test innings figures by a fast bowler from the West Indies. Following his retirement as a player, Croft has turned his attention and expertise to commentary and the after dinner speaking circuit where he specialises as a cricket speaker. A member of the potent and feared famous West Indies fast bowling quartet, Croft has a host of tales and anecdotes to share during his work as a cricket speaker.

An imposing figure, Croft stood at 6ft 5in tall striking fear into his opponents before her delivered a ball. Renowned for his tendency to bowl with great hostility, Croft is well-known for bowling from wide of the crease in order to violently angle the ball towards the batter. The names Croft, Marshall, Holding and Garner gave batsman around the world nightmares for almost two decades. Unconventional in his style, during his work as a cricket speaker Colin Croft fondly reminisces on being a part of the historic and legendary side that many consider to be the best International cricket team of all time.

Never far from controversy, during the ill-tempered test series with New Zealand in 1979-80, Croft along with the rest of the West Indies team refused to emerge from the dressing rooms as a protest to umpire Fred Goodall’s officiating and decision making which was perceived to hugely favour the home side. Eventually persuaded to resume the match, Croft notoriously collided with Goodall at the end of his run-up during the fourth day's play after knocking a bail off the stumps with a previous delivery. A moment he is not necessarily proud of, Croft’s actions came as a result of being unhappy at the umpire frequently calling no-balls and turning down a number of appeals. During his work as a cricket speaker, Colin Croft recollects this hostile and animated period of affairs.

In 1982, Croft controversially accepted an invitation to take part in the ‘rebel tour’ to apartheid-divided South Africa. Disregarding the International ban involving South African sport at that time, the touring party were granted ‘honorary whites’ status and privileges by South African government as recognition and appreciation of their participation. Despite the privilege bestowed upon them, the tour party were subsequently banned for life from International Cricket which ended Croft’s International career. A hugely impactful consequence and decision, during his work as a cricket speaker Croft shares a comprehensive explanation behind his reasoning to participate with the tour, along with the intricacies and finer details of being involved in the notorious tour. This topic along with Croft’s incredibly honest and inclusive version of events have propelled Colin Croft as an incredibly sought after cricket speaker.

Following this ban and the consequences in held, Croft went on to play for Demerara and Lancashire CCC with great success and ended his First Class and domestic career with over 500 wickets at a staggeringly low average of 24 to go along with the 155 International wickets he took at a remarkable average just over 20. A phenomenally talented bowler, many wonder what could have been for Croft in International cricket had it not been for his ban.

The controversial cricketer turned his attentions to media commitments, providing analysis during the 2007 ICC Cricket World Cup for BBC radio as well as working extensively for Sky Sports covering all manner of matches especially those involving the West Indies. Unbeknown to many, Croft worked as an Air Traffic Controller during his time playing cricket for the West Indies and since then has also gone on to obtain a Commercial Airline Pilot's licence in the USA, with endorsements for the UK, and worked as a Commercial Pilot in the Caribbean.

An entertaining and enigmatic cricket speaker, Colin’s ability to meticulously deliver the information to the audience allow him to transport the guests at any event on a breath-taking journey and experience the trials and tribulations he faced whilst playing in an apartheid-divided country, against the wishes of the rest of the world, a quite extraordinary story. Regularly enthralling audiences around the world, Croft regularly captures the full imagination and attention of his guests to the point that a pin drop can he heard during his talks moving and powerful performances as a cricket speaker. Filled with a host of tales and anecdotes, Colin Croft is available to hire as a cricket speaker for any event, function or cricket dinner and this rare opportunity is one not to be missed.

When he’s at corporate events, Colin is known to cover the following topics: