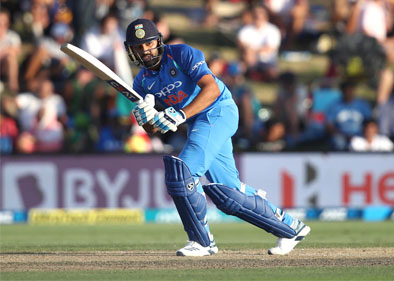 Rohit Gurunath Sharma is an Indian international cricketer who is the vice-captain of the India national team in limited-overs formats. He is a right-handed batsman and was an occasional right-arm off break bowler. He plays for Mumbai in domestic cricket and captains Mumbai Indians in the Indian Premier League.

Having started his international career at the age of 20, Sharma quickly came to be pegged by many analysts as a permanent fixture in the Indian cricket team in the next decade. He made his ODI debut on 23 June 2007 against Ireland. In CT 2013, he started playing as an opening batsman for India ODI team and performed consistently. He scored consecutive centuries in his first two Test matches against the West Indies in November 2013, scoring 177 at the Eden Gardens in Kolkata on debut, followed by a score of 111* in the next Test at the Wankhede Stadium in Mumbai. He played 108 ODIs before playing his maiden Test.

On 13 November 2014, Rohit Sharma scored 264 against Sri Lanka at Eden Gardens, Kolkata, which is the highest individual score in ODIs and second in overall limited 50 over match. He has also scored 106 against South Africa in Twenty20 Internationals and became the second Indian to score a century in all three formats. He also won T20 Innings of the Year Award by ESPNCricinfo. He is also the fastest batsman to score 100(35 balls) in T-20 against Sri Lanka. He then became the only player in the world to score three double hundreds in ODIs.

Rohit Sharma is the first skipper to lead his team to the IPL title thrice. As per Forbes India 2015 Top 100 celebrities in India, Sharma is listed 8th in terms of fame, 46th in terms of income and 12th overall. In November 2018, he became the first cricketer to score four centuries in T20 international cricket.

When he’s at corporate events, Rohit is known to cover the following topics:

To book Internationa Indian Cricketer, Rohit Sharma, as the cricket speaker for your corporate event, function or conference, simply contact the Champions Cricket Speakers agency by filling in our online contact form. Alternatively, call a booking agent directly on 0207 1010 553.