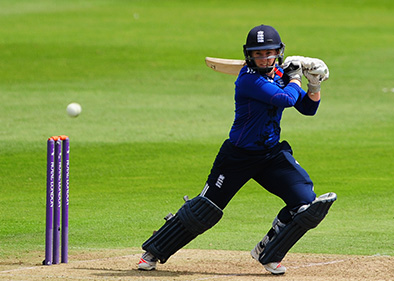 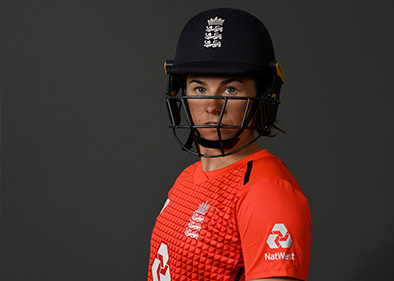 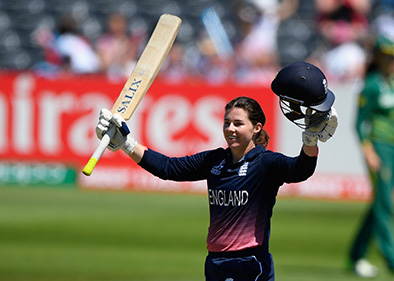 Tammy Beaumont is wicket keeper and batsperson who is currently a prominent member of the England Women’s team and the Kent Women’s team. The second highest Women’s One Day International score for England of 168 not out, Beaumont is an integral member of the England Women’s team and was selected ICC Women’s ODI Team of the Year in 2017 following her exploits in England’s successful World Cup winning campaign. A coaching ambassador for Chance to Shine, Beaumont is somewhat of an icon within the women’s game and is currently one of the most popular and recognisable figures in the game. A ICC Women’s World Cup winner, Tammy Beaumont is an incredibly sought after figure on the after dinner speaker circuit as a cricket speaker.

Beginning her domestic career in 2007 for the Kent Women’s team as batter, it was a few months later that she made her debut as a wicket keeper and a number of impressive performances led to her selection in the England Development Squad to play in the European Championships. Beaumont continued to play successfully for Kent and went on to score her maiden century in a match winning cause. These performances led to Tammy receiving International recognition in 2009 as she embarked upon her International career. As a cricket speaker Beaumont discusses the beginning of her career along with sharing her fondness Kent. A consummate professional, Beaumont is renowned for her tremendous work ethic and unrelenting pursuit to improve, traits that she exudes during her work as a cricket speaker.

Continuing to progress and go from strength to strength Tammy consistently improved and grew with confidence in her role within the side and was a part of the England Women’s Academy for a number of spells. Having represented the Surrey Stars in the Kia Super League, Beaumont has garnered plenty of experience in the shortest format of the game and her prowess in the format has largely come down to her versatility and innovative stroke play. Tammy has also played in the Women’s Big Bash League in Australia where she was an essential member of the Adelaide Strikers team. Beaumont’s wonderful exposure to cricket around the world allows her to share a host of insightful and entertaining tales and anecdotes as a cricket speaker allowing her to captivate and motivate her guests.

The highlight of Beaumont’s career to date came during the 2017 ICC Women’s World Cup in which England historically emerged victorious. Tammy reminisces on the unforgettable tournament during her work as a cricket speaker with huge fondness and pride providing a glimpse into the history created by the team. She along with fellow cricket speaker Sarah Taylor set the highest 2nd wicket partnership ever in the history of Women's Cricket World Cup and was individually fantastic as she was named the Player of the Tournament for the 410 runs she scored during the competition. Beaumont’s wonderful performances coupled with the success of the team led to her being honoured with an MBE, an extremely prestigious form of recognition and one she humbly expands upon as a cricket speaker.

With three ODI centuries already to her name that have all contributed to victories, England’s batting superstar Tammy Beaumont has already established herself as a prominent figure within the women’s game and her work within the community and to promote the game amongst young girls has further enhanced her popularity and stature. A well rounded and eloquent cricket speaker, Tammy shares her knowledge and experience along with expanding upon the continual growth of the women’s game. An incredibly well respected and revered figure, World Cup winner and England hero, Tammy Beaumont MBE is available to hire as a cricket speaker for any event, dinner or function and is certain to be an idyllic addition to any occasion.

When she’s at corporate events, Tammy is known to cover the following topics:

To book England Women's Hero, Tammy Beaumont MBE, as the cricket speaker for your corporate event, function or conference, simply contact the Champions Cricket Speakers agency by filling in our online contact form. Alternatively, call a booking agent directly on 0207 1010 553.