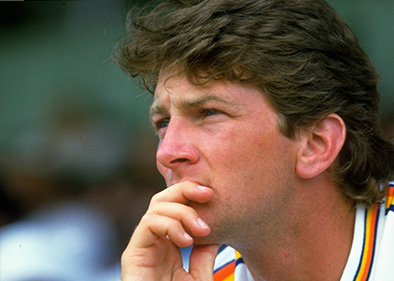 One of England's Fastest Bowlers

Greg Thomas is a former Welsh cricketer who played in five Test Matches and three One Day Internationals in between 1986 and 1987. Thomas is remembered as one of the few genuine fast bowlers that have ever played for England and struck fear into batsman in both International and domestic cricket. One of the few men able to match the speed of the irrefutable West Indian team of the 1985/86 tour, Greg Thomas is a much underappreciated sports speaker however his story within cricket and life make for fascinating content. Now retired, Thomas is a dedicated cricket speaker available for corporate and sports speaker events across the UK.

During his playing days Thomas was a genuine fast bowler, a rare sight in English cricket after the retirement of Bob Willis and apart from the raw pace, Greg also had a tendency to be erratic and often suffered from various injury problems. At his best, Thomas was one of very few bowlers that was able to match the speed of the fearsome and legendary West Indian pace quartet that is renowned and revered in Test Match cricket. Explosive but unpredictable, Thomas’ inconsistency leaked too many runs and his wayward bowling was largely to blame for his short International career. During his work as a cricket speaker Greg discusses his short period in cricket along with the ability that made him incredibly sought after coupled with the inconsistency that was ultimately his downfall.

Thomas did not play for England again after he joined the rebel tour to South Africa 1989-90, defying the International sporting boycott of the apartheid state. His involvement in this series along with that of the remainder of the touring party resulted in lengthy bans and huge scrutiny. Working as a cricket speaker Thomas discusses the consequences of opting to be apart of the tour and the criticism that followed the squad for years to come.

Involved in a number of battles during his career, the most famous one came against the West Indian legend Viv Richards who was notorious for punishing bowlers that dared to sledge him. So much so, that many opposing captains banned their players from the practice. However, in a county match against Glamorgan CCC, Thomas attempted to sledge him after he had played and missed at several balls in a row. He informed Richards: "It's red, round and weighs about five ounces, in case you were wondering". Richards hammered the next delivery out of the ground and into a nearby river. Turning to the bowler, he commented: "Greg, you know what it looks like, now go and find it". This hilarious encounter is recounting by Greg during his work as a cricket speaker and remains a fond memory from his playing days.

A hugely talented bowler with a unique ability to extract great pace, despite only a few appearances in International cricket, Greg Thomas still remains a rare asset and performer for England that is to this day talked out during the search for English fast bowlers. A cricketer who experienced a fascinating time within the game, Greg Thomas has a host of tales and anecdotes to share with guests and is available to hire as a cricket speaker for any event, dinner or presentation evening across the nation.

When he’s at corporate events, Greg is known to cover the following topics:

To book One of England's Fastest Bowlers, Greg Thomas, as the cricket speaker for your corporate event, function or conference, simply contact the Champions Cricket Speakers agency by filling in our online contact form. Alternatively, call a booking agent directly on 0207 1010 553.