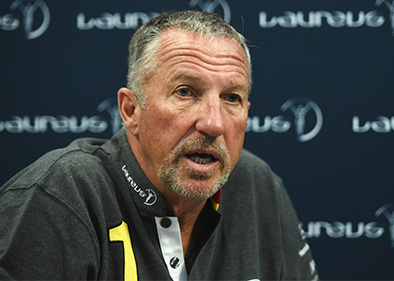 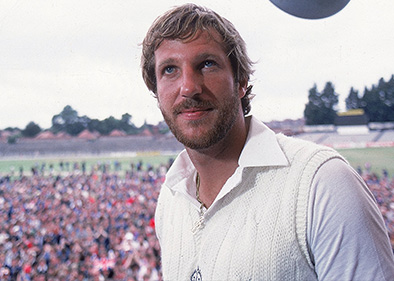 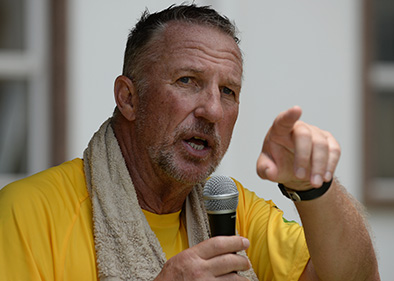 Sir Ian Botham is a former England Test cricketer and Test team captain who currently work as a cricket commentator alongside his role as the Chairman of Durham CCC. An incredibly entertaining personality, Botham transformed English cricket and is widely regarded as the greatest all-rounder to have represented the nation. With a career filled with highs and lows, Botham’s heroics did not come without extremely well published controversy and this securing his status as a superstar. A patron and ambassador for a number of charities, Botham has dedicated extended time and efforts around the world in order to advocate and promote various charitable organisations. One of the most recognisable and cherished figures in English cricket, Botham has worked extensively as a cricket speaker across the nation and become an incredibly sought after performer.

Beginning his career playing for Somerset CCC after impressing while playing for the MCC and the clubs Second XI before making his senior debut for the county aged 17. Going on to consistently contribute and dominate in domestic cricket for a number of year, Botham made telling and often match winning performances for Somerset CCC and earnt a call up to England’s Test Match team in 1977. Immediately making an impact on Test cricket Botham instantly became an integral member of the England team and his performances with both bat and ball gained huge praise and adulation leading to him being named the Young Cricketer of the Year and the Wisden Cricketer of the Year. During his work as a cricket speaker Botham discusses the beginning of both his domestic and International career along with his joy at making an immediate impact that led to numerous awards.

During the infancy of his career Botham sustained a foot injury that resulting in him requiring to go to the hospital and it was during one visit that upon taking a wrong turn led him to the children’s ward where he discovered children suffering with leukaemia which instantly struck Botham and sparked his charitable crusade on behalf of leukaemia research. This revelation led to Ian raising more than £12 million for charity with leukaemia research the main cause to benefit. In recognition of this work, Botham in 2003 became the first-ever President of Bloodwise, the UK's leading blood cancer charity and in 2007 he was invested a Knight Bachelor by Queen Elizabeth II at Buckingham Palace having been appointed in the Queen's Birthday Honours "for services to Charity and to Cricket." A huge and incredibly well deserved accolade, Botham reflects on the honour with great but more importantly speaks with extraordinary passion about his charitable exploits.

Sir Ian Botham enjoyed an incredibly successful and glittering career that led to him being renowned as one of the greatest all-rounders to play the game and became of the first cricketers to gain ‘celebrity’ status. The epitome of a genuine all-rounder, Botham’s destructive and hard hitting batting was coupled with an extremely impressive fast bowling ability. The former England Captain, Botham ended his illustrious career with over 100 appearances in both Test and One Day International cricket scoring over 7,000 runs and taking over 500 wickets in International cricket with a highest score of 208 and having taken a five wicket haul on 27 occasions. The second player in Test history to complete the "match double" of scoring 100 runs and taking 10 wickets in the same match, Botham represented England in three ICC Cricket World Cup campaigns and during his work as a cricket speaker recollects his International career sharing a host of entertaining and insightful tales and anecdotes from him distinguished career.

Botham played mainly for Somerset CCC, as well as Durham CCC and Worcestershire CCC as well as a season in Australia playing for Queensland. While at times a controversial player both on and off the field, Botham held a number of Test cricket records and until recently held the record for the highest number of wickets taken by an England bowler before being surpassed. One of the most impactful players that England has produced it is fair to say no player has ever had the ability to be a match winner quite like Sir Ian Botham.

In particularly renowned and remembered for his exploits against Australia in 1981, Botham’s extraordinary performances led to the series being known as Botham’s Ashes as he almost singlehandedly led England to victory. Reminiscing on this historic and unforgettable series during his work as a cricket speaker along with sharing other knowledge and experiences from his career along with sharing wonderful leadership advice that stood him in good stead during his tenure as England captain.

A media personality, commentator for Sky Sports and outstanding cricketer, Sir Ian Botham is also a avid golfer and enjoyed a brief period as a professional footballer. The ICC Hall of Fame inductee, Sir Ian Botham is without doubt a legend and icon of English cricket and has an incredibly entertaining story to share from a quite remarkable life and career. Sir Ian Botham is available to hire as a cricket speaker for any event, dinner or function and is certain to be a fantastically prestigious addition to any occasion.

To book Former England Captain, Sir Ian Botha,, as the cricket speaker for your corporate event, function or conference, simply contact the Champions Cricket Speakers agency by filling in our online contact form. Alternatively, call a booking agent directly on 0207 1010 553.