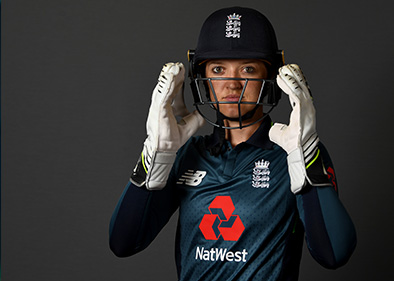 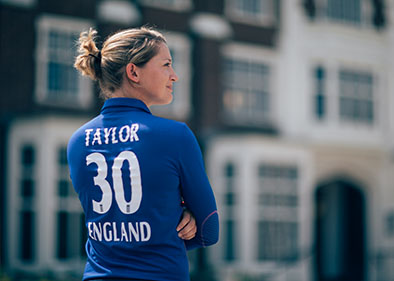 Sarah Taylor is the current wicketkeeper for England Women’s cricket team that is renowned for his tremendous and expansive stroke play. The first woman to play men's grade cricket in Australia, Taylor appeared as wicketkeeper for the Northern Districts in South Australia's Premier men's competition, Taylor is somewhat of a pioneer within the women’s game and also became the first woman to be inducted in the Legends Lane at the Brighton and Hove County Cricket Ground. One of the best cricketers in the women’s game, Sarah Taylor has won a number of awards and accolades as well as being a crucial figure in the transformation of the England team. Alongside her playing career Sarah Taylor also travels the nation as a cricket speaker where she is constantly in high demand due to her impressive stature within the game.

Currently playing domestic cricket for Sussex Women, Taylor has represented to county for over a decade and a half and has become a legend. Causing controversy with the MCC early in her career following her inclusion in the Brighton College Boys’ Team, Taylor went on to make her International debut in all three formats of the game in 2006 and immediately made an impact scoring her maiden One Day International century in just her 10th match. The youngest women’s cricketer to score 1,000 One Day International runs, during her work as a cricket speaker Taylor discusses her journey in the game along with sharing insightful information about to nature and emergence of the women’s game and challenges she faced during the infancy of her glittering career.

The holder of multiple records, Sarah also holds the record for the highest ODI score against Australia by an Englishwomen and also holds the record for the highest partnership in ODI cricket. Continuing to break the mould in cricket and create history, Taylor became the first lady to play in the Darton 1st XI and took the nation by storm as she played in men’s league cricket and was also earmarked to play First Class county 2nd XI cricket. Named the IT20 Women’s Cricketer of the Year in 2012 and 2013 she went on to be crowned as the ICC Women’s Cricket of the Year in 2014 showcasing her prowess in limited overs cricket and cementing her reputation as the best batswoman in the world. A spectacular performer in all formats of the game, Taylor was integral to the England Women receiving England central contracts and went on to become one of the first players to ever receive one. As a cricket speaker Sarah recollects the finest moments of her wonderful career as well as expanding upon the importance of central contracts to both performance and to participation.

At the helm of the cricketing world, in 2016 Sarah took a break away from the game due to her suffering from anxiety and felt the break would enable her to ‘prolong her career’. Discussing both the way she felt and the positive impact a break away from the spotlight had on her during performances as a cricket speaker, Sarah express the importance of mental health as well informing guests of the vast and extensive pressures she and fellow cricketers face. Returning to the game in 2017, Taylor was selected for the 2017 ICC Women’s Cricket World Cup and flourished as she went on to become a part of the England team that won the competition much to the delight of the nature. Taylor’s form is the competition was fantastic and she registered her highest ODI score, 147 during the trophy winning campaign and her phenomenal tournament was rewarded by her inclusion in the ICC Women’s ODI Team of the Year. A career that continues to see Taylor go from strength the strength, she has already played over 100 WODI’s for England scoring almost 4,000 runs at a staggering average of over 40 in addition to over 2,000 WIT20 runs.

Boasting experiences of playing at the highest level and being widely regarded as the best batter in the women’s game, Taylor’s ability as a wicketkeeper is also magnificent and she often takes catches that defy belief. Having played World Cup campaigns, Women’s Ashes Series’ and numerous International encounters around the world, Sarah Taylor has vast knowledge and experiences to share with guests along with a host of entertaining tales and anecdotes that are certain to be popular at any event. The enigmatic and enthralling Sarah Taylor is available to hire as a cricket speaker for any event, dinner or function.

When she’s at corporate events, Sarah is known to cover the following topics: