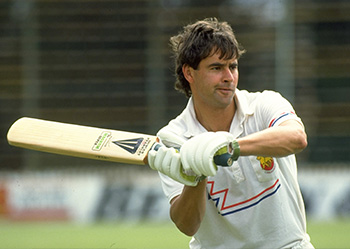 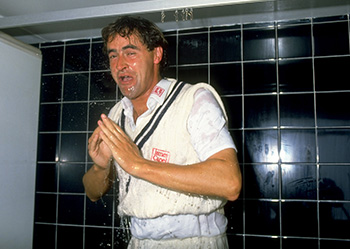 Chris Cowdrey is a former England cricketer and part of arguably the most famous and esteemed cricketing family in England. A part of three generations of English cricketers, following in the footsteps of his father, Colin, Chris Cowdrey also captained England and is now one of the most well-respected personalities on the after dinner speaker circuit where he works extensively as a cricket speaker. An illustrious career that saw him represent Kent CCC, Glamorgan CCC and England as an all-rounder, Cowdrey’s cricketing exploits coupled with his broadcasting and commentary have further propelled his popularity as a cricket speaker.

Initially playing for Glamorgan before moving to Kent CCCKent County in 2012, the family saw the fourth member of their family play for the county and highlight the affinity the family and Chris shares with the club. During his work as a cricket speaker Chris often discusses the families close ties with Kent and his pride at following his fathers footsteps before watching his son follow in those of his own.

An impressive season for Kent in 1984 saw Chris rewarded with selection for the 1984/85 England tour of India. Fielding at short leg on his debut, England captain David Gower asked Cowdrey to bowl, in complete shock at his captain’s request Chris forgot to take off shin pads and proceeded to bowl and with just his 4th delivery dismissed the legendary Kapil Dev and became only the 19th England player to take a wicket in their first over. A surprise to all none more so then his father, Colin who drove down infamously drove the wrong way down a one way street in disbelief of what he had just heard on the radio. During his work as a cricket speaker, Chris often depicts this unfathomable moment in a tremendously entertaining manner.

Following the tour of India, Cowdrey did not play for England again until 1988 during the infamous ‘summer of four captains.’ With England in disarray, Cowdrey had led his Kent CCC to the top of the County Championship table and as a result was selected to captain England in the fourth test against West Indies. Cowdrey’s captaincy was heralded by England’s chairman of selectors as being ‘just the style of leadership that is needed’ amid huge charge of favouritism, Peter May was both the Chairman of Selectors and Cowdrey’s Godfather. This Test would be the one and only time Chris captained his country and the last time he represented England. Often working as a cricket speaker, Cowdrey speaks of his brief International career with great pride having fulfilled a childhood dream and followed in the footsteps of his father.

A part of the Rebel Tour to South Africa in 1990, Cowdrey ended his career scoring almost 20,000 domestic runs to go along with his 9 International appearances for England. Following his retirement Chris has worked as a broadcaster and commentator for TalkSport along with being involved with several projects conducted by Sky Sports as well as commentating on a host of high profile cricket matches.

Along with his father Colin, Chris Cowdrey often works as an after dinner speaker at many functions for Kent CCC often entertaining members and audiences with tales from the clubs of highs and lows from years gone by to the present day.

Blessed with a truly diverse repertoire of information and experiences, Chris Cowdrey’s charming and enigmatic delivery discusses International cricket along with his personal experiences as captain of the England and in doing so provides a unique insight into the inner workings of the English team. Equipped with a host of tales and anecdotes, Chris Cowdrey is certain to be a fantastic addition to any event and is available to hire as a cricket speaker for any function, dinner or cricketing engagement where he is certain to provide a thoroughly entertaining and enthralling performance.

To book Former England Captain, Chris Cowdrey, as the cricket speaker for your corporate event, function or conference, simply contact the Champions Cricket Speakers agency by filling in our online contact form. Alternatively, call a booking agent directly on 0207 1010 553.