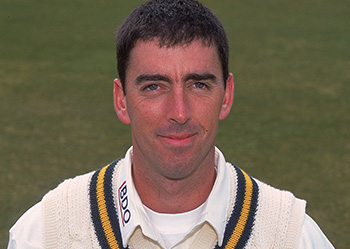 Darren Bicknell is a former cricketer and brother elder brother of former England Test player, Martin Bicknell. During an extensive career in county cricket Darren represented Surrey CCC and Nottinghamshire CCC, a tall left-handed opening batsman, early in his career Bicknell was often earmarked and touted to be an International sensation. The current head of cricket at Oakham School, Darren Bicknell has become a popular figure on the after dinner speakers circuit where he specialises as a cricket speaker often appearing at a host of cricket clubs across the nation.

Born in Guilford, Darren Bicknell constructed an impressive and notable First Class career most of which was played for his home county, Surrey CCC. Having joined the Brown Caps at the age of twenty, Bicknell remained at The Oval until 1999. Renowned consistent and reliable presence at the top of the innings, Darren was also a useful left arm bowler and forever popular amongst fans and supporters across the country. A Walter Lawrence Trophy winner in 1989, during his work as a cricket speaker Darren Bicknell fondly reminisces on his time spent with Surrey CCC, a club that will forever remain close to his heart and one of the most prestigious teams in County cricket.

Despite his extensive alliance with Surrey, after 13 years at The Oval Darren moved to Nottinghamshire CCC in 2000 where he remained until his retirement in 2006. Darren’s most productive season at Trent Bridge came in 2005 the 1131 runs he scored at an average just under 50 were absolutely crucial to Nottinghamshire’s County Championship success. A devastating middle order batsman in List A cricket, Bicknell is an enthusiastic cricket speaker who regularly makes appearances at both of his former teams, Surrey and Nottingham working at various events and functions as well as travelling the country and making guest appearances at charity cricket events and cricket dinners.

Playing over 500 professional matches during his distinguished county career, Darren Bicknell scored almost 20,000 First Class runs with a thoroughly impressive career best of 235 not out. Contributing almost 8,000 runs in List A cricket at an average just below 40, after retiring from professional cricket Darren went on to play minor counties cricket for Cambridgeshire. Bicknell’s prolonged career within the professional game allows him to provide an informative and insightful performance as cricket speaker. Providing a host of entertaining tales and anecdotes from his time within the game, Darren’s wisdom and knowledge is incredibly well respected across the circuit.

Involved in three England A tours, Bicknell is now the Chief Executive of the Belvoir Cricket and the Countryside Trust, a charitable organisation which aims to provide cricket and other sporting activities for young people. An avid golfer, Darren plays off 7 and can often be spotted playing at Radcliffe on Trent Golf club. An incredibly popular personality within cricket, Bicknell has continually received praise and adulation from cricket fans across the nation largely as a result of his infectious and friendly nature. A highly esteemed cricket speaker, Darren Bicknell is available to hire for all manner of cricket events and dinners across the country and is certain to be a fantastic addition to an occasion.

To book Former English Cricketer, Darren Bicknell, as the cricket speaker for your corporate event, function or conference, simply contact the Champions Cricket Speakers agency by filling in our online contact form. Alternatively, call a booking agent directly on 0207 1010 553.