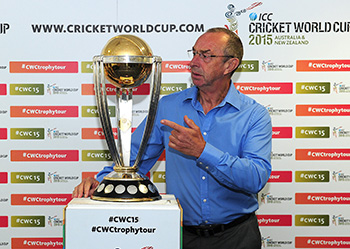 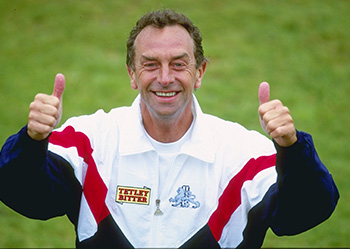 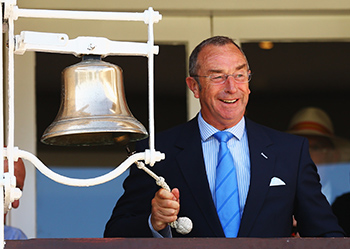 Former English cricketer, coach and cherished commentator, David Lloyd is without doubt one of the most recognisable personalities in cricket. Affectionately known throughout the cricketing world as ‘Bumble’, Lloyd enjoyed an impressive career spanning over 18 years with his beloved home county Lancashire CCC whilst also occasionally playing semi-professional football for Accrington Stanley. A short but truly impressive International career as a player, David Lloyd’s playing career and achievements are often overshadowed by his larger then life personality which has stolen the hearts of cricket fans across the world. Bumble’s popularity is unrivalled and this transfers to his work as a cricket speaker to where he remains one of the most sought after and popular performers on the after dinner speaking circuit.

A left handed batsman and spin bowler, Lloyd’s nine Test matches yielded over 500 runs at an impressive average of 42 to go along with his eight One Day International appearances in which he once again averaged over 40. A career best 214* in Test Cricket showcased his prowess as a highly skilled batsman. In First Class cricket David took 237 wickets as well as scoring almost 20,000 runs, a testament to his all-round capabilities and cementing his status as one of the most prominent players of his generation.

The former captain of Lancashire CCC, during his extensive career with the Red Rose county Bumble won the Gillette Cup on four occasions, three of which were won consecutively in 1970, 1971 and again in 1972 highlighting a period of domination at Old Trafford. David came a long way from the pair he scored on his First Class debut and retired a cherished figure in Lancastrian cricketing history. An ability to produce polished performances whenever at the crease, David Lloyd fondly reminisces on his distinguished career during his work as a cricket speaker and clearly conveys his pride and affection for the county.

Following his retirement as a player in 1983 which was preceded by a fruitful benefit year a few years before, David’ affinity with cricket continued as he became a First Class Umpire before taking on the roles as coach of both Lancashire CCC and the England National team, the latter of which came to an end after the 1999 World Cup. Discussing the aspects of teamwork and leadership in sport and eloquently relating them to business as a cricket speaker, David is a highly sought after personality on the after dinner speaker circuit.

Since his time coaching, Lloyd has established an incredibly successful media career as both a TV Presenter and Commentator. A regular member of the Sky Sports team since 1999, Bumble has covered England’s Test and ODI cricket however he is best known for his energetic commentary of which coincided with the emergence of Twenty20 cricket. With his notable and renowned array of catchphrases including ‘Start the Car!’, David’s outlook on Twenty20 is ‘a form of entertainment using cricket equipment’. Bumble most certainly adds to this entertainment through his infectious personality and thoroughly entertaining style of commentary. Able to provide a unique insight through his tremendous relationship with players and coaches, personal experiences and unrelenting quest to entertain & engage fans across the nation, Bumble has been known to jump into the gardens of houses to retrieve balls that have been hit out of the ground, his hilarious antics have made him a fan favourite.

An ideal personality for any cricketing event, David can either attend or host any event ensuring your function will be one to remember. Describing what it took to perform at a professional level as a player, coach and official, a consummate who takes huge pride in everything he does, David truly is a compelling an highly skilled cricket speaker. A natural entertainer who has succeeded in very facet of cricket, Lloyd’s wonderful and extended career in cricket has allowed him to compile a host hilarious of tales and anecdotes to share with guests along with a spectacular amount of knowledge and wisdom which provides an amazing insight into the game. A terrific cricket speaker and infamous cricketing personality, David ‘Bumble’ Lloyd is available to hire as a cricket speaker for any event, cricket function or cricketing dinner and is certain to provide an unforgettable occasion for his guests.