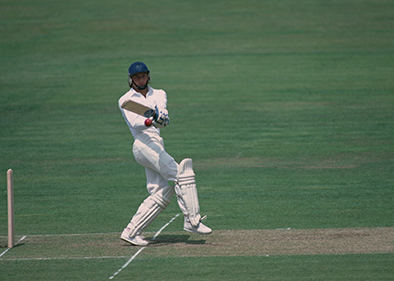 Graeme Fowler is a former English cricket player who is best known for his time playing for England and Lancashire CCC. Affectionally known as “Foxy” Fowler, Graeme is renowned for his batting talent and on the pitch personality and often received huge praise such as that from expert cricket speaker and writer Colin Batemen who said Fowler ‘rarely bored anyone with his batting’. A prolific batsman and infectious personality, Fowler is an incredibly popular and sought after cricket speaker and performs at a host of events across the nation.

Making his First Class debut in 1979, Fowler quickly became the first-choice opening batsman for both his county and national team and went on to make his Test match debut just three years later despite a touring ban in place against the apartheid torn South African. Fowler went on to play in more than twenty Tests for England and scored his first double hundred during a nine-hour innings in his Test debut and in doing so became the first Englishman to achieve the feat in India. During his work as a cricket speaker Fowler discusses the perfect start to his International career along with sharing the challenges of Indian conditions.

Scoring Test centuries against New Zealand and the West Indies, Foxy highest One Day International score of 81* came during the 1983 World Cup, during the tournament Fowler also scored four consecutive half-centuries to help England to the semi-finals, averaging 72.00 for the tournament and becoming the first player to achieve the feat of four consecutive fifty-plus scores in a World Cup. In that same year during a match against Leicestershire CCC Graeme scored ten sixes in successive shots and five fours to make a hundred. Fowler is also the only batsman ever to score a century in both innings of a match while employing a runner. During his performances as a cricket speaker Foxy reminisces on the record breaking and remarkable achievements in his career and shares vital lessons that are transferable to all walks of life.

Thanks to his effective and stylish batting capabilities, Graeme Fowler quickly became popular amongst both his team mates and his fans and has remained a much sought after cricket speaker on the corporate function and after dinner speaker circuit since his retirement, with many fans remembering him fondly and calling for stories and anecdotes from his time as a professional.

As well as working as a sports speaker for his national team Graeme Fowler often appears at events for his local cricket club, Lancashire CCC. Following a decade with the team Fowler moved to Durham where he worked as both a player and a coach at the team’s academy. More recently Fowler is best known for his work as the coach of Durham University’s MCCU team where he has helped to develop and nurture the talent on many of English cricket’s brightest prospects. Graeme shares incredibly motivating and inspiring lessons in his work as a cricket speaker and discusses the keys to getting the best out of people and the students he coached.

As well as working as an after dinner speaker Graeme Fowler has worked as a commentator and television and radio presenter since the late 1980’s; he is best known as a guest sports speaker on both Test Match Special and Test Match Sofa. Having suffered with depression, Fowler now works closely with the Professional Cricketers Association to raise awareness and provide support for the condition and openly discussed the complexities and severity of it in his book, Absolutely Foxed.

A true gentleman that has experienced a wonderful and successful career within the game, Fowler’s well rounded knowledge and experience from both life and the game allow him to have an incredibly holistic approach to his performances as a cricket speaker. Incredibly entertaining and hilarious, Graeme has a host of amusing tales and anecdotes to share from his career along with many heartfelt and sincere lessons which together provide a spectacularly moving and insightful event. An extremely prevalent and adored personality in cricket, Graeme ‘Foxy’ Fowler is available to hire as a cricket speaker for any event, dinner or function and is certain to provide an unforgettable performance at any occasion.

When he’s at corporate events, Graeme is known to cover the following topics:

To book Former England Batsman, Graeme 'Foxy' Fowler, as the cricket speaker for your corporate event, function or conference, simply contact the Champions Cricket Speakers agency by filling in our online contact form. Alternatively, call a booking agent directly on 0207 1010 553.