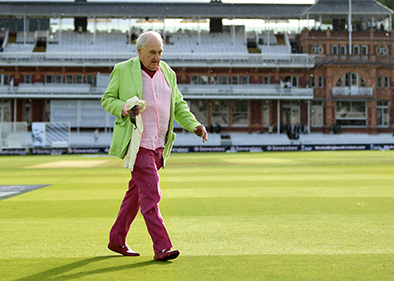 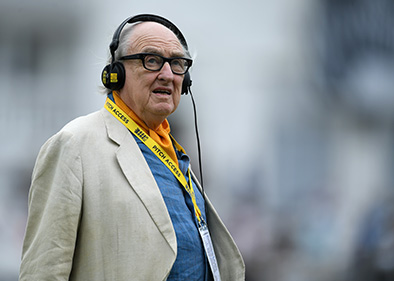 One of the Most Famous Voices in Cricket

Affectionately known as ‘Blowers’, Henry Blofeld OBE is a famous sports journalist most commonly known for his appearances as a cricket commentator on the BBC as part of the Test Match Special (TMS) coverage. A cricket writer, Old Etonian and former Cambridge University student, Henry’s well educated background shines through during his journalism making him renowned for his articulated syntax, establishing himself a reputation as a well-spoken commentator. Popular and well recognisable, Henry Blofeld is an excellent addition to events as a cricket speaker.

Leaving a job in the city as a merchant banker to pursue his dream of becoming a sports journalist, Blofeld came to prominence during England’s tour of India in 1963/4 after reporting on it within The Guardian. Despite nearly receiving a playing call up, Blofeld was left to account for the cricketing exploits which occurred rather than being part of the playing squad. He continued within print journalism until 1972 when he undertook a role as part of the Test Match Special team, having previously dabbled within commentary for ITV during the 60s.

As a cricket speaker Blofeld speaks of his emergence into mainstream broadcasting and commentary and often recounts tales from an incredible distinguished and illustrious career within the game from behind the microphone. Having covered games across the world throughout his career, Blofeld has established incredibly strong relationships with players and officials both past and present and through these affinities is able to provide insightful and unique content during his work as a cricket speaker.

Despite a brief period with Sky Sports during the 1990s, Blofeld has been a prolific cricket speaker with TMS characterised by his idiosyncratic style and mannerisms. His acknowledgement of the minute things make him a firm favourite with listeners, helping them feel like they’re in attendance, a skill which shines through within his role as an after dinner speaker. His prominence as a cricket speaker has bloomed due to his unconventional style, giving guests an unmatchable experience.

A methodical cricket speaker, his reputation as an after dinner speaker has flourished over the last few years. The exploits and successes of England’s cricketers have catapulted Blofeld into a fuller role within cricket commentary, with more and more people tuning in to listen to his opinion and judgement on the proceedings occurring.

The legendary and irreplaceable voice of cricket, Henry Blofeld has for years entertained cricket audiences around the world and has bought ever increasing demand and popularity to radio broadcasting. The godfather of cricket commentary who inevitably revolutionised cricket commentary forever, the fabulous Test Match Special commentator will forever remain a cherished and precious figure in cricket.

Blofeld has also experienced difficulty and trauma in his life and had a double heart bypass operation in 1999 after being diagnosed with angina and was given the last rites after he nearly died in intensive care following the operation. Now fully recovered and having returned to the helm of broadcasting, Blofeld discusses this testing time within his life during his work as a cricket speaker.

A personality etched in the hearts of cricket fans around the world, Henry Blofeld truly is unique and incomparable, so much more then just another broadcaster Henry has captivated the hearts and minds of supporters across the nation. A cricket speaker for the ages and personality who has left their mark on the game, rare feat for a broadcaster or commentator, following his retirement Blofeld’s work and appearances as a cricket speaker have grown largely down to his availability but more so as a result of his prowess as a speaker.

A true legend of cricket and an instantly recognisable and cherished voice, the iconic Henry Blofeld is available to hire as a cricket speaker for any event, dinner or function and is certain to be a fantastic addition to any occasion sure to add great prestige and glamour.

To book Legendary Voice of Cricket, Henry Blofeld OBE, as the cricket speaker for your corporate event, function or conference, simply contact the Champions Cricket Speakers agency by filling in our online contact form. Alternatively, call a booking agent directly on 0207 1010 553.