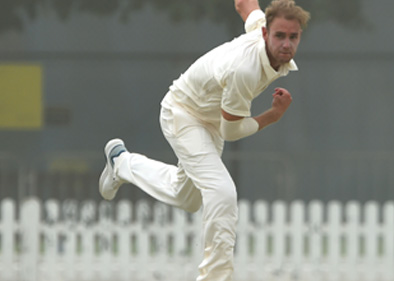 Stuart Christopher John Broad, MBE is an English cricketer who plays Test cricket for England and a former ODI and T20 captain.

A right-arm seam bowler and left-handed batsman, Broad's professional career started at Leicestershire, the team attached to his school, Oakham School; in 2008 he transferred to Nottinghamshire, the county of his birth and the team for which his father played. In August 2006 he was voted the Cricket Writers' Club Young Cricketer of the Year.

Broad was awarded the Man of the Match in the fifth Test of the 2009 Ashes series at the Oval, after figures of 5/37 in the afternoon session of the second day. On 30 July 2011, at the Nottingham Test match against India, he achieved a Test match hat trick in the process gaining his then best Test figures of 6–46. As a batsman, he holds the second-highest ever Test score made by a number 9—he made 169, his only century in first-class cricket, against Pakistan in August 2010. At the start of the summer in 2012 Broad, returning from injury, produced figures of 7 for 72 in a match haul of 11 wickets against the West Indies. He is England's second highest wicket-taker in Test cricket. He has also conceded six sixes of six consecutive deliveries by an Indian batsman Yuvraj Singh in T20 World Cup

When he’s at corporate events, Stuart is known to cover the following topics:

To book English Cricketer, Stuart Broad, as the cricket speaker for your corporate event, function or conference, simply contact the Champions Cricket Speakers agency by filling in our online contact form. Alternatively, call a booking agent directly on 0207 1010 553.