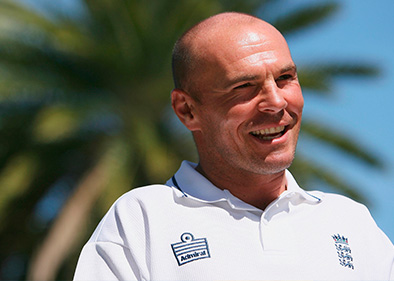 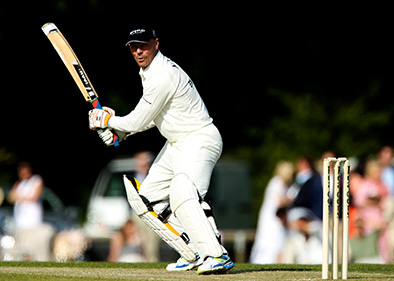 Paul Nixon is a former England, Kent CCC and Leicestershire CCC wicket-keeper batsman who retired from professional cricket in 2011, finishing on a high after claiming the coveted T20 Cup that year. Paul’s extensive and diverse sporting career has led him to be a pre-eminent cricket speaker for after dinner events. The current coach of Leicestershire CCC, Nixon’s energetic and enthusiastic demeanour as both a player, coach and cricket speaker are truly infectious and have led to his ever-growing demand as a cricket speaker.

Born in Cumbria, Nixon made his First Class debut for Leicestershire CCC in 1989 following impressive performances in minor counties cricket where he play for Cumberland. A stalwart at Leicestershire CCC, Nixon’s popularity amongst fans is unrivalled and he remains an incredibly cherished figure at the club. During his time at the country Nixon was a crucial member of the team who were a dominate force in County Championship in the late 1990’s winning two County Championship titles in the space of three seasons. Continually performing on the domestic stage, Nixon established himself as a leading county cricketer despite his lack of International exposure, an achievement that is no mean feat and certainly isn’t achieved easily. A wonderful cricket speaker, Paul has experienced sport at an elite level and has an extensive knowledge of how to achieve goals, realise ambitions and consistently perform to a world-class level.

A brief spell at Kent CCC where he scored two wonderful centuries preceded Paul’s return to his beloved team Leicestershire CCC. A highly skilled wicketkeeper and innovative batsman, Nixon’s ability to adapt to situations was unparalleled and the emergence of Twenty20 reignited his career and spring boarded him onto the global stage. The former Leicestershire CCC captain, Nixon was instrumental to the county winning two Twenty20 Cup victories and fondly reminisces on this glittering period of his career during his work as a cricket speaker sharing fascinating insights into his success and his fondness for Grace Road.

Having consistently performed for over a decade in domestic cricket, Nixon finally gained International recognition when he was selected to play for England in 2007 largely down to his prolific performances in Twenty20 cricket. Representing England in 19 One Day Internationals and International T20, 2007 Cricket World Cup and ended the tournament with the second highest average for a wicketkeeper notably finishing ahead of West Indian legend, Brian Lara.

During his work as a cricket speaker Paul shares fond memories from his International career and is an example of what can be achieved through hard work and dedication over a prolonged period along with being a living example that dreams come true. Renowned for his match winning innings against West Indies, Nixon’s composure and ability to handle pressure, attributes he is renowned for and displays as a cricket speaker led England to a victory against all odds.

An illustrious and distinguished career within the game, Nixon retried from the game following a fairy-tale ending having lifted the Twenty20 Blast trophy, a fitting reward for a cricketer that was arguably the most prominent figure within the competition. Having scored over 20,000 runs in professional cricket to go along with over 1,500 dismissals as a wicketkeeper, Nixon has compiled a host of entertaining tales and anecdotes to share with guests along with an abundance of knowledge and experience that allows his to provide truly insightful and informative content as a cricket speaker.

Following his retirement as a player in 2011, Nixon has turned his attention to after dinner speaking, being sought after as a popular cricket speaker. His smooth and approachable nature has made him a favourite within the industry; a coherent cricket speaker who has had fought a constant battle throughout his career to receive the International recognition he deserves, Nixon has always been a consummate professional whose work ethic and unrelenting pursuit of excellence is unrivalled. An incredibly popular figure, Paul has been a part of numerous business ventures including his involvement in Zing Performance, a psychological programme which he earmarks as a fundamental component to his success. The current coach of Leicestershire CCC, Nixon’s appointment was widely celebrated by fans and the Leicestershire legend is certain to use his motivational and inspirational nature to help transform the club to its past glories.

A multiple winning coach of the Caribbean Premier League and participant in the Indian Cricket League, Nixon’s experiences from being involved in global and prestigious tournaments along with stories he has garnered from playing and coaching some of world crickets biggest superstars, Paul Nixon is a truly remarkable cricket speaker. An entertaining and endearing figure who is certain to captivate audiences, Nixon’s expertise and array of knowledge are certain to a hit with guests coupled with an abundance of entertaining tales from a spectacular career. Former England star, Paul Nixon is available to hire as a cricket speaker for any event, dinner or function and is certain to be a fantastic addition to any occasion.

When he’s at corporate events, Paul is known to cover the following topics: