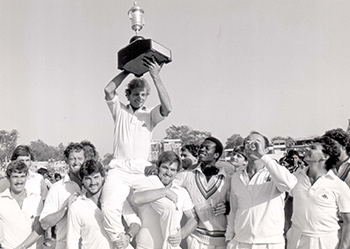 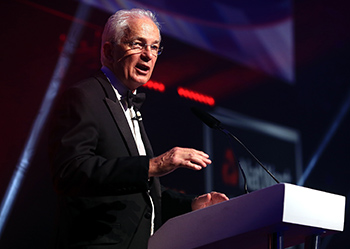 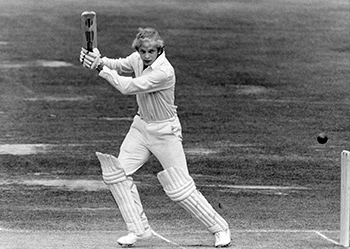 David Gower OBE is a former England cricketer who is widely regarded as the most elegant left-handed batsman of his era. A Leicestershire CCC legend, Gower is now renowned for his extensive work as a cricket commentator working for Sky Sports. During his glittering career, David Gower played 117 Test matches and 114 One Day Internationals; scoring 8,231 and 3,179 runs respectively. David enjoyed a thoroughly distinguished career and is one of the most capped and highest run scoring players for England. A ICC Cricket Hall of Fame inductee, the eloquent and stylish Gower is a tremendously popular personality on the after dinner speakers circuit drawing huge crowds in his work as a cricket speaker.

As a schoolboy, Gower followed in his father’s footsteps as he was awarded a scholarship to attend The King's School in Canterbury, a school at which his father had previously been head boy. A child prodigy, Gower was selected in the school’s cricket First XI aged just 14 and later progressed to be named as the captain highlighting his leadership attributes from a young age. With a lacklustre persona, Gower was cited during his school days for his perceived ‘lack of effort’ and was dropped from the school’s rugby team as a result, this demeanour would remain with Gower throughout his career and garner great criticism. David hilariously bridges this topic during his work as a cricket speaker while still exuding the exact qualities from his childhood!

Making his debut in 1975 for Leicestershire CCC, Gower made 32 on debut and went on to make only another two appearances during that season. Unable to establish himself into the first team regularly for his first few seasons, 1977 became his breakthrough year with a hugely successful one day season in which he amassed 867 runs with a season best of 135*, this being one of two hundreds that year, along with four fifties at an impressive average of 48.16. Having caught the eye of many supporters and selectors around the country, Gower played a further three matches against Sri Lankan opposition and in doing so surpassed 1,000 runs in a calendar year for the first time in his career, scoring 1098 runs at an average of 37.86 which included two centuries and five half centuries, Gower’s form and impressive season led to a call up to the England national team, an experience he often reflects upon with great pride during his work as a cricket speaker.

David Gower made his Test match debut in 1978 at Edgbaston and immediately made an impact, scoring a boundary from his first delivery and announcing himself onto the International stage. David made a half century on his debut followed by another fifty at Lords resulting in a successful first series and selection to play against New Zealand. It was during this series that Gower scored his maiden Test hundred, scoring 111 runs before going on to make scores of 46, 71 and 46 in the remainder of the series earning him selection for the following Ashes Tour of Australia. Reflecting upon the infancy of his Test career during his work as a cricket speaker, David Gower speaks of the change in standard along with the pressures that come with playing at the pinnacle of cricket.

Gower made his Ashes debut at the Gabba, making 44 and 48* in the first Test before making his maiden Ashes hundred in the second Test at Perth. Gower’s initial success in the series came to a halt as he struggled for the next couple of matches before making a meticulous 65 in the final Test at Sydney. England and Gower’s next challenge came in the form of four Test matches against India over the summer of 1979, Gower began the series with what many consider to be the finest innings of his career, he compiled a mesmerising 200* at Edgbaston which will filled with the grace and elegance that Gower will forever be remembered for. This innings along with a quite remarkable year meant Gower was named the Wisden Cricketer of the Year.

Following varying and continued success for both club and country, Gower continued to flourish passing 1,000 runs in the season for almost every year in the remainder of his career. Gower’s career-best First Class season yielded a staggering 1530 runs at an average of 46.36. In his First Class career, Gower made a quite remarkable 26,339 runs at an average of 40.08, including 53 centuries. Predominately representing Leicestershire CCC throughout his domestic career, Gower finished his career at Hampshire signing off in tremendous fashion as he scored a century in the final match of his career.

Internationally, Gower is perhaps best known for the "golden season" he enjoyed during the 1985 Ashes. Captaining his country in what is considered as possibly the fiercest rivalry in sport, Gower scored 86 and 22 in the first Test at Lord's against Australia before making 166 at Trent Bridge. The third Test which was held at Old Trafford saw Gower accumulate 47 before stealing the show at Edgbaston on the 15th of August, scoring a mesmerising 215, a career best score which he immediately followed up with scoring 157 in the final match of the series at The Oval. Involved in two partnerships over three-hundred runs, Gower ended the series with an extraordinary 732 runs at an average of 81.33 and was integral in leading England to a 3–1 victory. David Gower reminisces on this incredible series during his work as a cricket speaker discussing the pinnacle of his career and one of the proudest moments of his life.

Following the passing of his mother in 1986, Gower declined the opportunity to play in the World Cup as he did not wish to travel, having been on nine successive winter tours since his debut. This decision gained huge scrutiny and began what was a controversial twilight period of his International career. Opting to take a joy-ride in two Tiger Moth biplane’s along with fellow teammate John Morris without telling the England team management, he was fined for the incident which followed him walking out of a press conference as England captain as he ‘had tickets to the theatre.’ During the fourth Test at Adelaide, Gower walked out to the crease to the tune of Those Magnificent Men in their Flying Machines and he was dismissed in particularly tame fashion which was met by huge fury by teammate, Graham Gooch. This was not the first time that Gower and Gooch did not see eye to eye, the unfortunate strained relationship between the pair contributed to Gower retiring from international cricket in 1993 after his beliefs did not fit into Gooch’s regime of hard work over talent.

An extraordinary Test career, Gower holds the record of 119 consecutive innings without registering a duck in Test cricket and ended his career with over 11,000 International runs and 25 centuries. Following his retirement, Gower’s infectious personality led to him becoming an extremely successful cricket commentator with Sky Sports analysing matches using his wonderful knowledge gained from a spectacular career.

A television personality alongside his work as a commentator, Gower has been one of the team captains on the hit BBC comedy sports quiz, They Think It’s All Over as well as presenting the BBC Two cricket magazine show. Gower’s popularity is not just national, his incredibly sought after services have seen him spend time commentating on several cricket series working for Channel Nine, with his trademark relaxed calls of play and generous attitude to the players and fellow commentators, proved extremely popular with Australian cricket viewing audiences.

One of the most nonchalant and graceful players that cricket has ever seen, Gower’s languid style and a lack of seriousness which led to a variety of "misdemeanours" from apparently "lazy" shots to practical jokes often overshadowed his tremendous cricketing ability. The exquisite left handed batsman graced fans with his unforgettable brilliance and his truly decorated and turbulent career coupled with his amicable personality make David Gower a fantastic cricket speaker. An English cricketing legend, David Gower OBE has a host of entertaining tales and anecdotes to share at cricket events and dinners. A true cricketing sensation, David Gower OBE is available to hire as a cricket speaker for any event or cricket dinner and is certain to provide an unforgettable performance providing the insight into a legend.

To book Former England Captain & Legend, David Gower, as the cricket speaker for your corporate event, function or conference, simply contact the Champions Cricket Speakers agency by filling in our online contact form. Alternatively, call a booking agent directly on 0207 1010 553.