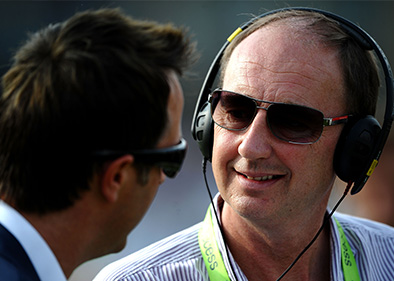 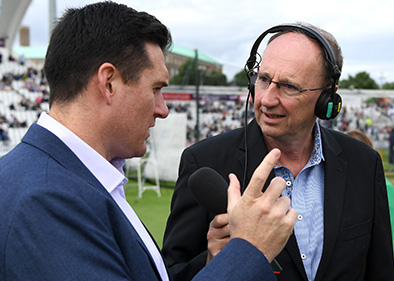 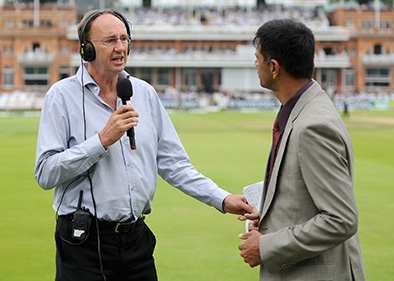 England cricketing legend Jonathan Agnew is a former fast bowler who has since his retirement become incredibly popular as a radio presenter, pundit and cricket speaker. Best known for his time playing for Leicestershire CCC and England, Agnew has become the voice of cricket on the BBC and is a widely respected and recognisable figure in the cricketing world. A spectacular cricket speaker, Jonathon is an extremely sought after dinner speaker across the nation and still remains heavily involved in English cricket with more than three decades of experience to his name.

Agnew’s professional career was spent playing for Leicestershire CCC and England for whom he represented in several Test Matches. Making his First Class debut in 1978 the 18 year old Agnew instantly made an impact as he ripped out the stumps of former England player and fellow cricket speaker David Lloyd before going on a tour to Australia where he stole the headlines, asked to come and bowl at the England team Agnew struck captain Mike Brearley with a nasty blow to the face and his name was soon published in every newspaper in the world. During his work as a cricket speaker Agnew discusses his unusually publicised emergence into cricket as well as sharing what he learnt during tours to Australia in his younger years.

In First Class cricket Agnew took a staggering 666 wickets at an average of 29.25 winning him Test Match caps for England as well as appearances in three One Day Internationals in the mid-1980s. In county cricket, Agnew's most successful seasons came toward the end of his career and bizarrely after his last international match when he had learned to swing the ball, this alone a prime example that no one is ever too old to learn anything, a topic he often breaches during his performances as a cricket speaker. The second and third leading wicket-taker in 1987 and 1988 respectively, Agnew achieved the rare accomplishment of taking 100 wickets in a season in 1987 and was named as one of the five Wisden Cricketer’s of the Year in 1988.

While still a player, Agnew began a career in cricket journalism and commentary and following his retirement as a player pursued this field to become a leading voice of cricket on radio, as the BBC Radio cricket correspondent and as a commentator for Test Match Special. A notorious moment in his punditry career, Agnew's on-air "leg over" remark on Test Match Special which he made to fellow commentator Brian Johnston in 1991, provoked giggling fits during a live broadcast and reaction from across England, the incident was eventually voted "the greatest sporting commentary ever" and makes for truly hysterical content during his work as a cricket speaker.

Over the years Agnew has made a name for himself as a trusted and eloquent sports speaker and now holds an impressive career as one of Britain’s leading cricket speakers and sports journalists. Agnew has become known as the voice of cricket on the BBC and he has published a number of books, including a frank autobiography and anthologies that reflect on cricket throughout history. His writing, much like his publics speaking is expressive, engaging and well informed, making it unsurprising that he is one of the most sought after cricket speakers working on the after dinner speaker circuit.

Further complimenting his work as an after dinner speaker Jonathan Agnew, alongside a number of other well-known cricketers and cricket speakers (including Ian Botham, Geoff Boycott and Graeme Swann) have travelled the UK on theatre tours where they held discussions, seminars and Q&A’s about cricket and the cricket industry.

Available for a range of cricket related events Jonathan Agnew is an incredibly popular choice of cricket speaker, his personality, eloquence and iconic status not only make for entertaining and interesting presentations but also draw large audiences. Widely regarded as one of the fastest bowlers to have ever played for England and as one of the most prominent broadcasters in cricket, the man regarded by adversaries as a ‘master broadcaster’, Jonathan Agnew is available to hire as a cricket speaker for any event, function or dinner and is certain to be a fantastic addition to any occasion discussing all manner of topics including personal trials and tribulations he has endured with family as well as a number insightful cricketing tales.

When he’s at corporate events, Jonathan is known to cover the following topics: