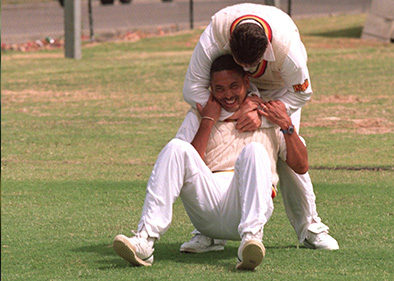 Former England International Phillip Defreitas was a prolific all rounder renowned for his explosive batting style and blistering pace bowling. Holding a remarkable record, Defreitas is the only cricketer ever to have take a five wicket haul against all 18 First Class counties. During his incredibly impressive career, ‘Daffy’ as he is affectionately known played for Leicestershire CCC, Lancashire CCC and Derbyshire CCC along with a stint playing for Boland in South Africa. Currently coaching in both schools and youth cricket, Phillip Defreitas is also an incredibly popular and sought after cricket speaker performing at a host of speaking engagements across the nation.

Making an explosive start to his First Class career for Leicestershire CCC, Daffy registered outstanding figures on his debut taking 3 wickets for just 3 runs before enjoying one of the most productive seasons of his career the following year. In just his 2nd year, Defreitas took a remarkable 94 wickets in the season, his highest season tally and also contributed with his first hundred batting at number 9. This spectacular season earn Phillip selection for the successful 1986/87 Ashes Series as well as being a part of England’s 1987 Cricket World Cup squad. During his work as a cricket speaker Daffy discusses the start of his career along with his first taste of International cricket that allowed him to fulfil his childhood dream.

Defreitas’ most notable appearances include the Test Matches in 1991 and 1994 against the West Indies and New Zealand respectively where he recorded 20 plus wicket series’ on both occasions, whilst in he was named Wisden Cricketer of the Year in 1992. A consistent performer in One Day International cricket, Defreitas was more an economical bowler then a wicket taker in the shorter format however he often made telling contributions through his blistering and explosive stroke play. As a cricket speaker, Phillip Defreitas fondly recalls his time on both domestic and national teams, he shares his experiences of the cricket industry and offers a unique insight into this exciting and changing era of cricket.

Garnering almost 100 caps for England, Defreitas played against some of the best players and most competitive teams in the world and appeared in 44 Test Matches for his country. A regular figure in the England team for over a decade, Defreitas scored over 1,500 International runs and took over 250 International wickets playing in a number of Ashes Series and ICC Cricket World Cup campaigns. Playing his final International match in 1997, Defreitas reminisces on his International career during his performances as a cricket speaker as well as recounting his career highlights and sharing invaluable lessons and advise that he acquired through his career.

A domestic cricket genius, many believe Defreitas did not fulfil his potential in International cricket and suggest he was unable to match his prolific performances in domestic cricket. Winning a host of domestic titles and enjoying success with every team, Defreitas also captained during his domestic career and shares leadership and tactial advice during his work as a cricket speaker. Upon his return to Leicestershire CCC, Phil averaged over 45 with the bat highlighting his tremendous all round ability. A prolific career in county cricket, Defreitas ended his professional career scoring over 15,000 runs in List A and First Class cricket in addition to taking over 1,750 wickets, an outstanding and breathtaking effort. Retiring in 2005, Phillip Defreitas is now a cricket speaker, making irregular appearances on British television working as a commentator and sports speaker.

As well as working as a cricket speaker, Defreitas has also been the cricket master and coach at the prestigious Oakham School in Rutland under fellow ex-England cricketer and sports speaker Frank Hayes and as of 2009 the Director of Cricket at Magdalen College School also in Oxford. Returning to Leicestershire CCC as a coach in the youth set-up, Defreitas is an incredibly well respected and revered figure within the game. A remarkable talent, the extremely gifted all rounder recounts a host of tales and anecdotes from his career that make for thoroughly entertaining content during his work as a cricket speaker as well as sharing the abundance of knowledge and experience garnered from his illustrious career in cricket. Phillip Defreitas is available to hire as a cricket speaker for any event, dinner or award presentation and is certain to be a fantastic addition to any occasion.

When he’s at corporate events, Phillip is known to cover the following topics:

To book Former England Player, Phillip Defreitas, as the cricket speaker for your corporate event, function or conference, simply contact the Champions Cricket Speakers agency by filling in our online contact form. Alternatively, call a booking agent directly on 0207 1010 553.