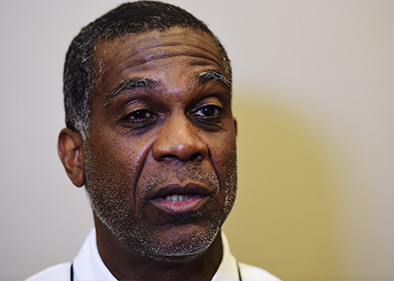 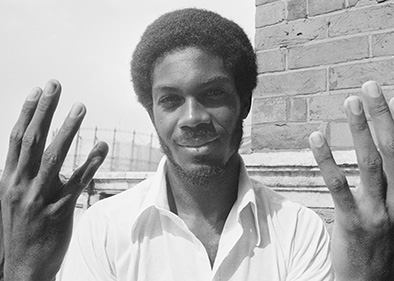 Michael Holding is a former West Indian Cricketer and legendary fast bowler, Holding is still one of the fastest bowlers ever to play Test cricket. Given the nickname ‘Whispering Death’ by umpires, Michael’s silent approach to the bowling crease was one of the best that cricket has ever seen. Holding’s bowling was smooth as well as being extremely fast, striking fear into batsman around the world, Holding successfully used his height to generate large amounts of bounce and zip off the pitch to become of the best fast and most feared fast bowlers to ever play the game.

Holding was a part of the fearsome West Indian pace battery alongside Joel Garner, Andy Roberts, Sylvester Clarke, Colin Croft, Wayne Daniel and the late Malcolm Marshall that destroyed some of the best batting line-ups in the world throughout the seventies and early eighties. During his work as a cricket speaker Holding discusses what it was like to be a part of a team and cricketing dynasty that changed the game for ever and would be a benchmark for years to come.

Michael Holding made an impact early in his Test career when in 1976 he broke the record for the best bowling figures in a Test match by a West Indies bowler taking 14 wickets for 149 runs. A record that still stands to this day, throughout Holding’s First Class career he played for Jamaica, Canterbury, Derbyshire CCC, Lancashire CCC and Tasmania. In June 1988, Holding was celebrated on the $2 Jamaican stamp alongside the Barbados Cricket Buckle. Holding recorded an amazing feat of bowling 5473 deliveries without bowling a single wide, the most by any player in cricket history. Arguably, this is one of the biggest achievements in cricket history.

Dominating consistently in International cricket, Holding certainly made a name for himself in the early part of hi career before he sustained a shoulder injury towards the end of the 1976 tour of England. Holding joined a World XI team to play against Australia in the World Series Cricket which was famously captained by Tony Greig who made outrageous comments before the 1976 Test Series in England. During his work as a cricket speaker Holding describes what it was like to play in the World Series Cricket, a tournament that revolutionised cricket to become what it is today as well as expressing his delight at West Indies’ infamous ‘whitewash’ against England.

In 1979/80, Holding and the West Indies were involved in a highly controversial series that included Holding kicking over the stumps, an action he is not proud of and one he discusses during his work as a cricket speaker. Widely regarded as having bowled ‘the greatest over in Test history’, Holding bowled five blistering deliveries to England batsman and fellow cricket speaker Geoffrey Boycott before removing his stumps. In 1984, he along with legend Vivian Richards set the record for the highest 10th wicket partnership in One Day International history and although he is not known for his batting exploits holds the record for the most sixes by a batsman to score less than 1,000 runs.

Ending his International career in 1987, Holding ended with 249 Test wickets at a remarkable average of 23.68 to go with 142 wickets at 21 in ODI cricket. A quite remarkable cricketer, Holding opened the bowling with Andy Roberts in 33 Tests, and the pair claimed 216 wickets at an average of 25.27 runs each making them one of the most successful new ball partnerships. In professional cricket Holding took over 1,100 wickets at an outstanding average of under 23 and during his performances as a cricket speaker Michael reminisces on his fine career while sharing a his knowledge and experiences from his time as a player.

After an extremely successful career in cricket, Holding has become an incredibly popular and well respected broadcaster as a member of the Sky Sports cricket commentary team as well as featuring as regular member of Channel 9’s cricket commentary team in Australia. A smooth and velvety voice, Holding is cherished and revered by fans around the world for both his career as a player, punditry exploits and work as a cricket speaker. Michael has also released three books, with the most recent titled 'Why We Kneel, How We Rise' which explores racism in today's world.

When he’s at corporate events, Michael is known to cover the following topics: