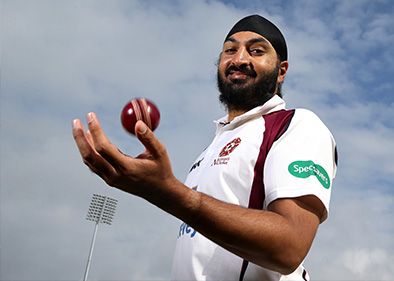 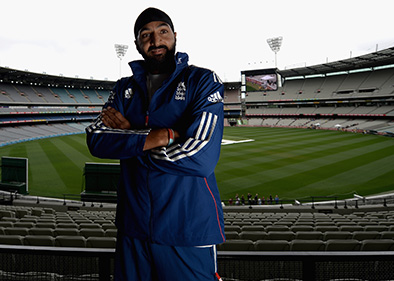 Cricket Legend Monty Panesar is an English cricket player known for being one of the greatest spin bowlers in England. A personality who is renowned for his performances on and off the field, Panesar’s impressive career has spanned over many years and has seen him play in several International games. Monty played his first Test Match in 2006 against India and since then became a national sporting sensation due to his cricketing exploits and entertaining antics. An incredibly high profile cricketer who has often been at the centre of media coverage, Monty Panesar has also worked extensively as a cricket speaker across the nation.

Described as the ‘best finger spinner in the world’ by former England coach Duncan Fletcher, Panesar was originally a medium pacer before he changed to bowling slow left arm. Making his debut for Northamptonshire CCC, Panesar took 8 wickets on his debut before he became a more important member of the team and had a fine season in 2005, taking 51 County Championship wickets at an average of just 22.47. Panesar’s wonderful performances led to International recognition as he was selected to play against India and his first wicket was to be none other then Indian legend, Sachin Tendulkar. During his work as a cricket speaker Monty discusses his path to professional cricket as well as sharing details and memories from his unforgettable debut.

When first selected for England Panesar was widely perceived as being a particularly inept batsman and fielder, praised for his unrelenting and highly impressive work ethic, Panesar left Northampton to join Sussex County Cricket Club in an attempt to reignite his career and a 52 wicket debut season for the county certainly did that and he was recalled to the squad for the 2010–11 Ashes Series, although he did not feature in any matches.

After taking 69 wickets in the 2011 County season, Panesar earned a recall for the series against Pakistan in the UAE where he played in the second Test, his first Test appearance in over two and a half years. On the 11th of June 2007, he became the first English spinner to take ten wickets in a match since Phil Tufnell. Panesar also played in 3 Test matches in India in 2012 and was a crucial member of the team that made history in India. By winning the series England became the first team since 2004 to beat India on their home soil and the first England team since the 1984–85 tour to beat India in India. Panesar ended that series with 17 wickets and during his work as a cricket speaker discusses the drive and determination that was required to comeback from the setback and adversity he faced.

Making headlines both on the pitch, Monty Panesar left Sussex to join Essex CCC before returning to play for Northamptonshire CCC once again. A cricketing personality who is quite the character, Monty has brought joy to cricket fans around the world often at his own expense and he has also been involved in his fair share of controversary and mental health issues all of which he shares during his work as a cricket speaker.

Known for his charisma and abundance of personality, which he retains in all his work as a cricket speaker, Monty Panesar is without doubt one of the most talented spinners to have ever played for cricket. A truly unique individual who has experienced a journey like no other in cricket, the infamous Monty Panesar is available to hire as a cricket speaker for any event, function or dinner and he will most certainly be an extremely entertaining and hilarious addition to any occasion.

When he’s at corporate events, Monty is known to cover the following topics:

To book Former England Spin Bowler, Monty Panesar, as the cricket speaker for your corporate event, function or conference, simply contact the Champions Cricket Speakers agency by filling in our online contact form. Alternatively, call a booking agent directly on 0207 1010 553.