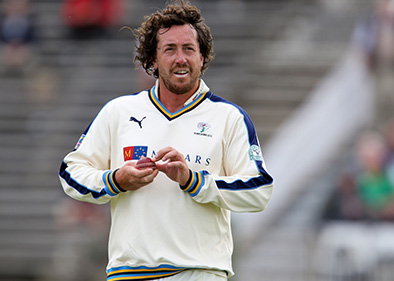 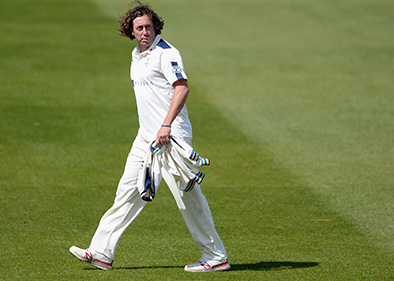 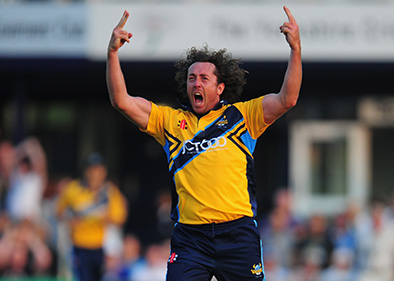 Ryan Sidebottom is a former cricketer who enjoyed a decorated domestic career for Yorkshire CCC and Nottinghamshire CCC as well as being an incredibly successful performer for England. Retiring in 2017 having taken over 1,000 wickets during his career, Ryan is the only player in the last 15 years to have won the coveted County Championship title 5 times and his record of success also translated to International cricket where he was an indispensable member of the 2010 ICC World Twenty20 cup victory. An immensely talented left-arm seam bowler who possessed the ability to bowl with great speed and extract extreme and effect swing, following his retirement Sidebottom has become an incredibly popular and sought after cricket speaker appearing at both cricket and business event across the nation.

Making his debut in 1997 for Yorkshire CCC, Sidebottom won the NBC Denis Compton Award two years running and in the latter season he finished as the leading domestic English-bowler conceding just 12.5 runs for each of his 24 wickets and capped off this wonderful year with a nomination for Cricketer of the Year by the Cricket Writers' Club. A successful England A tour over the winter where Ryan once again impressed led to International recognition when he made both his Test Match and One Day International debuts in 2001. As a cricket speaker Sidebottom discusses the path and journey that led him to becoming an International superstar as well as expressing his affinity to Yorkshire CCC.

Sidebottom left Yorkshire CCC to join Nottinghamshire CCC at the end of the 2003 season in a bid to reinvigorate his International career and fulfil his lofty ambitions. Having taken 163 wickets for Yorkshire at an average of 25 before his departure, at Nottinghamshire Sidebottom continued to enjoy wonderful domestic performances taking over 50 wickets in both the 2005 and 2006 seasons and helping the club to promotion before helping them to win the coveted County Championship title in 2005. Winning the Nottinghamshire CCC Player of the Year as a result of his superb performances and exploits, Sidebottom once again gained the attention of England supporters and upon his reselection for national team made an immediate impact taking four wickets in the first innings and a total of eight wickets in the match. As a cricket speaker Sidebottom explains the drive, determination and resilience that was required to deal with the setbacks and comeback stronger to win back his place in the England team.

Sidebottom went on to become an integral member and regular fixture in the England team and was named the England Player of the Year in 2008 and named the Man of the Series against Sri Lanka in 2007 & New Zealand in 2008 where he broke a record to become the first bowler to take 3 five wicket hauls in one series. Sidebottom’s fantastic year went on to earn him further accolades too as we was named the Wisden Cricketer of the Year and included in the ICC test Team of the Year in 2008. Ranked 6th in the world at the time, Ryan was the highest ranked England bowler for many years in International cricket. During this purple patch of his career Ryan Sidebottom also took a famous hat trick in Test match against New Zealand and by doing so became only the 37th bowler in Test cricket and 11th Englishman to do so.

Arguably Sidebottom’s highlight in an England shirt came during 2010 when he was crucial in England winning the ICC Twenty20 World Cup with Ryan regularly contributing by taking wickets at both the start and end of the innings. Retiring in 2010 following the memorable World cup victory, Sidebottom said "If I look back on my international career I have achieved more than I could ever have dreamed. I have had a truly fantastic period of my life with England. Winning the Twenty20 World Cup in the West Indies, my Test debut at Lords, a Test hat-trick against New Zealand, plus a Man of the Series award are just a few of the highlights."

Returning to Yorkshire CCC in 2011, Sidebottom was a part of two more County Championship winning campaigns leading his career tally to five championship titles along with a C & G Trophy. A Yorkshire CCC legend, Ryan Sidebottom ended his professional career with over 1,000 wickets and over 50 England caps. A glittering career, during his work as a cricket speaker Ryan fondly looks back on his career and shares his highlights and advice on what led to his success.

Following his retirement, Ryan has worked as a coach and TV personality, in 2013 he set up Ryan Sidebottom Cricket Academy which he runs along with his handpicked team of ECB qualified coaches. He is passionate about developing young talent and also has his own foundation for under privileged children, the children receive regular weekly coaching free of charge from himself and his coaches. He can often be seen on the panel of Question of Sport and enjoys a spot of tom foolery when posing as ‘Mystery Guest’ having once dressed as Beyonce and performed a dance routine with backing dancers, managing not to have his identity guessed!

A true gentleman, Ryan is also ambassador for three charities, Martin House Children’s hospice, Fable and Melanoma UK. Instantly recognisable largely due to his distinct appearance and phenomenal career, the former England and Yorkshire legend Ryan Sidebottom is available to hire as a cricket speaker for any event, dinner or awards presentation.

When he’s at corporate events, Ryan is known to cover the following topics:

To book Former England Fast Bowler, Ryan Sidebottom, as the cricket speaker for your corporate event, function or conference, simply contact the Champions Cricket Speakers agency by filling in our online contact form. Alternatively, call a booking agent directly on 0207 1010 553.