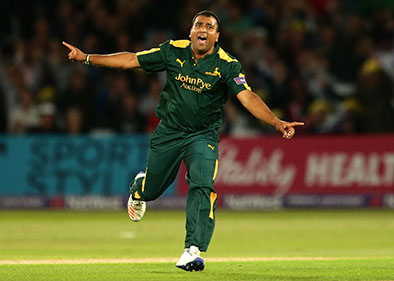 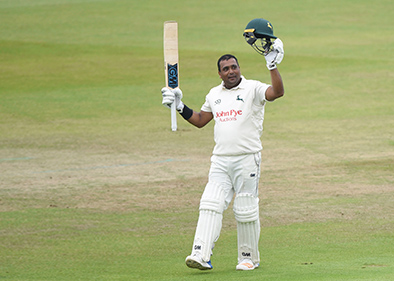 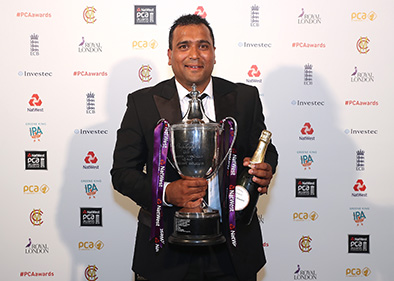 A remarkable talent, Samit Patel is a current cricketer that plays for Nottinghamshire CCC and has also played for England. A wonderful all-rounder, Patel consistently contributes to the team in all three formats of the game and is amongst the most prolific players in the domestic game. A hard-hitting middle-order batsman and a more-than-capable slow left-arm bowler, has been one of the most watchable county cricketers of his generation however he has certainly been less fortunate in International cricket where there is an undeniable feeling by all that Samit has been hard done by and should have played many more games for England. A stalwart at Trent Bridge, Patel continues to go from strength to strength and is enjoying somewhat of a purple patch in his career alongside his work as a cricket speaker.

A childhood prodigy, Patel represented England at ever youth level as well as making his Nottinghamshire CCC 2nd XI debut at the age of just 14. Awarded the Test Match Special Young Cricketer of the Year award in 2000 for his impressive performances in the Under-15 World Cup, Patel was destined for great things after making his debut for Notts aged 16 and featuring consistently for the team in both First Class and List A cricket. Some of Samit’s most eye-catching performances came in Twenty20 cricket, including a unique double-wicket maiden against Derbyshire CCC in 2006 it was however in 50-over cricket that he first attracted the interest of England's selectors who subsequently selected him in his first International squad for the 2008 Champions Trophy. An eloquent cricket speaker, during performances Patel discusses the success he enjoyed at a young age as well as disclosing what it was like to be a childhood prodigy with the weight of expectation on his shoulders.

Patel embarked upon what would be somewhat of a rollercoaster journey in International cricket, impressing during his breakthrough season in 2008 where he played 11 One Day Internationals. A highlight in the infancy of his International career came when during a haul of 5 for 41 to beat South Africa at The Oval. With many thinking this early success coupled with his tremendous pedigree in domestic cricket would propel him to much greater things however his career stagnated amid repeated failures to respond to the cajoling of the England management and get into the gym to sort out his waistline. The county circuit did not lack for stories about accidents on treadmills or his penchant for chocolate bars and Patel’s fitness woes became publicly documented. A huge struggle filled with scrutiny and criticism followed for Patel with many questioning his desire in the game, an incredibly testing time both physically and mentally, Samit discusses the adversity he faced during this period along with the tenacious drive and determination he showed to comeback from this setback.

Patel worked hard enough at his fitness before the 2011 season to have reached the basic targets laid out by England and he was rewarded with a recall to the limited-overs set-up after a strong start to the summer with Nottinghamshire CCC, his first involvement for two-and-a-half years.

His work paid off as he passed 1,000 runs in a season for the first time and took 33 wickets for Nottinghamshire. He was one of few players to come out of England's ill-fated one-day tour of India in credit with 160 runs 40.00. Going on to play Test Matches once again in the subcontinent where selectors felt conditions would best suit him, Patel’s appeal to England was somewhat wavering and the lack of certainty over his role in the team began to adversely affect him. Patel discusses his time in International cricket as a cricket speaker as well as sharing his disappointment and feelings about the treatment and lack of opportunities he has received.

A phenomenal domestic cricketer, Patel is renowned for his devastating and elegant stroke play which has seen him singlehandedly win many games of cricket however his meticulously accurate left arm spin has often been underrated, his slow left-arm was never more valuable for Notts than in the 2013 YB40 Final at Lord's when a spell of 3 for 21 from seven overs helped Nottinghamshire beat Glamorgan and win their first limited-overs trophy for more than 20 years. Arguably his best was still yet to come and in 2017 he enjoyed a truly stellar season.

An integral and indispensable member of the Nottinghamshire CCC team, Patel guided the club to promotion alongside winning both limited over trophies on offer. His unbeaten 122 against Essex at Chelmsford as Notts pulled off a record 50-over chase in the semi-final was not just a fine innings but wonderful theatre. He took the man-of-the-match award in the T20 final at Edgbaston for his 64 off 42 balls against Birmingham Bears, completing his second run-out of Finals Day for added theatre. He then bemoaned - as was his habit - that England's selectors had not been in touch. Patel won both the PCA's Most Valuable Player award and the Players' Player award - the first recognition for a Notts player since Richard Hadlee 30 years earlier. He had not always had the happiest relationship with England, but the accolade from his fellow professionals was a show of respect that left him "chuffed to bits".

Following on from this incredible season for Nottinghamshire where he was crowned the most valuable player in the country, Patel’s talents were in demand as he was drafted to play in the Pakistan Super League where his performances were once again prolific earning him a place in the tournaments best XI and guiding his team to victory. A spectacular talent, Samit Patel has consistently been a special player for over a decade and continues to perform at the highest level in hope of the recognition he truly deserves at International level. An enigmatic and entertaining cricket speaker who has an incredibly insightful and unique story to tell, Samit Patel is available to hire as a cricket speaker for any event, dinner or presentation evening and is certain to be the idyllic addition to any occasion.

When he’s at corporate events, Samit is known to cover the following topics:

To book Nottinghamshire CCC & England All-Rounder, Samit Patel, as the cricket speaker for your corporate event, function or conference, simply contact the Champions Cricket Speakers agency by filling in our online contact form. Alternatively, call a booking agent directly on 0207 1010 553.