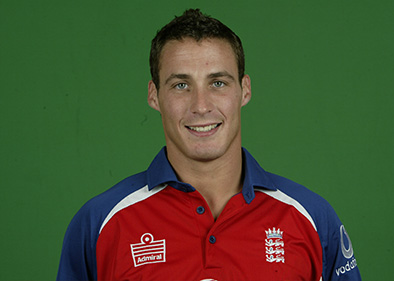 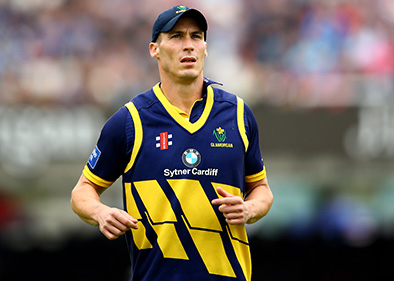 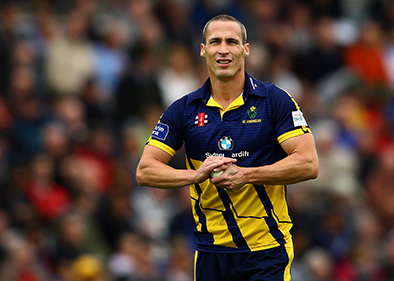 Simon Jones is a former England cricketer that played First Class cricket for Glamorgan CCC, Worcestershire CCC and Hampshire CCC but is best known for his heroics during England’s historic 2005 Ashes victory. A strapping and skiddy fast bowler, Jones became renowned for his incredible ability to swing the ball and in particularly for being an expert of reverse swing bowling which played an integral part to him taking 18 wickets in that momentous series. A career destined for greatness that was cut short due to a devastating injury that forced early retirement, Simon Jones is now an incredibly popular cricket speaker travelling the UK to give a unique insight into arguably English cricket’s greatest series win.

An entire career that has been overshadowed by injury, Jones began his First Class career with home county Glamorgan CCC and consistently impressed to eventually make his Test debut for England at Lord’s Cricket Ground. Showing signs of great promise early into his Test career against India Jones was selected for the 2002-03 Ashes Tour down under and was earmarked as England’s great hope. His tour however ended abruptly on the opening day of the series at Brisbane, when he slid to prevent a boundary and agonisingly ruptured a cruciate ligament in his right knee. A devastating and potentially career ending injury, Simon fought back courageously after a six-month lay-off aided and motivated by the memories of the taunts he had received while laying stricken on the outfield and by March 2004 return against all odds to prepare himself for a tour of the Caribbean. A quite remarkable recovery in itself without taking into account what he achieved upon his return, Jones talks about the journey through his rehab and the drive and determination that was required to recover from this awful injury.

Upon his return to the Test arena, Jones played in all four tests in the West Indies taking 15 wickets including his first five wicket haul in Test cricket. Dismissing the legendary West Indian batsman Brian Lara, Jones was also a part of the in which Lara famously scored 400 not out and a match that Jones recollects during his work as a cricket speaker. Still finding his feet and returning to his former self following the injury, Simon showed signs of a full recovery against South Africa in the lead up to the 2005 Ashes when his inspired fourth-day spell and incredible diving catch at fine leg secured a notable victory over South Africa and cemented his place in the Test team. By the start of the 2005 season, Jones had regained the yard of pace he had mislaid after his injury and added a new and mysterious extra element to his repertoire in reverse-swing. During his performances as a cricket speaker Jones shares the delight he felt at returning to the International game along with discussing the wonderful performances that gave him huge confidence going into the Ashes.

Impressing and succeeding in the One Day International series against Australia that preceded the Ashes series, Jones was ready to do something special and memorable. Contributing in the first two Test matches of the series, Jones came into his own in the Third Test and will forever be remembered for his exploits in the game. Jones picked up the wickets of Ricky Ponting, Adam Gilchrist, Shane Warne, Michael Clarke, Jason Gillespie, and Brett Lee as he collected figures of 6–53, his best bowling innings before adding the wicket of Michael Clarke in the second innings in which Jones bowled a spectacular reverse-swinging delivery which Clarke left expecting the ball to swing away but instead swung back towards the batsman and uprooted his off-stump. Taking another five wicket haul in the fourth Test including a wonderful in swinging delivery to dismiss Ricky Ponting, Jones sustained an injury in the second innings meaning he would take no further part in the series. Missing the last Test match, Jones had already made a significant impact and England famously drew the last match to famously win the series 2-1 with Jones’ 18 wickets being a huge factor in the victory. The proudest moment in his career, Jones fondly reminisces on this historic series and achievement during his work as a cricket speaker.

Following his heroics in the Ashes that brought huge praise and adulation, Jones once again sustained a major injury that despite his greatest efforts led to becoming a career ending injury when he was unable to fully recover in spite of surgery and medical advice from experts around the world and various moves in the county game. Eventually announcing his retirement after only being able to play sporadically and being hampered when he did play, Simon Jones ended what was a short but incredibly impactful career in the game. One of very few bowlers to have a strike rate below 50, the devastating fast bowler is available to hire as a cricket speaker for any event or function and is certain to provide an incredibly insightful, moving and inspirational performance at any occasion.

When he’s at corporate events, Simon is known to cover the following topics:

To book Ashes Winning Hero, Simon Jones MBE, as the cricket speaker for your corporate event, function or conference, simply contact the Champions Cricket Speakers agency by filling in our online contact form. Alternatively, call a booking agent directly on 0207 1010 553.