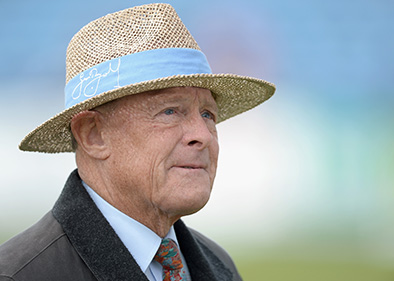 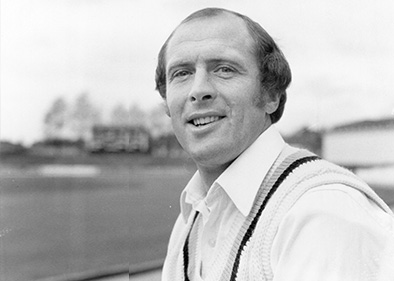 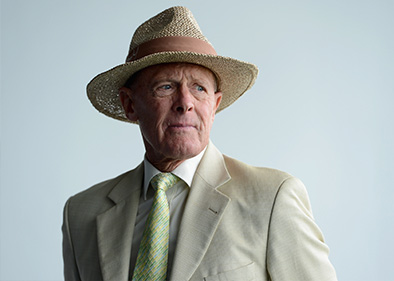 Legendary England batsman and the self-proclaimed ‘Greatest Living Yorkshireman’, Geoffrey Boycott OBE enjoyed a staggeringly successful career in Test cricket. A prolific yet somewhat controversial player and personality, Boycott is widely regarded as one of the most successful openers to have ever played for England. Renowned for his ability to occupy the crease and compile huge scores, Geoff Boycott scored over 150 First Class hundreds as well as representing England in 105 Test Matches. A remarkable talent with a tenacious drive to succeed, since his retirement as player Boycott has become a prominent and somewhat controversial and outspoken commentator and pundit alongside his work as cricket speaker where he is in huge demand and regularly commands large audiences during his performances.

A proud Yorkshireman, Geoffrey played the entirety of his English domestic career for the county and amassed a staggering 48,426 First Class runs in addition to over 10,000 List A runs including almost 160 centuries during this period. The only player ever to average over 100 in a season twice in their career, Boycott was a prolific batsman for Yorkshire and also captained the county for almost a decade. Earmarked by legendary umpire Dickie Bird from a young age, Bird remembered Boycott for his "application, concentration and absolute belief in himself. He had one great gift, mental strength. You can have all the coaching in the world but the most important thing is to be mentally strong."

In what can only be described as a truly spectacular Test Career, in Boycott’s 105 appearances he scored over 8,000 Test runs at a superb average of 47.72 meant Geoffrey ended his Test career with the highest completed career average among England players since 1970. A true perfectionist, Boycott’s 22 Test centuries make him joint 3rd in the list of Test match centurions for England and England quite remarkably never lost a Test match in which Boycott scored a century. During a Test career that was filled with ups and downs, Boycott went from being the linchpin of the England team to exile and numerous controversies. Undoubtedly at the centre of controversy during his career, during his work as cricket speaker Boycott shares a host of tales and anecdotes from his legendary career and provides a unique insight into his psychology and the key ingredients that led to his International dominance for almost two decades.

Known for a largely successful and occasionally controversial playing career Boycott graduated to working as a pundit and sports speaker in the 1980’s and was immediately applauded for his intelligence and professionalism, with fellow cricket speaker and statistician Simon Hughes calling him “fastidious”. A personality who commands the highest of standards and has an undeniable ideology of how the game should be played, Boycott regularly heard criticising performances and players and consistently speaks his mind much to the amusement of viewers.

Continually hounded by the press, with a number of incidents and altercations affecting his cricketing career; his outspoken and intellectual commentary often catching the attention of both audiences and adversaries alike. Boycotts high profile status has helped to secure even further positions as a commentator and cricket speaker, presenting and providing commentary services for the BBC and several UK and Asian satellite channels throughout the 90’s. Working extensively for Channel 4, Cricket on 5 and talkSPORT, Boycott’s unique style of punditry has led to his increased popularity as a cricket speaker.

Faced with huge adversity in 2003, Geoffrey was diagnosed with throat cancer and therefore was forced to take some time out of working as a cricket speaker to undergo treatment. In usual fashion however, Boycott returned with a vengeance and became one of the most easily recognizable cricket speakers in the UK when he signed a high profile contract commentating for Channel 4. Involved in controversy both on and off the pitch, Boycott has experienced testing times in his personal life which led to extensive media coverage and scrutiny similar to what he received as a player. An incredible ability to comeback from setbacks and deal with adversity, during his work as a cricket speaker Boycott discusses difficult periods of his life and in doing so engrosses the audience to provide a touching yet inspirational performance.

Outside of his work as a cricket speaker, Boycott remains heavily involved in his home Yorkshire team and has continues to identify and guide young home-grown players to the British sport. The former President of Yorkshire County Cricket Club and instantly recognisable figure, Geoff Boycott remains a very popular cricket speaker, his pull-no-punches approach to commentating has, though often controversial, made him incredibly popular with many cricket fans and continues to bring in a large audience to all events.

A ICC Hall of Fame inductee, former Wisden Cricketer of the Year, record breaking batsman, opinionated pundit and cricketing legend, Geoffrey Boycott OBE is available to hire as a cricket speaker for any event, function or occasion and his addition to any dinner is certain to increase the prestige and superiority with Boycott recounting a host of thoroughly entertaining tales and anecdotes from his illustrious career.

When he’s at corporate events, Geoff is known to cover the following topics: