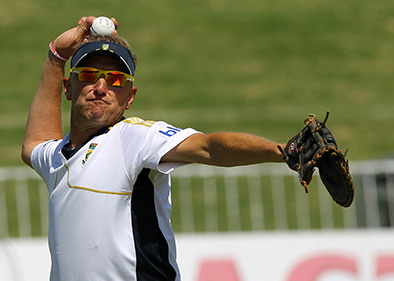 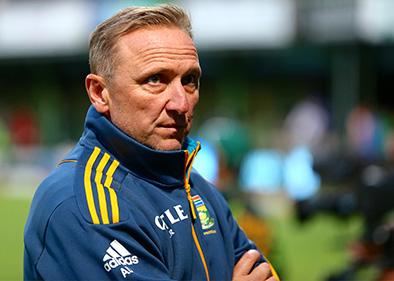 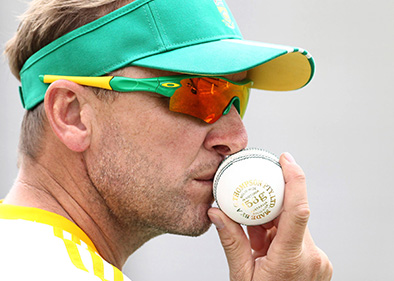 Allan Donald is a former South African cricketer. Often nicknamed ‘White Lightning’, he is considered as one of Proteas most successful pace bowlers in world arena. He was one of the top fast bowlers in Test cricket, reaching the top of the ICC Test Rankings in 1998 and peaked with a top ICC ranking of 895 points the next year. In ODIs, he reached 794 points in 1998, ranked second behind teammate Shaun Pollock. He shared the new-ball with Pollock from the 1996/1997 tour of India until his retirement in 2002.

He made his Test debut on 18 April 1992 in South Africa’s first test since their return to world sport after the abolition of apartheid. South Africa lost to the West Indies in Barbados by 52 runs. Donald took 2–67 and 4–77, including the wicket of Brian Lara. When he retired, he was South Africa’s record wicket-taker with 330 Test wickets at an average of 22.25, and claimed 272 One Day International wickets at an average of 21.78.

During the Trent Bridge Test Match of 1998, South Africa batted first, scoring 374 in their first innings. England responded with 336, with Donald taking 5 wickets. In their second innings, South Africa only scored 208 leaving England a target of 247 to win the match.

Michael Atherton was at the crease when Donald began a spell of bowling both would later describe in their respective autobiographies as one of the most intense periods of Test Match Cricket they ever played. Donald bowled multiple bouncers to Atherton, but he survived several close chances to remain not out at the end of the day. The next day Atherton along with Alec Stewart were able to score the remaining runs, with Atherton finishing on 98. Several years later, Atherton gave Donald the gloves he wore on this occasion for Donald’s benefit year auction. During his work as a cricket speaker Donald expands on this historic battle which many feel was the most intriguing and captivating passages of all time.

In the 1999 Cricket World Cup semi-final between South Africa and Australia Donald was the last batsman on the South African team. Australia batting first making only 213, Donald taking 4–32 and Pollock 5–36.

The game swung back and forth with South Africa eventually needing to score 16 runs off the last 8 balls to win with only one wicket remaining. Lance Klusener and Allan Donald were at the crease. Klusner hit a six and then a single to keep the strike, followed by two fours. The scores were level with four balls left in the game. The next ball resulted in no run. Klusner hit the ball after that straight down the ground and set off for a single, but Donald was watching the ball, and missed the call to run.

Both batsmen were at the bowler’s end before Donald started running, having dropped his bat. The ball was thrown to the bowler, then to Gilchrist, who broke the stumps at the other end, with Donald only halfway down the pitch. Although the match technically ended in a tie, South Africa had previously lost to Australia in the Super-Six phase, and needed to win outright to progress to the final. An agonising end to the tournament and his nations hopes, Donald discusses this calamity in greater depth and attempts to provide an explanation for the disaster that occurred during his work as a cricket speaker.

One of the most feared and respected cricketers of all time, following his retirement as a player Donald has worked as a commentator and pundit but his main work alongside being a cricket speaker has been as a coach. Having a wealth of experience and expertise, Donald has been called upon as a coach for England, South Africa, Warwickshire CCC, Kent CCC and Royal Challengers Bangalore to name a few and these coaching ventures further add to his already extensive and diverse content as a cricket speaker as he shares advice on coaching as well as disclosing unique and insightful accounts having worked with some of the best and most exciting players in world cricket.

One of the most successful South African players of all time and one of the greatest fast bowlers in cricketing history, Allan Donald has a host of entertaining and insightful tales and anecdotes to share with guests along with an extensive collection of knowledge and experiences that will undoubtedly captivate guests during his work as a cricket speaker. A fast bowling legend and cricket icon that struck fear and dread into batsman around the world, Allan Donald is available to hire as a cricket speaker for any event, function or occasion and ‘White Lightning’s’ presence is certain to add to the prestige of any occurrence.

When he’s at corporate events, Allan is known to cover the following topics: